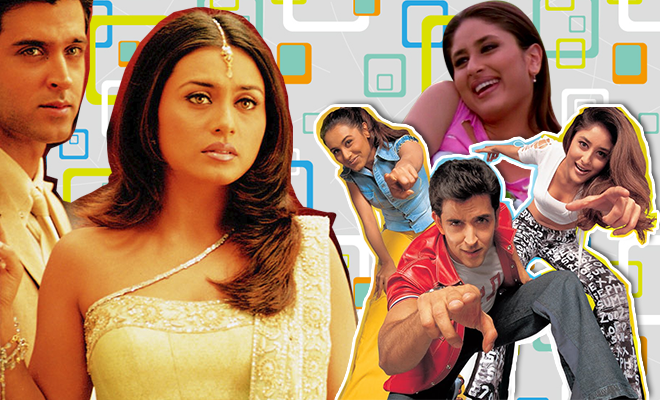 Mujhse Dosti Karoge Completed 17 Years Today. And We Take You Through The Storyline. It’s So Bad!

When Hrithik Roshan made his debut with Kaho Naa… Pyaar Hai, like several other girls, I went bonkers! I was head over heels in love with him, because… there’s no because needed! He looked perfect, with that chiselled jaw and infectious smile. He was super adorable. Which is probably why, I watched every single movie that he starred in. In restrospect, that’s a lot of hours of time spent doing entirely inane things. At least, that’s how I would like to justify me watching Mujhse Dosti Karoge, till the very end. Today, the movie which also starred Rani Mukerji, Kareena Kapoor and a very left out Uday Chopra completed 17 years. Which made me want to revisit the hideousness that this movie subjected us to.

For those who have forgotten all about this movie, voluntarily or involuntarily, let me give you a glimpse into this treasure from 2002.

Mujhse Dosti karoge is a convoluted mix of friendzone and relationship issues featuring Raj (Hrithik Roshan), Tina (Kareena Kapoor) and Pooja (Rani Mukerji). So when they were kids, Raj moves to London with his fam, and Tina, the popular girl he is attracted to, promises to stay in touch. Except that she is too self-absorbed to bother about him, so Pooja decides to write to him pretending to be Tina. Now they have fallen in love with each other – Tina and Raj- over emails. Except, with no pictures being shared (a rule they are following apparently and for no good reason) Raj thinks he is in love with Tina, but he is in love with Pooja. What the fuck is happening?

If that killed your brain cells, wait. It gets worse. Raj comes visiting and he doesn’t friendzone but rather lampzone Pooja, because she is not charming (read fair) enough. It’s like Pooja becomes this dress in your wardrobe that is too deep down in your pile of clothes to be noticed. And for some reason that baffles me, Pooja doesn’t even attempt to clarify things, while Tina just plays along pretending she has written all those emails except she hasn’t even been in the vicinity of a keyboard. Why even? Honestly, both of them were shallow AF. Raj went purely for looks, and Tina was like okay, my little assistant did all the work now let me enjoy the fruits of 15 years!

Also, Tina’s intelligence quotient is probably just slightly higher than a five-year-old’s. Throughout the movie, you can see Raj making it super obvious that he is in love with Pooja but Tina doesn’t get the hint. Short of stripping down and indulging in some sweaty, horny sex right in front of them, these guys leave plenty of very obvious clues that they dig each other. She finds him alone in Pooja’s room with the door locked from inside. Sure, that’s normal. The two share an intensely romantic moment in the rain, in front of the entire fam jam, but still no reason to doubt. Wow, this woman here is every guy’s dream.

ALSO READ: In 1997, People Were Offended By A Song Because It Defamed UP And Bihar. That The Songs Were Offensive To Women Is Okay!

Now there is nothing smart or mature about this movie. Because Pooja decides to marry Rohan so Raj can marry Tina. You know, sacrifice and shit. Rohan, who? Uday Chopra. He is Raj’s friend who has the hots for Pooja. Has Pooja ever spoken to Rohan? No. Does she have any say in getting hitched to him anyway? No. Does anyone care about Pooja? Clearly, no.

At this point, we are really hoping some brain cells can survive this apocalypse. At the end, some Raj accidentally drops some sindoor on Pooja’s forehead, and that’s when Tina backs out. At the end, she is like I am happy I have such good friends. And Rohan is …well nobody really cares. If this was made today, it could have been called Student Of The Year 3. Thankfully, nobody has thought the genius idea to remake this disaster.

The Poster Of Judgementall Hai Kya Is “Inspired” By The Work Of A Hungarian Artist. Come On, Where’s Our Creativity?(Opens in a new browser tab)