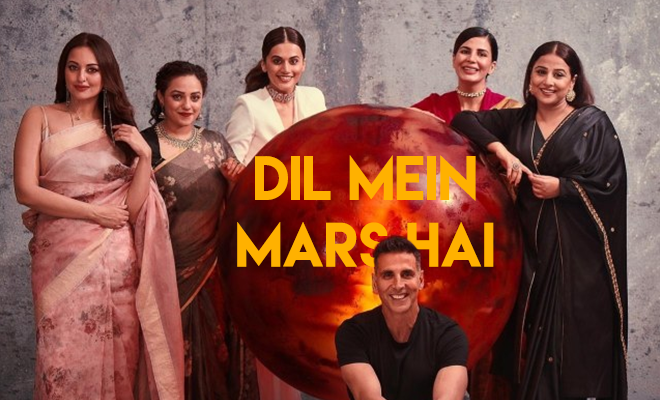 The much talked space mission film, Mission Mangal recently released its most-awaited trailer and rightly so, it got fans of science and patriots around the country all excited. While we can’t confirm this, we believe this may be the first film based on the space mission in India and it’s definitely got all the makings of a blockbuster. Akshay Kumar will be seen essaying the role of a senior scientist in the film, which is based on Indian Space Research Organization (ISRO) scientists who worked on the Mars Orbiter Mission (MOM). A huge female star cast including Taapsee Pannu, Sonakshi Sinha, Vidya Balan, Nithya Menen, Kirti Kulhari and Sharman Joshi will also seen in key roles in the film.

Also read: The Mission Mangal Trailer Is Out, The Women Are Playing Key Roles And It Will Give You Goosebumps

Today, the first song of this movie Dil Mein Mars Hai  and in the video we see the entire star cast giving their all time and effort in order to achieve their goal. We get a sneak peek into the preps that went into making the mission a success and we are glad that each one of the actors has a distinct role in the movie. Talking about the songs title director Jagan Shakti says, “The song is more like an anthem that plays out at different junctures in the film. It almost binds the story together. Each scientist working on Mission Mangal has their own idea for this ambitious venture, but faces roadblocks while executing them.”

Check out the song!

“In the film, the team members use their skills to crack problems, whether it is monetary, technological or otherwise. What matters to them is the ultimate goal, which is to successfully send the Mangalyaan into space to orbit Mars, and to do that in the first attempt despite constraints. Hence, we have titled this song Dil Mein Mars Hai, because, for these scientists, dil mein mars hai, quite literally,” the director added.

Speaking on working with each other, earlier Vidya Balan revealed that they are all secure actors and always appreciate each other’s work. Actress Sonakshi Sinha feels that the film promotes the spirit towards womanhood and we agree ! Finally there is a film which showcases its female leads as an important part. Mission Mangal is slated to release on August 15, 2019!