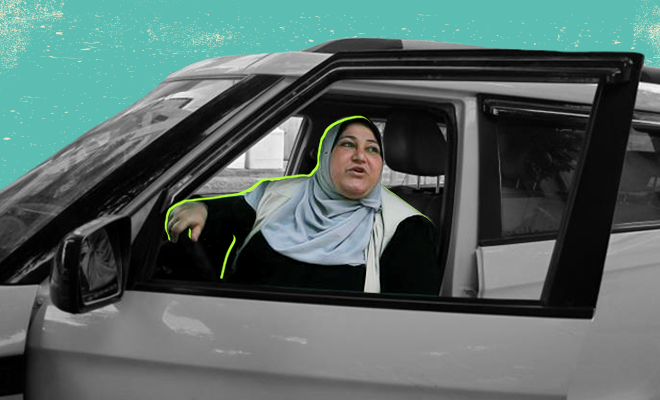 That it is tough living life as a woman, is a fact. But to imagine living life as a woman in the State of Palestine, where our gender as a female may be recognised, but our rights as a woman aren’t, is tougher than one can even imagine. Women in Gaza walk with a fear of being subjugated in every aspect of their lives. With laws that have been far from equal or benefitting to women, considering it hasn’t been easy to get a divorce from a man without his approval, or even report domestic violence as a legitimate offence in the eyes of the authorities, the female population continues to live a marginalized life in the Gaza city. And while most women make peace with such a prejudiced lifestyle, there are a few who are trying to change the situation, with one bold choice at a time. And driving a taxi here does just that.

Breaking past the super conservative and frowned upon culture of Palestine, where women are used to be looked at as props in the house and at the beck and call of the men, a Palestinian mother-of-five, Nayla Abu Jubbah has dared to become the first female taxi driver in the deeply conservative Gaza Strip.

Giving the traditionalist a run for their money and beginning to take control of her life in her own way, Nayla Abu Jubbah decided to launch a little movement of herself, when it came to claiming her power as an equal in the society. Up until now, even though the Palestinian territory offered equal rights to drive a vehicle to both men and women alike, the profession of running a taxi was still being reserved for the male population, only.

Also Read : Saudi Women Driving Is A Win For All Of Us!

Piercing through the male dominated industry of taxi drivers around the city was Nayal Abu Jubbah, took this opportunity after they were hit with the situation of pandemic, which forced lots of other sources of income for the people in city,  to shut down. Hence, came along this idea to become a taxi driver, for which she set up her mind and then arranged funds from the inheritance she received after her father passed away.

Today, her routine for the day starts with a warm cup of tea in the comfort of her house, followed by a quick march to her car, which she takes out to complete the pre-bookings that people have made with her. Not strolling down the street for random passengers, Nayla only accepts advanced bookings, and as she drives across the streets with passengers in her back seat, she feels a sense of relief and joy take over her. After all, in a state like Palestine, it is a great development to see women penetrate professional fields that had solely been occupied by men before.

It is good to see women in Gaza break the glass ceilings and how!