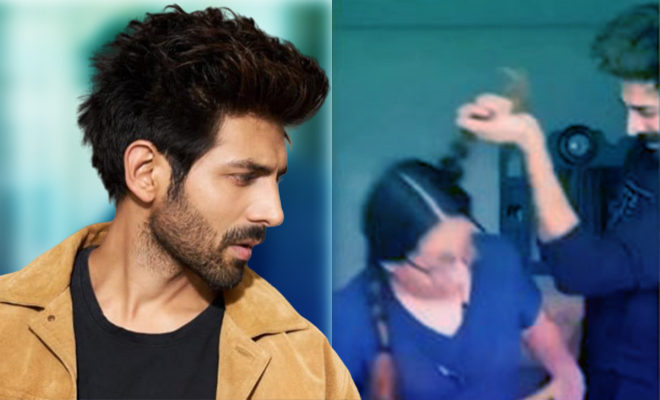 Kartik Aaryan’s New TikTok Video Shows Him Beating His Sister For Making Bad Rotis. Why Is He Tone-Deaf And When Did Domestic Violence And Misogyny Become Funny?

Even before the release of a very misogynistic Pati Patni Aur Woh, Kartik Aaryan was called out for his monologue on marital rape and thankfully it was taken off the film. However, the bits that were left out weren’t very equality-driven either. And now, he is being called out for making a TikTok video that promotes toxic masculinity and domestic violence.

In the video, he is seen punishing his sister for making bad rotis. To do so, he pulls her hair, spins her around and supposedly throws her out the window. “No compromise on food quality,” he captioned the video. It is shameful that he thinks this is even remotely funny and another woman is actually participating in this. I am not going to blatantly say that he would be doing such things irl because I don’t know him. However, what I know for sure is that with this video he trivialised the suffering of so many women who are domestically abused and normalised sexism.

I have begun to believe that thus is a new PR strategy for many. Put out misogynistic content or even hire a multiple #MeToo accused & then wait for the feminists to speak up & protest & thus amplify? Free ka publicity. Case in point Kabir Singh, Indian Idol & maybe this too? https://t.co/jEijOwfiwB

When such things happen, you can expect Sona Mohapatra, a fierce and feminist woman to not let it slide. She took to Twitter to call him out on promoting sexism through his TikTok video. She wrote: “I have begun to believe that thus is a new PR strategy for many. Put out misogynistic content or even hire a multiple #MeToo accused & then wait for the feminists to speak up & protest & thus amplify? Free ka publicity. Case in point Kabir Singh, Indian Idol & maybe this too?”

RJ Ira, a radio host at Radio Mirchi too called him out and wrote, “Acting in misogynistic films is one thing, bhai ye ab khud ese scripting aur directing bhi kar rahe hain?” To which Sona Mohapatra replied, “This guy has become a youth idol by consistently starring in misogynistic films &is happy 2extend it to his disgusting #lockdown video. DV in India is skyrocketing many women stuck 24/7 with their abusers.Call this out #India.He influences many more millions than Tangoli.(sic)”

Even Varun Dhawan had commented on his video asking what plants they’ve been growing at home. Needless to say, he insinuated that the video is so shit that it seems like they’ve been smoking pot. Of course, Kartik Aaryan found that funny too.

Several people though on Twitter also found this to be okay since they are brother-sister. They said it’s a joke and shouldn’t be taken seriously. Some even pointed out that Kartik Aaryan had made another TikTok video in which his sister slaps him in a prank. But here’s the thing. Siblings pull each other’s leg, play pranks on each other and throw hilarious verbal insults at each other. There’s nothing wrong with that. In the video that shows his sister slapping him, it’s a prank (not a cool one but still a prank!) In this video, firstly he is promoting that it’s the woman’s responsibility to cook and secondly, that it’s okay to beat women up. I am hoping he didn’t mean any of this but in a country where so many people look up to celebrities and that is struggling with domestic violence, this video shouldn’t have been made.

While some Bollywood celebrities have taken an initiative to curb domestic violence in India, it’s really a shame for Kartik Aaryan to make a video trivialising it.

I express my gratitude to the honorable Chief Minister @UddhavThackeray for this critical initiative! The cases of domestic violence have been rising rapidly across the country, and now is the time to stand up against it! #LockdownOnDomesticViolence #Dial100 @cmoMaharashtra pic.twitter.com/NPiw9UIxnx

ALSO READ: Woman Beaten Up By Her Husband When She Refused To Have Sex With Him. Lockdown or No Lockdown, This Has To Stop.

Ever since the lockdown, domestic violence cases in India has increased as women are stuck at home with their frustrated husbands who take out their anger on them. After this call out, Kartik Aaryan has deleted the video but I hope he doesn’t make sexist videos in the first place instead of having to do damage control!

ALSO READ: Domestic Abuse Cases Increase In India As Women Are Being Beaten Up By Their Frustrated Husbands In This Lockdown. Women Are Not Punching Bags, This Has To Stop.