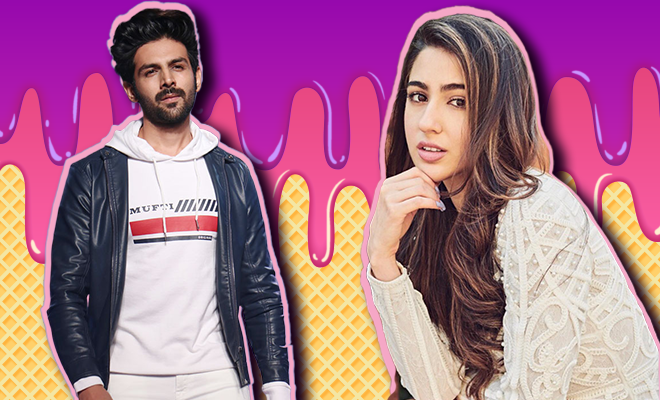 It may have started from Sara Ali Khan confessing about having a crush on Kartik Aaryan on a TV show, but their connection has come a long way since then. The couple (yes, we’re going to call them that!) got to spend a lot of time during the shoot of Love Aaj Kal 2 and they have bonded pretty well. We’ve been keeping a track of their romance since a while because – as our top fan on Facebook puts it – begaani shaadi mein Abdulla deewana. Initially, we saw them enjoying their dates, going on long drives and cozying up with each other! It then progressed to something a lot stronger than just sappy romantic exchanges.

After the shoot got over, both Sara and Kartik made efforts to make time for each other. Sara visited him in Lucknow and Kartik flew to Bangkok to wish Sara on her birthday. In fact, Sara even went along with him to visit his ailing father. Clearly, they bonded and they bonded well. It’s a connection that’s growing deeper with time. So recently, when I got to hear how Kartik really cared for Sara during the shoot, my heart just melted.

During the shoot of Love Aaj Kal 2, Kartik made sure everybody kept sweets away from Sara. This is because the gorgeous actress’s love for desserts goes beyond words and he didn’t want her to give in to the temptation. Kartik really appreciates Sara’s weight loss journey and during her weakest moments, he stood between her and desserts.

A source revealed, “Whenever someone got sweets on the sets, it would be kept hidden from Sara, as instructed by Kartik. Sara’s sweet saga had become a joke of sorts on the set. While shooting for Imtiaz Ali’s film, Sara and Kartik would explore local eateries. Sara being the ultimate sweet lover, would gorge on her favourite sweet dishes. However, it was Kartik who would keep a check on her binge. Kartik tries to keep her away from sweets as much as possible.” That’s care! Sorry bae, for getting mad at you for not letting me have that cheesecake. Also, don’t do that every single time, okay? At least not when I am PMSing.

ALSO READ: Kartik Aaryan Ditched A Work Commitment To Spend Time With Sara Ali Khan. And They Say They Are Just Friends!

On the work front, Kartik Aaryan and Sara Ali Khan are both doing well in their careers and have interesting projects lined up. Kartik has Pati Patni Aur Woh and Bhool Bhulaiya in the pipeline. Sara has Coolie No.1. Apart from these, the duo will be seen together in Love Aaj kal 2, to be released on February 14, 2020.

Netizens Were Impressed With Sara Ali Khan For Carrying Her Own Luggage. We Get That It’s Humble, But Impressive? Nope!