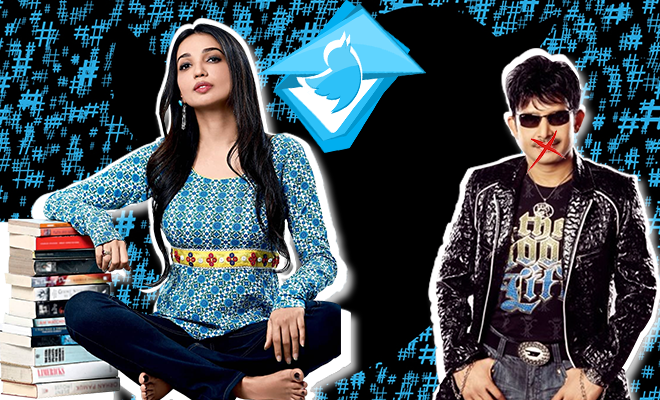 Kanika Dhillon Slams KRK For Passing Sexist Comments And We Are Glad Someone Shut Him Up!

The other day I was having a long heart-to-heart discussion with my best friend when we started talking about alpha women. How strongly opinionated, independent and successful women often end up intimidating men. And how the same kind of women, sometimes end up leaving these men frothing at the mouth, inciting them to unleash their misogynistic side. These men, who’s fragile masculinity is easily punctured,  often get an outlet on social media platforms and they won’t think twice before commenting about a woman and her looks. And this happened recently with Kamal Rashid Khan and the very talented Kanika Dhillon.

Also Read : Kabir Singh Is Not A Hero. He’s A Sexist, Abusive Alcoholic. It Scares Us That It’s Doing Well At The Box Office

I was always thinking that why does so beautiful girl #KanikaDhillon talks so much about sex in her films? Because I saw her beautiful pics only. But then I got chance to see her personally. And I came to know that she doesn’t have any other option to get out her frustration.

The once upon a time Bigg Boss contestant, who is universally detested by anyone who knows of his existence, has yet again given the people reason to cringe and roll their eyes. Especially screenwriter Kanika Dhillon, who was his latest target in a very poorly drafted tweet. In the tweet, KRK wrote, “I was always thinking that why does so beautiful girl #KanikaDhillon talks so much about sex in her films? Because I saw her beautiful pics only. But then I got chance to see her personally. And I came to know that she doesn’t have any other option to get out her frustration.”

Now I had to read the tweet a couple of more times before it made any sense and despite my very valiant effort, it still did not. What we did understand was that the guy is a misogynist pig taking a dig at Kanika for writing about strong subjects and with powerful women characters. And Kanika was in no mood to let it slide. She took to Twitter to address KRK and gave him back what he deserved, a reality check.

The writer ended with the words ‘Get well soon!’ and it’s the kind of thing you would say to someone who is sick, so this only makes sense. This guy should shut up or for his own best interest, check himself in to a mental institution, because the dude has some serious issues. His entire tweet, circled around the fact that he only ever saw Kanika as a beautiful woman. Clearly, he was taken aback to see her work, which is heavily focussed on women and their strengths instead of pandering to the stupid male gaze. It is obvious that the guy is unable to fully comprehend that women should have brains and a voice and his tweets are deeply reflective  on the inherent chauvinism rooted deeply within him and many others. The moment a woman starts doing well for herself, men such as him step in to pass lewd remarks and dismiss their work because as a woman if you talk about sex, it’s clearly shows that you’re frustrated.  But seems like the only frustration we see here is coming from KRK, who clearly has nothing better to do in his life than to sit behind his screen and not make sense.

Also Read : The Dalai Lama Apologised For The Deeply Sexist Joke. It Was Misunderstood. We Don’t Think So!

I've reported this tweet. Do same if any sanity is left guys ??

Mocking a woman is like drinking too much wine. It may be fun for a short time, but the hangover is hell.”

We’re glad Kanika was just as fierce with her tweet as she is with her scripts. The woman has recently written the screenplay for Kangana Ranaut’s next Judgementall Hai Kya, and has the public waiting for it to hit the screens.

Priyanka Chopra Smoking In Front of Mother Is So Unrelatable. Our Mother’s Would Sunao Us!