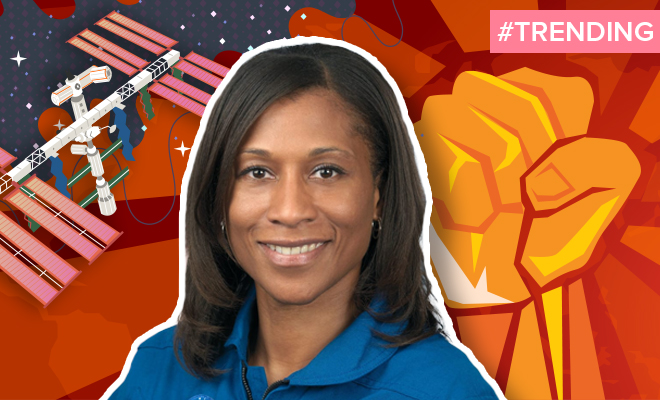 The first woman astronaut I ever remember hearing about, although in a proud yet tragic way, was Kalpana Chawla, the first Indian-origin woman to journey up to space from United States. The mission, that was successful but ended unfortunately, for upon reentry into the Earth’s atmosphere, it disintegrated into pieces, resulting in the death of all astronauts aboard. However, it still did leave a mark on so many of us, even giving young girls inspiration to follow their passion and take up the idea of going into space as proud astronauts. And today, years after the first woman went into space – Valentina Treshkova, from Soviet Union in 1963, we have another landmark moment for women, for NASA astronaut Jeanette Epps, is now going to be making history by becoming the first black woman to join the International space station crew.

Some may say it was long time coming, and we agree, it indeed was. But the moment is finally here, and we are thrilled to see Jeanette Epps joining fellow cosmonauts Sunita Williams and Josh Cassada as a crew member on the first operational flight of Boeing’s CST-100 Starliner spacecraft to the International Space Station (ISS), as has been announced by NASA.

The expedition that is scheduled to launch in 2021 is supposed to be 6 month long, making Jeanette the first Black woman to work in space for such an extended period of time. Associate administrator for human exploration and operations at NASA, Kathy Lueders said, “Jeanette Epps is the natural addition to NASA’s Boeing Starliner-1 mission. She fully complements the other members of the first Boeing full duration crewed mission.”

Also Read : This Sub-Inspector Helped A Woman Give Birth On A Railway Platform With A Doctor On Video Call. How Incredible Is This?

The young astronaut even took to twitter to share her feelings and respond to this new assignment as she wrote in the caption, “Thank you @JimBridenstine! I’m looking forward to the mission.” As are we! Epps earned a Bachelor’s degree in physics from LeMoyne College in 1992, and then in 1994 she completed her Master’s in science from the University of Maryland, College Park. She finally went on to get a doctorate degree from the same school in aerospace engineering, after which she worked as the CIA technical intelligence officer for quite a lot of years before she was picked for NASA’s 2009 astronaut class.

And what is surprising is also that right before Epps mission in 2021, astronaut Victor Glover is all set to launch his own mission into the space in October this year, which would make him the first male Black man to to go into space for an extended amount of time. While space missions have been going on for a while, we are surprised it took this long for change to include people of all colours to come around.

Also Read : A Woman On Twitter Asks If Men Have Female Role Models. Men Say Yes, And List Out The Sheroes They Look Up To