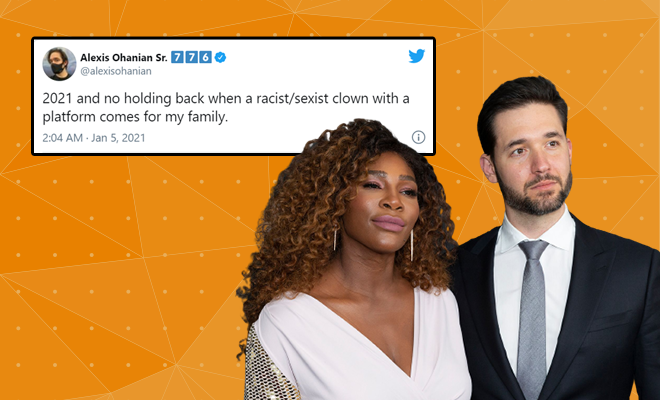 Serena Williams is a legend in the game of tennis. She’s a former world no. 1 and the fact that she has won 23 Grand Slams in her impressive career is a testament to it. And while she’s earned every laurel, she has also slipped every now and then, considering she’s only human. But turns out, Romanian billionaire Ion Tiriac has not been taking her occasional defeat in good spirit. He went on to body shame the Williams for her weight and even asked her to retire, causing Williams’ husband Alexis Ohanian to clap back at him.

In a nasty dig at Serena Williams, Ion Tiriac blamed her weight and body for her performance. Tiriac, who also owns the Madrid Open Tennis tournament, said, “At this age and the weight she is now, she does not move as easily as she did 15 years ago. Serena was a sensational player. If she had a little decency, she would retire. From all points of view.”

Not that it was any of his business to drop this unsound and far from decent advice, his offensive statements didn’t sit right with William’s husband and Reddit co-founder Alexis Ohanian, and we can imagine why. Not sitting put, Alexis Ohanian decided to give it back to Tiriac and in the most savage way possible too.

Safe to say no one gives a damn what Ion Țiriac thinks.

Had to Google it… turns out my 3 year old has more Grand Slam victories than this 🤡🤡 pic.twitter.com/Q2pgsNWFAj

He wrote, “Safe to say no one gives a damn what Ion Țiriac thinks”, and we’d agree. We couldn’t care less what a man with such low standards, who would equate a star’s performance with her ideal weight would even think. And Twitter agreed. Barring Tiriac himself, of course.

Ohanian didn’t just stop there either. Expressing his disregard for the statements made by Tiriac, he dropped another tweet saying, “Safe to say Serena will never play Madrid again,” and then one more which went like, “Had to Google it… turns out my 3-year-old has more Grand Slam victories than this clown.” A dig that was in reference to when Serena Williams won the 2017 Australian Open while she was pregnant with daughter Olympia.

This isn’t the first time Serena Williams has been subjected to such crass and crude comments about body shaming. There have been many pricks like Tiriac who reduce women like her to their shape. Though, Ohanian has taken a vow this year to not back down from defending his family, and we are glad to see how he is sticking up for his wife, putting people like the Romanian Billionaire Tiriac in their place. A grand ‘slam’, if you will!