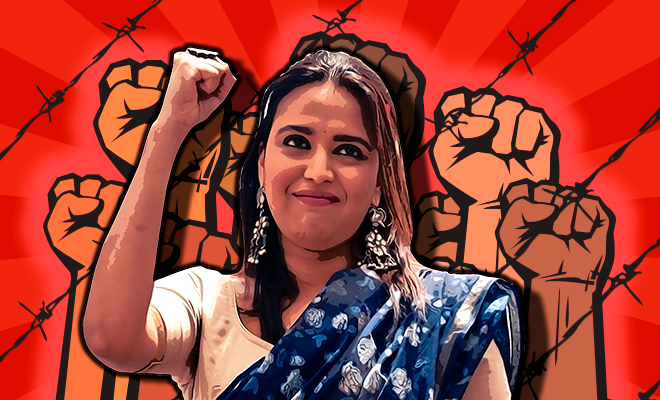 In The Midst Of The Political Turmoil, Swara Bhasker Is The Only Star Taking A Stand, And We Laud Her

If you thought things were about to get better this new decade, maybe think again. Our country has gone from exercising their right to protest the CAA to having innocent students get beaten up in a blink of an eye. Call me an optimistic but I genuinely thought that the incident at JMU and all the violent protests that followed would really change things. If not change, at least get people to understand that violence is never the answer to anything. But unfortunately, I couldn’t be more wrong and the incident that took place at JNU yesterday is proof of that.

Around 26 students and teachers were injured after a group of masked goons unleashed hell on the JNU campus. The angry mob that allegedly consisted of RSS- affiliated Akhil Bharatiya Vidyarthi Parishad (ABVP) vandalized hostel property and beat up students with sticks and iron rods. This nightmare continued for nearly two hours before the Delhi Police intervened and took control of the situation. Thousands of citizens from all over the capital flocked to JNU to show their support towards the students and teachers.

This is the kind of anarchy we are moving towards and it is truly horrifying. Some kind of action needs to be taken to ensure an incident like this does not happen in any university ever again. Beating up students and faculty members is not the solution to any problem. But a few people seem to forget that fact.

Also Read: Swara Bhaskar Calling A Kid A Ch***** Has The Internet All Irate. We Think It’s Being Blown Out Of Proportion.

Urgent appeal!!!! To all Delhiites PLS gather in large numbers outside the Main Gate of JNU campus on Baba Gangnath Marg.. to pressure the govt. & #DelhiPolice to stop the rampage by alleged ABVP masked goons on JNU campus. PLS PLS share to everyone in Delhi!🙏🏿🙏🏿 9pm on 5th. Jan pic.twitter.com/IXgvvazoSn

But amidst all this, we have to laud Swara Bhasker was the first celebrity to talk about this incident as it was happening. She might be the reason we know so many details of the situation. Of course, for her this was an extremely personal matter since her parents live on JNU campus. Amongst her series of tweets that began while the incident was ongoing, she posted a video of herself appealing to the citizens of Delhi to reach the campus as soon as possible to create pressure on the authorities to take immediate action. She posted pictures and videos of what was currently happening on the campus and even called out the Delhi Police for taking late action.

We have always loved Swara’s ability to call a spade a spade. She has never shied away from putting her views out there and says it like it is. That is exactly what we need all public figures and celebrities to do if we want to spread actual awareness. Swara knows how to use her voice, what stand to take and how to not waver from that stand.

She was also one of the celebrities who voiced out everything that was wrong with the CAA. Swara went as far as making a CAA guide video to explain the Act. It didn’t stop there though, she also walked the protests and made sure she expressed her concerns.

Of course, like all open-minded and opinionated people, she receives her fair share of backlash and Twitter controversies. Though I doubt that affects her, since she shuts them down with some of the most epic comebacks.

Swara, don’t ever stop doing what you are doing!

Update: Amidst all the unrest, a few big names in Indian fashion have also chosen to stand in solidarity with the CAA protesters and we are proud of them!