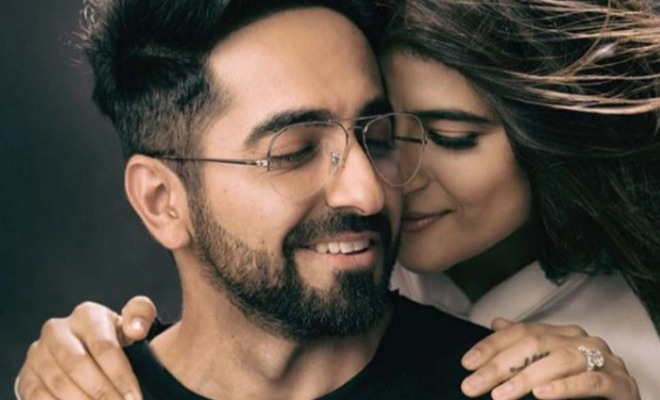 If Tahira Kashyap & Ayushmann Khurrana’s Marriage Survived THIS, Yours Can Too!

Ayushmann Khurrana and wife Tahira Kashyap are going strong and their bond can restore even a cynic’s faith in marriages! The actor was a pillar of strength for his wife, while she battled cancer. He was there for her through it all and she too didn’t crumble under all the physical and emotional impact a life-threatening disease can have on you. While the couple is giving us major marriage goals, a lot of effort has gone into building something so strong.

Tahira recently confessed in an interview with Spotboye, “I had a problem with him kissing on screen. I felt like a big, huge fat whale sitting at home. When you are pregnant your hormones also go up and down. Here this boy is looking at his youngest youth best and he is romancing women and what is this onscreen kiss!”

She revealed that back then, they were struggling to make their marriage work, “He didn’t have the time and patience to take me along and I didn’t have the patience to understand. There was this disconnect that we were not there for each other to take each other along in that journey. Somewhere he knew that she doesn’t mean mad. I also knew he wasn’t cheating. I had to evolve as a person to understand what art is.”

In fact, she was the one who had given up several times, but it was Ayushmann Khurrana who held on. “I had given up many times but he did not. He didn’t use to give up but he also didn’t make up… We both have really evolved as artists, as companions and we have seen a journey including cancer being a part of it. Where we are right now, it is at its strongest best,” she revealed.

Being in the same industry, Tahira was dealing with her own insecurities, even when it comes to her career. “He has reached a certain professional point of his career and I didn’t want to be a shame. I was very scared what people would think. We are our biggest enemies,” she said. On being asked about how Ayushmann reacted to her plans of directing, she said, “I didn’t even tell him for the longest time that I wanted to be a director.”

We’re glad the couple has overcome that and a lot more. Tahira is now all set to make her directorial debut, which will be produced by Tanuj Garg and Atul Kasbekar. The film will be shot in Mumbai. Talking about the film, she said, “It’s a slice-of-life film, which will have 5 girls.”