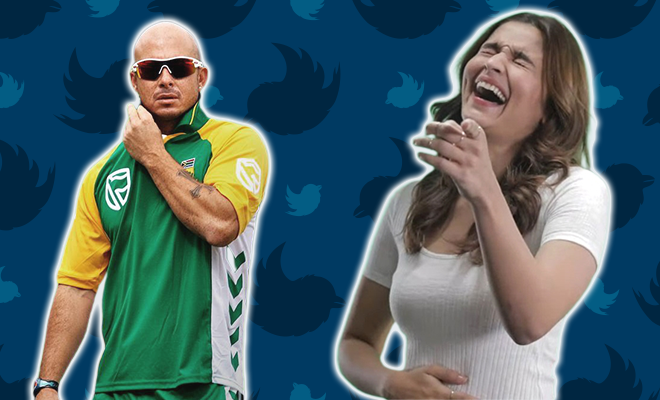 Herschelle Gibbs And Alia Bhatt Indulge In Cheeky Twitter Banter. It Will Drive Your Mid-Week Blues Away

Alia Bhatt has already established herself as one of the current reigning queens of Bollywood by giving back-to-back hits like Udta Punjab, Raazi and Gully Boy. And she’s winning over the internet too. She seems to have won herself another title- this time that of delivering epic comebacks. Now, despite never having thought that I’d have to take the names of Bollywood actress Alia Bhatt and the South African cricketer Herschelle Gibbs in one sentence, the two have made quite a few of us laugh this morning, with their Twitter banter.

Also Read : Alia Bhatt Becomes The Spokesperson For A Women Empowerment Initiative. Erm, We Are Not Sure About How To Feel About This

Morning ? birds are tweeting so I’ll do the same and say have a good one folks?

I have no idea who the lady is ?‍♂️

It started when Herschelle, wanting to wish a great day to all his followers, issued a nice and cozy ‘good morning’ tweet on his feed, that obviously was well received by his fans. In order to give his thanks for the overwhelming likes, he tweeted once again, this time using an Alia Bhatt gif while at it. Soon after, a follower asked Herschelle if he knew who Alia was and turns out he had no clue that the woman was an actress. He replied, “Didn’t know you were an actress @aliaa08 but nice gif.” And since then started a hilarious meme thread on twitter.

Didn’t know you were an actress @aliaa08 but nice gif?? https://t.co/XEUxALcR34

Alia Bhatt, stepping into the conversation, replied with an epic gif of herself, where she is seen using the umpiring a signal of 4. And we gotta love her for her quick wit and dealing with the episode in a jolly good manner. Far from taking offence at being relegated to the corner of being unknown, the young actress took it in her stride and played along with the legendary cricketer, only to have him reply to her with gif that stole all our hearts. And it was cheeky.

He replied saying, “I deal in 6s madam not fours” and honestly it made our day. Driving away our mid-week blues, this light and funny banter between Alia and Herschelle gave twitter a good laugh.  Especially with the kinds of memes that started surfacing almost immediately after.

I guess, she means to say, she doesn't know you too. ? @aliaa08 pic.twitter.com/o7whLID83f

Also Read : Alia Bhatt Dancing To Tip Tip Barsa Paani Is So Relatable. But Also, How Is She So Cute?

Taapsee Pannu Is All About Talking About Periods And We Support Her Wholeheartedly!