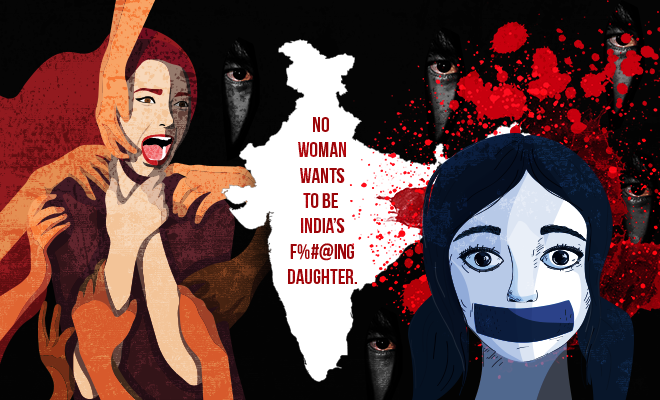 Dr. Priyanka Reddy, Played By All The Rules And Still Ended Up Getting Raped And Burnt To Death. When Will This Ever Stop?

Each time I am writing about rape and other crimes against women and at an alarmingly frequent level, I have to fight the urge to both throw up and throw a fit. But I have realised that none of it can help or change the situation. But also at this point, we don’t know what does in fact help. Because clearly, the protests, the social media posts by enraged feminists, the urge to educate yourselves and your children and the pleas for building a safer environment for women don’t help. In fact, do the sick minds of our society who participate in putting the blame on the victim, dissecting her character and her clothing have an answer to why a fully-clothed woman gets raped? Or why does a child get raped? Was the child dropping hints too? The victim-blaming methods are fucked up and has done nothing to keep women safe.

In 2012, we witnessed a gut-wrenching and gruesome rape crime case of Nirbhaya and the entire nation stood shook and observed not a moment of silence but that of shame. Shame because an innocent women was wronged, raped and destroyed she was nothing but a piece of meat in a slaughterhouse. People were agitated, horn-mad and scared at the same time. They felt charged up to bring her justice and to once and for all end crimes against women. Except none of this could stop monstrous men from raping more women. Weeks passed by and once again, the blood that had boiled, simmered down because our country wakes up only after the deed is done. Otherwise, most people chose to take a vow of silence or simply turn blind to the outraging reality.

Also Read : Demi Moore Was Raped And Sold To A Man At The Age Of 15. And Her Mom Knew It. This Shook Our Faith In Humanity

As a society, we failed because all that lack of action and effort in making the men understand that they are not entitled to any woman’s body has landed us plum in the face of another tragedy. Dr. Priyanka Reddy, a veterinarian from Hyderabad was raped, burnt and found dead two days ago. Another woman desecrated, just like that. And I say just like that, because Dr. Priyanka Reddy was well within the lines of our hypocritical samaaj and clearly, even that couldn’t save her.

This is an extremely painful news of Priyanka Reddy, shocked and disgusted on hearing this. The offenders must be punished! My deepest condolences to her family and friends 🙏 #RIPPriyankReddy #JusticeForPriyankaReddyُ

Every day one hears of attack on women outside workplace, on the way back home. Safety of Women needs to be addressed on priority as much as Swatch Bharat.. Mindsets of boys/ men needs to be changed. A campaign is needed for a safe India more than a clean India.

Beyond stringent punishments & better surveillance, we must ensure that boys grow up respecting women as equals. There must be gender empowerment & sex education at every level of learning, be it at home or at school. Every individual must take initiative to lead this change(2/2)

Outraged and deeply anguished by the murder of #Priyankareddy I am confident that @TelanganaDGP & the police will catch the animals who committed this heinous crime & deliver justice at the earliest. I’ll personally monitor the case too. Anyone in distress, please dial 100 🙏 🙏

Spotted by a group of four inhumane men, identified as Mohammad Areef (driver), Jollu Naveen (cleaner), Chennakeshavulu (cleaner), Jollu Shiva (driver), had noticed Priyanka parking her scooter at the toll plaza and taking a cab at about 5:50 pm. The sick minds then planned to rape her, by strategically puncturing one of the tyres of her scooter and later offering help to get it repaired. When she returned to collect her scooter at around 9:18 pm, she found it punctured, which is when the accused Areef approached her pretending to help her while Jollu Shiva pretended to take the scooter to a repair shop and then said all shops were closed. At this point, the scared Doctor had even made a call to her sister at 9:22 PM to update her about the situation and not minutes later, she was raped and smothered to death.

The accused then wrapped Dr. Priyanka Reddy’s body in a blanket and took it to Shadnagar, about 25 kms away from the scene to burn it. In a statement, the Police Commissioner VC Sajjanar said, “Our officer took them into a patrol vehicle and scanned the CCTV footage. The victim was also seen in the CCTV footage of the plaza. At around 3 pm, the family was brought back to book an official complaint. Till 5 am, we searched all puncture shops. The body was found at around 7 am.”

Also Read : Anushka Sharma Is Asking For Severe Punishment For The Men Who Raped A Child. We All Need To Stand Up For This!

Each time a woman gets raped, some people find some way or the other to put the blame on her. This time a police official made an infuriating statement that said how she could’ve been alive had she called the police instead of her sister. And that’s how yet again, our country and law-keepers absolved the accused and themselves of the responsibility of such a gruesome crime. What would have happened if she had called the police? They would have arrived after she was already raped. In a country like ours where rapes happen every day, every where – why aren’t police officials employed in all areas?

This spine-chilling incident left all of us angered and people took to social media to reinstate things that as a so-called civilised society, we should already have these concepts drilled in our brains. A social media influencer, Saloni Chopra took to Instagram to make a strong point and it immediately went viral because it collectively expressed our sentiments. “Nobody wants to be India’s fucking Daughter”, she wrote making a riveting statement that is now circling the social media.

Her caption read: “It was Jyoti Singh, not Nirbhaya. You don’t know if she was fearless. She wasn’t fucking volunteering. Before people come up with a brave name for Priyanka Reddy’s life lost amongst the other women we have lost in the last 7 years, let me remind you, that no one – none of us, want to be India’s daughters. You wouldn’t want your daughter to be India’s daughter.”
⠀⠀⠀⠀⠀⠀⠀⠀⠀
She further wrote, “Educate the girl” people scream, cos THAT is feminism, hai na? Beti Bachao Beti Padhao… “make them Engineers & Doctors if you want equality, that’s feminism” – that’s feminism? Well your education couldn’t protect her. That god damn degree didn’t come with safety. It came with the same fucking life that women have been living for decades & centuries in this country – with no respect or dignity. Men are raised with ZERO education towards a woman, her body, her period, her humanity, her identity.”

And then she made a point that needs to be shouted from the rooftops, and every single person needs to open their eyes to where the equilibrium between men and women gets thrown off. She wrote, “If Priyanka was a man, they would’ve robbed him & hit him and left. They wouldn’t have RAPED & BURNT HIM.” And as sad and disgusted it makes us feel, it is in fact the very truth.

Rape is not just about sex. It is about exerting power and reinforcing gender-inequality that has men in our country somehow feel like they have ownership of women. In our country, women are not seen as equals or individuals for that matter. A woman is reduced down to her boobs, her vagina, her buttocks. You are either looked at as a piece of meat or a wife, a mother, a daughter, but never as an individual with her own voice, feelings and opinions. Rapists not just ravage your body but your very existence as a human being. And mind you, it’s never about what she has worn because whether  the woman is wearing a mini skirt or a burkha, she will still be just a body to be mutilated.

No time curfews don’t help. Neither does calling the rapist “bhaiya”. Monsters can break into your home and rape you. Monsters don’t care if you call them your brother. If they had such an active conscience, they wouldn’t be committing a heinous crime like that. Our safety will remain in danger until our society and all these men realise just how fucked up their mindset is. But here’s the thing. We can’t just wait around in hopes that these men will realise what they do is evil. What we need to know and want these men to know is that it is unacceptable and won’t go unnoticed or unpunished.

Because as long as women are asked to sit inside homes and cover themselves up as opposed to them getting to live their life as they should, you are reducing us to just what the rapists think we are – a body to rape and destroy and burn alive. Nothing more and nothing less.

The outcome of Priyanka Reddy burned in Hyderabad yesterday. Girls are asked to stay home.

Girls need to stop classes, hobbies, whatever they may do after work just so that they don’t get raped.

If this is not screwed up, I dont know what is. pic.twitter.com/287y7T4yWZ

This is an extremely painful news, shocked & disgusted on this barbric and ghastly rape & murder. Its time we all hang our heads in shame. 😤😡 Thoughts and prayers with her freinds and family.
#RIPPriyankaReddy 🙏

Our city was one of the safest in the country “something I felt proud about”. It needs some serious attention. Pained and worried! #RIPPriyankaReddyُ pic.twitter.com/REt5V1NlYZ

Honestly, with the way our Government has been dealing with rapists, why would people be scared to death to commit such crimes? The criminals are put in jail for the longest time where they may not be living their best life but are getting free meals till they are hanged to death or finish their sentence. We are not paying taxes to feed these perpetrators. They need to be hanged without spending years in just trial.

With officials like CBI Director Ranjit Sinha having had passed statements like, “If you can’t prevent rape, you enjoy it”, the future doesn’t seem too bright for women, but it also doesn’t mean we sit quietly any longer. We need to make noise and not in form of muffled screams, but of power, of strength, of unity and of not backing the fuck down.

Yet again we demand the laws to be more powerful when it comes to punishing the criminals and we won’t stop until it happens. We want the men to be so shaken about the consequences that they can’t even think of doing that to a woman.

Also Read : This Documentary About Men Falsely Accused Of Rape Could Be Interesting But We Hope It Doesn’t Take Away From The Real Victim’s Stories