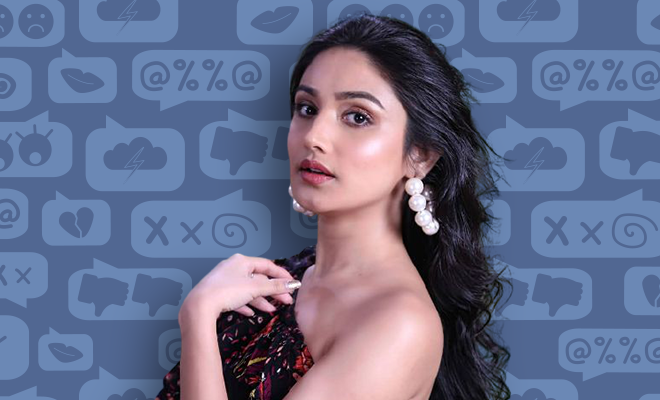 Donal Bisht Claps Back At Trolls For Shaming Her For Bikini Pictures. Her Choice Of Clothes Is No One’s Business!

Every celebrity’s Instagram posts are filled with a range of comments from their followers and non-followers alike which includes some love from their loyalists simply hyping them up and some unsolicited remarks and hateful comments from their, for the lack of a better word, haters. However, whenever a bikini makes an appearance on their posts, it is mostly slut-shaming, character assassination and judgements unapologetically passed on them in their comment section. And, this trolling is even brutal for television actresses since the trolls take serious offense if they do not put up their reel image of the sanskaari Indian girl offscreen too. *Rolls eyes* Actress Donal Bisht was recently put through this ordeal.

Recently, the television actress who was seen in the show Ek Deewaana Tha fell victim to online trolling and moral policing when she posted a picture in a bikini on social media. However, she slammed the regressive mindset of the trolls and hit back with an Instagram story to set them straight. She wrote, “Clothes can’t explain a woman’s character! Never judge a woman by her clothes! Judge her by her heart.” It’s sad how even in 2021, there are people who are so obsessed with a woman’s clothing that they don’t blink before slut-shaming her for an outfit of her choice. What’s the need of controlling and putting a woman down on the basis of what she wears? We don’t get it!

Talking further about the incident to Hindustan Times, she said, “My choice of clothes is no one’s business. And writing obscene comments on bikini pictures is nothing but a reflection of the pitiful mindset the trolls hold. Women should be allowed to wear what they want, and whatever they feel comfortable in, without being judged… And I’m not the first person on the planet who wore a bikini! Why make a big deal about it?”

It is not just the person being targeted unnecessarily for wearing revealing clothing that gets affected but her family too. Bisht opened up about how it bothers her mother to see hateful comments on her daughter’s pictures. She said, “My mother does get upset at times and even asks me to take down a particular picture after it gets ‘not-very-good’ comments. Given our profession, we know the reality, so we try to stay unbothered to an extent but there are people close to us, who aren’t part of the industry, who get really worried about these comments.”

Also Read: Ayesha Jhulka Turned Down A Role Because She Was Asked To Wear A Bikini. Bikini-Clad Women In Films Raised Eyebrows For A Long Time

Most often than not, celebrities keep mum about the trolls and move on with their lives mainly because trolls never learn. However, Donal Bisht decided to shut them because she feels that when it gets too far, they need to be shown their place. She said, “I try and focus on the brighter side of life always, scroll past any negative comments. It’s important to focus on feel-good content. But yes when things go overboard like it did this time I do feel the need of addressing it and put my point of view forward once and for all. Now if things still don’t work out I might consult the cyber crime cell. At the end of the day, if one hasn’t done anything wrong then it should not bother them anyway.” Well, she did the right thing by putting across the message to her haters loud and clear. More power to her!

And to the trolls who have this urge to spew hatred on women’s pictures and comment on their clothing every time they open their social media accounts, here’s another message—please get a life!

Also Read: Bikini Clad Women Always Outrage Society. Why Do We Feel The Need To Police What Women Wear?