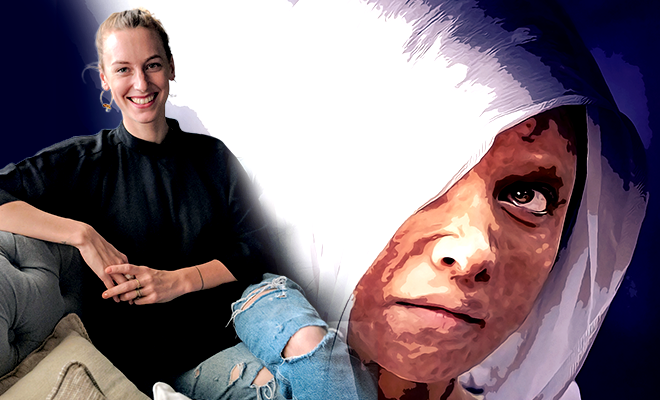 There’s so much that goes into making a movie. But often, the credit is given to the people on the screen – they walk away with the adulation, the fattest paycheck and a feeling of accomplishment – but there’s so much more to it. We all know that a movie isn’t just made by the actor, there are writers, directors, light people; it’s an exhaustive list. And we don’t nearly talk about about the makeup people. Sometimes, we do, but only when the makeup is awful. But when the makeup is good, great in fact, then we ignore it. Which was something Deepika Padukone experienced recently.

Deepika Padukone was in Delhi shooting for Chhapaak and a lot of it required her to be on the streets. Now, in  regular time, this would mean lots of security and keeping the crowds away because Deepika is a bonafide star. But turns out, she was practically unrecognisable. And this was mainly thanks to her makeup artist who did a fab job of turning Deepika into Malti, the character of acid attack survivor that she plays in the film.

The make-up expert Clover Wootton outdid herself in the movie with Deepika’s look, as she managed to create a look so close to reality, it hits hard to everyone watching. Just how it should be. She commented, “I have seen directors learn about the impact make-up can have in telling a story and creating a world on screen. Now with digital platforms, audiences are exposed to so much brilliant content that they are demanding better quality from Bollywood too. Indian content creators are responding to that demand very well,” and seems like artists like her are delivering on that demand, equally well.

She’s the one who worked on Anushka Sharma’s look in Pari, and on Ranbir Kapoor for Sanju.

Talking about how she felt like to shoot in Delhi, in a completely different and unrecognisable look, Deepika said, “It was so liberating, it was so liberating because people did not recognise me. We were shooting in Delhi and of course later the news spread that this film is being shot and I am there. Anywhere we were shooting, I could go without being recognised. People would look at me, they were curious about my face but did not recognise me,. Some people were like, is it her, is it not her. It was liberating because it has been a while since I have been able to just go out like that.”

Actors, have their entire life spinning around their appearances, so to imagine the kind of satisfaction and relief for them to have, to not be bothered about their appearances and focus on what they should in the first place – acting and how closer it makes them feel to the character. And to a large extent here, Deepika has Clover to thank.

Deepika even admitted to how she was nervous yet excited to take on this role for she had never played a real life character before. The movie is set to release on 10th January next year.

Also Read : Deepika Padukone Said Shooting For Chhapaak Took A Toll On Her Mental Health. We Applaud Her Commitment