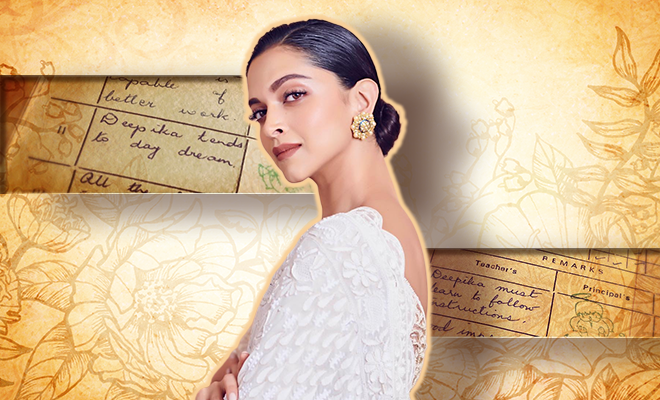 Deepika Padukone Shares Pictures Of Her Teacher’s Comments On Her School Report Card. And It’s Nothing You Would’ve Expected

If I were to go back to looking at my report cards from back in the day when I was in school, all the teacher’s remarks would probably hold as true as a prophecy, for even at that age my teachers could tell how much of a nerd I was. So naturally, when I ended up becoming a writer, the question ‘Who would’ve thought’ was out of question, because the answer to that was – everyone. But that wasn’t quite the case with the actress Deepika Padukone as we have come to find out from her recent Instagram post.

Also Read : Deepika Padukone’s Instagram Is So Real, We Are Guessing No Social Media Team Is Handling It

Deepika Padukone published 3 posts sharing some of the remarks that her then teachers made on her report card and we got a peek into how she would have been back in her school days. We got to know that she was a talkative and imaginative little kid, who dreamed of reaching the stars, and ended up doing just that.

The first post shows a teacher sharing how, “Deepika is very talkative in class”,  which the 33-year-old actress caption with just an ‘Oh!’. This was perhaps our reaction as well as the actress now seems rather reticent and definitely not talkative. The second has, “Deepika must learn to follow instructions,” while the third one shows a teacher having written, “Deepika tends to day-dream.” Now looking at these, nobody would’ve imagined that the same day-dreaming rebellious kid would turn out to become the queen of Bollywood, but here she is all these years later, basking in the success she has rightfully earned.

From not being a teacher’s favourite, to now becoming the nation’s favourite instead, Deepika has instilled our Tuesdays with a sense of nostalgia and hope. Ranveer Singh, Deepika’s husband, also took to his Instagram to comment on wifey’s throwback photos as he wrote, “Yes, teacher. I agree” in one post and, “Head in the clouds” in another.

We wonder what her teachers would now have to say about the Padmaavat actress, because it can’t be ‘I told you so’!

Also Read : Deepika Padukone Nails Every Detail Of Her Dior Look For Paris Fashion Week And There Are So MANY