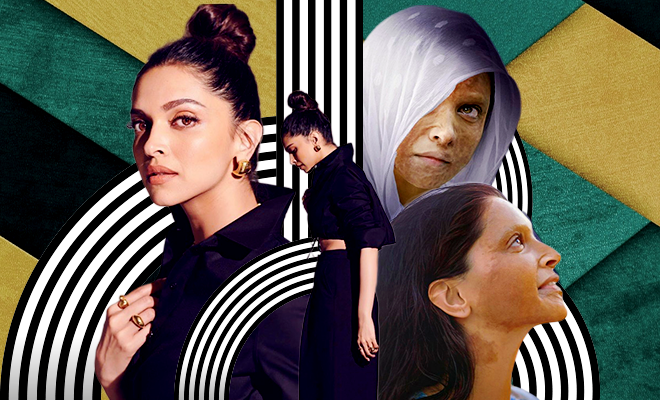 Deepika Padukone Said Shooting For Chhapaak Took A Toll On Her Mental Health. We Applaud Her Commitment

Human beings are supposed to be empathetic, the levels may vary but it’s certainly there. Although there is a major chunk of our population who hurt other people and feel nothing, I’d like to believe empaths still outnumber those weird beings. Which is probably why, when Chhapaak’s trailer launched I was really emotional. Because I was to write about it, I ended up doing a lot of research of acid attacks in India and doing just that – reading about it – took a toll on me. So I can’t even imagine the emotional turmoil that the victim goes through and with Deepika Padukone sinking her teeth into the role of an acid attack survivor in Chhapaak, it couldn’t have been easy. Recently, the actress opened up about her depression relapse during the shoot of Chhapaak.

In an interview with Rajeev Masand, Deepika opened up, “I needed to have my counsellor on the sets of the movie with me. It came out of my nowhere and I was also caught off-guard. I started feeling it coming on and I thought maybe I am just tired or it is the long hours. But then it got really bad and I started feeling claustrophobic. It was very tough for me emotionally. To think about those days and put myself emotionally through that.”

In Chhapaak, Deepika essays the role of acid-attack survivor Laxmi Agarwal, who has also been instrumental in passing of new laws that restricts the sale of acid today. Deepika had to undergo long prosthetic sessions for 42 days, which she says was the toughest part of the film. “Initially it was very technical and there were no emotions involved. As soon as we decided we are going to do this movie, we had to immediately start on prosthetics because I was getting married and would be unavailable. We had to go through a bunch of look tests. I was going through the emotions but it became a reality when we did the final look test. That’s the day the face came on and I told Meghna that I feel just like myself. She said that is the movie,” she expressed.

Deepika explained how she connected emotionally with her character over a period of time. “Since prep started before the wedding, it allowed me to live me with all that work we had done before. Even through the wedding, it was at the back of my head; I was gearing towards it. The look test stayed with me. I chose to do it that way as I wanted to live with it. It was the emotional prep, the physical prep is easy,” she added.

It’s amazing how much effort Deepika puts in her roles and connects with her character emotionally so she can do justice to it. And in a movie like Chhapaak, it was absolutely required because pulling off something like this is quite mentally taxing.

Deepika Padukone had suffered from depression and has been vocal about it since 2015. She has been an outspoken advocate about mental health and encouraging people to feel uninhibited to talk about it through her NGO, Live, Love, Laugh Foundation. I am already rooting for this movie, much like the whole country at this point. The movie is set to hit the screens on 10th January, 2020.

ALSO READ: Rangoli Chandel’s Reaction To Deepika Padukone’s Chhapaak’s Trailer Is Touching. This Is A Story That Needs To Be Told.