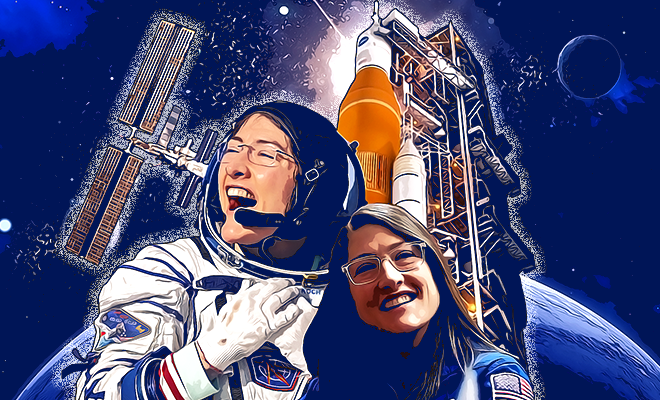 Whoever said that women were born to only procreate and then assume the household responsibilities, must and should be introduced to Christina Koch, the woman astronaut who recently returned to Earth after a successful 328 day trip in the space, and honestly, we can’t keep calm with the kind of heights (literal and metaphorical) that the women of today are scaling.

The NASA astronaut who came back on 6th February, after conducting what was the longest spaceflight ever by a woman in space has made some groundbreaking records and not just for NASA but also for all of women, giving us a reason to celebrate and relish the kind of accomplishments that our tribe is capable of achieving. I mean, we always knew it, but the world knows now.

Landing in Kazakhstan with two more astronauts from European and Russian space agencies who were with her on this space voyage, this space mission was Christina Koch’s first ever space mission, and clearly a grand one at that. Talking about her feelings when she touched base back on Earth, Koch said, “I am so overwhelmed and happy right now,” and we can only imagine. Christina took to her twitter account to share what she’d be missing from her 328 space stay and wrote, “What will I miss? The exquisite beauty of both the planet Earth and this marvel that its amazing people created.”

LIVE NOW: Landing coverage continues as we say #CongratsChristina to astronaut Christina Koch for a record-breaking mission in space lasting 328 days. Tune in to see crew members being welcomed home after landing back on Earth at 4:12am ET: https://t.co/IazhyehXM0

What will I miss? The exquisite beauty of both the planet Earth and this marvel that its amazing people created. pic.twitter.com/VWIFXuJMTp

Also Read : Kirthiga Reddy Joins The Board At WeWork. She’s Shattering Glass Ceilings And Paving A Way For Women Everywhere. You Go Girl!

Talking about Christina Koch and her previous achievements in this space (pun intended), she was also one of the first women along with Jessica Meir to take part in the all-women spacewalk conducted back in 2019 in October. Women have been taking to the skies, re-writing history and even surpassing and surprising their male counterparts with the kind of valour, talent and hard-work  they’ve been showing to prove to themselves to the world. Forget about being a step behind, we are claiming the earth and the sky!

And not just us, the fact that she was able to conduct this 11-month long space mission, with 6 successful spacewalks and insights that would help the world get more valuable information about the world beyond, means that her contribution is immense and mankind thanks her for it. Contributing immensely to the scientific studies, repair projects and more, videos, pictures and news is trending on the internet, sharing Koch’s out of the world experience!

We absolutely love this woman for whom even the sky is not the limit.

Also Read : Shooters Apurvi Chandela And Anjum Moudgil Secure Medals. The Women Are Getting Us The Glory