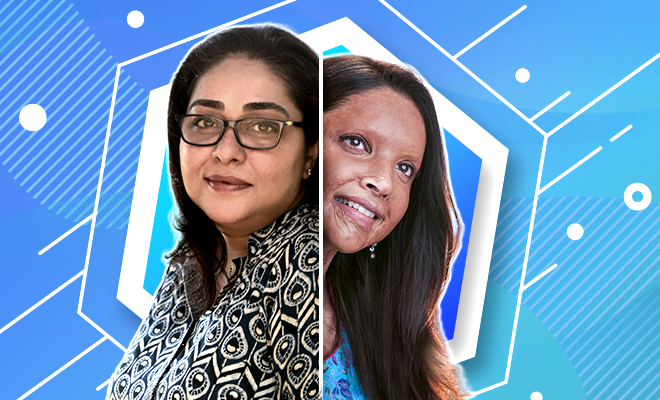 Chhappaak’s Director Says Deepika Padukone Will Be a Revelation In The Movie. We Hope So Too

I am a huge Shahrukh Khan fan, I have been since I saw KKHH as a kid. Another one of my fav movies is Om Shaanti Om.  I remember loving the storyline and of course him in it (With those million-dollar abs!). But just like everyone else I also loved something else in that movie, Deepika Padukone. She was graceful, gorgeous and tall. Little did I know, she would one day rule over Bollywood!

After starring in nearly 30 movies, spanning a little over a decade she is back with her next much-awaited project Meghna Gulzar’s Chhappaak. The movie is based on the life of Laxmi who is an acid attack survivor. Deepika’s character Malti will be based on Laxmi and the movie will follow all the events that followed the gruesome attack. Meghna says she came across the “extremely rampant” crisis of acid attacks in 2015 and wanted to portray her take on the horrible subject.

This is why I love movies, they are the ultimate medium to convey a social message that eventually initiates change. Of course, the pain and struggles the victim goes through cannot be fathomed by any of us except maybe for the person who is portraying a character based on the same events on camera. In this case, Deepika. I mean, it can’t be easy immersing yourself in the life of someone that has been through something as heinous as an acid attack. But Deepika did it and according to Meghna, she is a “revelation” in this movie.

Talking about Deepika’s performance in Chhappaak, Meghna said in an interview, “Deepika is going to be a revelation in Chhapaak. It is a completely different side of Deepika which people will see. When I say that I don’t mean just the look or prosthetics, it’s also about going into the second level of the character – the body language, the gestures and the general energy.” It isn’t the kind of movie we are used to seeing Deepika in and that is exactly why I can’t wait to watch this movie!

Also Read: Deepika Padukone To Play Draupadi In Mahabharata And Re-Create It From A Woman’s Perspective.

In the same interview, Meghna also said “It’s amazing how quickly she picked up the stuff. Even her smile that she has throughout the film, it’s not the Deepika Padukone smile. It’s Malti’s smile. Somewhere we found a middle path between Deepika’s and Laxmi’s smile. It’s been fulfilling to have had her as a part of this film.”

Considering that Meghna’s last directorial venture was Raazi, there is absolutely no doubt that Chhapaak will be a fantastic movie. After all, she has always made it a point to pick up the most unconventional stories and cast mainstream A-listers to play the protagonists. She says, “I want to tell unconventional stories and I wish the story goes as far and wide as possible. I try and get people who are the mainstream faces and voices to help the film travel. I have been fortunate that those people have agreed to come on board and taken the story wider than it could have gone.”

This actually makes a lot of sense. Think about it, casting Deepika as Malti allows the story to reach far more people since she is a beloved actor. Meghna also says that specifically focused on Laxmi’s story since it was the most talked-about acid attack case.

She said, “It was a landmark case in the medical community, in the legal community and it had a very unusual social and legal implication because there was a love story.” Now, do you see why I am so excited to watch the movie? Despite being a very niche, it has all the elements of a great movie.

Chhappaak, backed by Fox Studios marks Deepika’s debut as a producer and also stars Vikrant Massey. It is all set to hit the theatres on 10th January. Make sure you book your tickets!

Deepika Padukone And Ranveer Singh’s Instagram PDA Has Us Going Aww. They Are Such #CoupleGoals