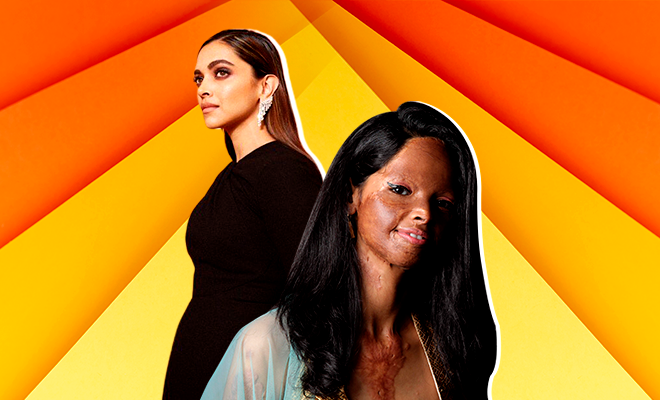 Chhapaak Is Not About Deepika Padukone, It’s About Laxmi Agarwal. It’s About Acid Attacks, Not Politics.

There is a saying that goes “an eye for an eye will make the world blind.” Simply translating into the fact that the feeling of vengeance and revenge will put you in a cycle of  mutual self-destruction. And it’s rather true.  And considering we’ve shed most part of our humanity lately, what with defying any  sense of civil or general courtesy, we aren’t all that surprised. People will stoop down to any low, employ any means to get square with someone, as what we’ve seen for ourselves happening with Deepika Padukone this time around.

Ever since the Chhapaak actress showed up in support of the JNU protestors, a series of events have come into motion like a domino effect. Dividing the people of the nation on whether this was brave of her or extremely smart or anti-nationalist, there are a lot of mixed opinions out there. And considering we can’t always please everyone, there is also a lot of flak that Deepika and her  film Chhapaak is receiving because of her decision to turn up at JNU. Being branded an anti-nationalist by some and an insensitive PR monger by others, people are coming at her left right and center. And while all of this was still to an extent anticipated, what wasn’t was the fact that people would also start spreading fake rumours about her film in order to get back at her.

Also Read : Deepika Padukone Turned Up At The JNU Protests. Here’s Why We Think It Wasn’t To Garner Publicity For Chhapaak

The whole of yesterday, hashtags asking people to not watch the movie, that they’re cancelling their tickets (all the same one, apparently) and a few rumours also made the round. Sharing posts with false information, of how the real attackers name and religion has been changed in the film, people have literally fallen beneath themselves to manipulate public opinion of Deepika with false information. Because the narrative is not about Deepika anymore as much as it is about Lakshmi and getting her story out there.

RT if you will Boycott Movies of @deepikapadukone for her Support to #TukdeTukdeGang and Afzal Gang pic.twitter.com/LN5rpwjDmT

Not realising how it would impact the greater issue at hand here, that of honouring Lakshmi’s struggle and putting them right in the face of the struggle of a victim and their family. At a time when people need to be talking about handling rejection without feeling the need to destroy a woman and her future, we have fabricated news about this movie.

Calling Deepika names, equating her stance to stand with the JNU protesters as a sign of her being anti-Hindu, embellished with this fake news of her acting in a film that changed the religion of the culprit from Muslim to Hindu, this is all but an orchestrated attempt to bring her down for having the guts to take a stand. The collateral damage, unfortunately, is Chhapaak, a story that if  boycotted would be a great injustice to the acid attack survivors all over the country.

. This is not about Deepika and it should not be anymore. Lakshmi and her story of being a victim, a survivor and the face of true and harsh reality cannot be put on the sidelines. People need to see this and they need to see it now.

In fact, there is also word that Lakshmi Aggarwal’s lawyer on the case, Aparna Bhat is planning to take legal action against the makers of the film Chhapaak, for not giving her due or any credit in the movie for participating in earning Lakshmi her justice. And perhaps this is another reason why the focus needs to shift back to the movie and those central to it, because this isn’t a dialogue that can be ignored for too long. This is the need of the hour.

Also Read : Rangoli Chandel Slams Deepika Padukone For Showing Up At The JNU Protests By Calling It A Promotional Gig. Come On Rangoli!