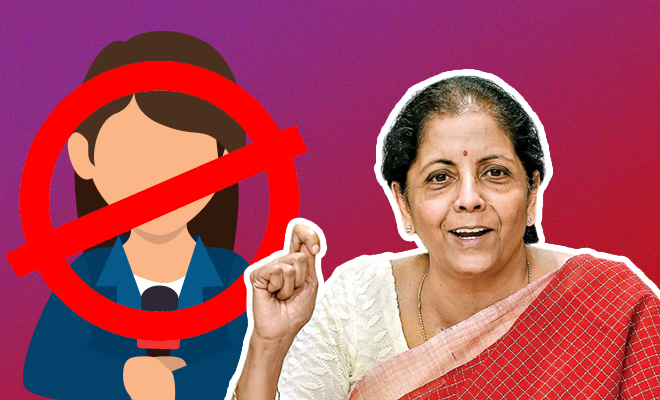 Here’s the thing, all professions in the world are packed with misogyny and sexism. Although this gender-bias shows up in various forms, some more out there than the others, you can’t deny its presence. The latest example of subtle sexism showed up during the post-Budget press conference. It involved a female journalist. Thankfully, unlike most politicians, Nirmala Sitharaman quickly and tactfully came to her rescue and handled the situation and gave the audience a good laugh. This is precisely why we need more women representation in our government.

You see after presenting the 2021 Union Budget in the Parliament, Finance Minister Nirmala Sitharaman MoS Anurag Thakur and other Finance Ministry officials sat down for a press conference. For over an hour, the FM answered multiple questions, thrown at her from various journalists, regarding the budget.

In the latter half of the presser, after nearly an hour, a female journalist stood up and addressed FM Nirmala Sitharaman. She said that she had two questions to ask. Right then the Press Information Bureau (PIB) chief KS Dhatwalia said, “No, only one… others are there.”

Also Read: Finance Minister Announces That Women Can Now Work In All Sectors And Also Do Night Shifts. There Are Conditions For Safety

The female journalist was just about put forth her argument as to why she should be granted two questions when Nirmala Sithraman jumped in at her defence. The FM quickly told the PIB chief that no one stopped the male journalists from asking multiple questions, so why are they stopping her?

Nirmala Sitharaman said, “Why did you say that only to her? You didn’t stop the guys.”

Her quick defence not only shut down this moment of subtle misogyny but also gave the audience a good laugh amid a very serious presser. Even the journalist in question thanked her for coming to her defence.

I know that a lot of you must look at this incident think it’s extremely negligible. But that’s not true, it might be a tiny thing but it was enough for us to see the kind of gender-bias that exists. After watching the clip, I couldn’t help but think that we desperately need more women politicians in the game. We also need more political leaders to learn how to stand up for women the way Nirmala Sitharaman did, even for the smallest of matters.

This Guy Called Our Finance Minister Nirmala Sitharaman “Sweetie”. She Didn’t Even Dignify That Bit With A Response