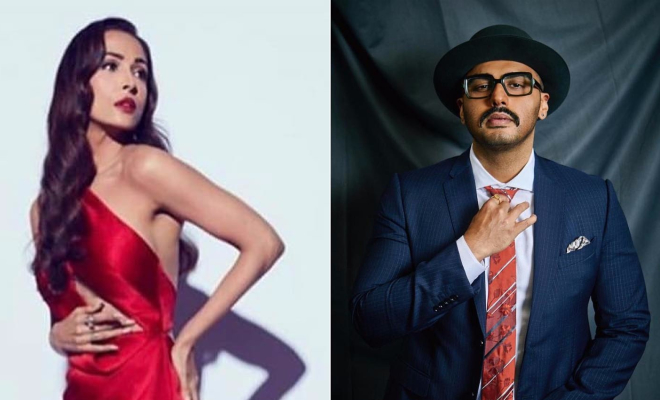 After keeping their relationship under wraps for months, lovebirds Arjun Kapoor and Malaika Arora finally came out open about them being together. From secret dinner dates to their recent Maldives holiday, the duo have been painting the town red lately. Arjun Kapoor and Malaika Arora are officially becoming the ultimate #coulplegoals and just like every other couple who love spending time together, they’re living it up and we can’t get over the two! The most talked couple in the tinseltown are inseparable and too cute, which is making us want a relationship now.

Also read: Malaika Arora’s Son’s Reaction To Her Relationship With Arjun Kapoor Is So Mature. We Could All Learn From The 16-Year-Old!

While they are relatively low key when spotted together in India, they do indulge in PDA on their vacations. And they certainly do indulge in some lovin’ over social media. Generally, Arjun Kapoor always comment on his close buddies posts on Instagram and he did something similar this time again. On Saturday, Malaika Arora shared three pictures of her from her dream-like vacation in Maldives and beau Arjun Kapoor couldn’t resist commenting on the picture. Malaika Arora is looking all stunning in the picture and is seen wearing a white bodycon dress with the sea in the background. The fit-as-a-fiddle diva wrote, “Silhouette.” To which, Arjun Kapoor sarcastically replied in the comment section, “Love the insightful writing…”

Arjun Kapoor’s sarcastic replies are totally entertaining and we love it! Malaika Arora and Arjun Kapoor have openly started to talk about their relationship in interviews and are also now sharing posts of each other on Instagram.  Which in today’s world is everything. It was Arjun Kapoor’s 34th birthday when Malaika made her relationship with him, official. The stunning diva shared a romantic photograph with the actor on Instagram to wish him on his 34th birthday. “Happy birthday my crazy, insanely funny and amazing Arjun Kapoor… Love and happiness always,” she had captioned the image in which the two held hands and snuggled.

Malaika Arora and Arjun Kapoor’s wedding rumours have also been making the rounds lately to which the actor said,“I’m not getting married. I understand why there are speculations. Because in my own house people would ask Tu shaadi kab kar raha hai?  (When are you getting married?) It’s a very organic Indian question. If you’re with someone for even three days, the marriage question pops up. Thirty-three for most people in India is a great age to get married, but not for me. I still have time.”

Also read: Malaika Arora Says Arjun Kapoor Makes Her Laugh. This Is What A Healthy Relationship Looks Like!

On the professional front Arjun Kapoor will next be seen in Panipat, a historical drama directed by Ashutosh Gowariker. The film also stars Kriti Sanon and Sanjay Dutt in key roles.