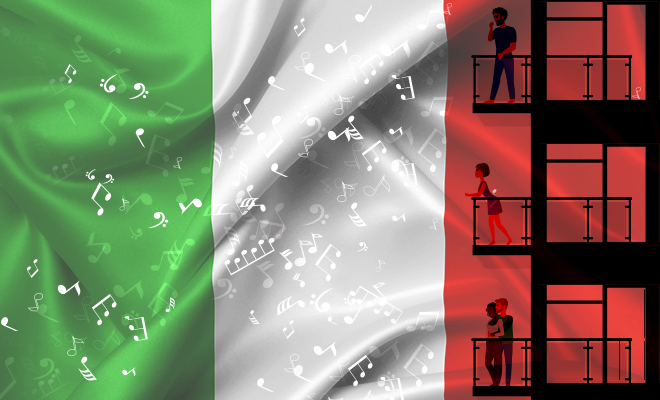 Amidst The Dark News Of Coronavirus, Italian Residents Sing Songs From Their Windows And Balconies To Cheer Themselves Up. It’s Heartening!

They say there is light at the end of the tunnel. Something Italians  are truly believing at this moment, as they find themselves stuck both – in their homes and in the larger context, life as Coronavirus continues to spread untethered. And while it may not be a light per se, it’s nice to see that they are being positive in these tough times. Italians have yet again managed to make most of this ominous situation by standing at their windows and singing in unison, and it’s the best thing we have read today.

Caught in an infectious cross fire, as Italy becomes the ground zero in Europe, the entire country has been put in quarantine with the total number of fatalities reported at present going up to an alarming number of 1,809, with about 20,603 total cases reported. And even though the times at present for every country across the world seem bleak and life threatening, Italy has some how landed itself plum in the middle of this pandemic.

And while it has literally become impossible to escape the repercussions of this widely spreading virus, even in conversation, the Italians have managed to do something that no one else could – give us hope and make us feel better about it all. Standing up in their windows, it has recently been reported that the isolated citizens found a way to come together even in this atmosphere of grim to sing together songs of hope and togetherness.

In what seems like an attempt to salvage the situation and support each other through this unforeseen crisis, the people decided to sing songs of merriment to make themselves and others feel better about the situation. Videos that have now gone viral show how in one part of Italy, reportedly the Tuscan city of Siena, people were found singing ‘Canto della Verbena’, a song prompting the long life of Siena, while in other parts, people and celebrities are deciding to host online performances in these troubled times, to keep the city entertained and assured that better days will follow.

Sicily has figured out this whole self-isolation thing.#COVID19 #CoronavirusPandemic pic.twitter.com/93whPVtQcR

Videos of people from the city of Turin have also surfaced up, showing them do the Macarena hook step standing in their balconies and that put a smile on our face. From singing songs that go with lyrics like, ‘Tell me what it is which makes us feel like we’re together, even when we’re apart,” to putting up sign boards in front of the houses that say, “andra tutto bene”, which translates into ‘everything will be OK’, seems like we can learn a thing more from them about how to compose ourselves during these times of a crisis.

The residents have also started to take to social media to share their thoughts about the crisis. Even Italian singer, Andrea Sannino took to his Instagram to post a compilation video of people singing through their windows, finding a way to console and uplift each other even in these dark times. And it is such thoughtfulness and effort to see the silver lining on this extremely dark cloud, that has us raising a toast to their spirits and reminding ourselves, that as long as we’re together (at a safe distance and sanitized no less), there is a big chance we will get through anything in life. Or so we  dearly hope!

Also Read : As Coronavirus Spreads, Indian Women Come Up With Effective Remedies Like Prayers. This Needs To Stop