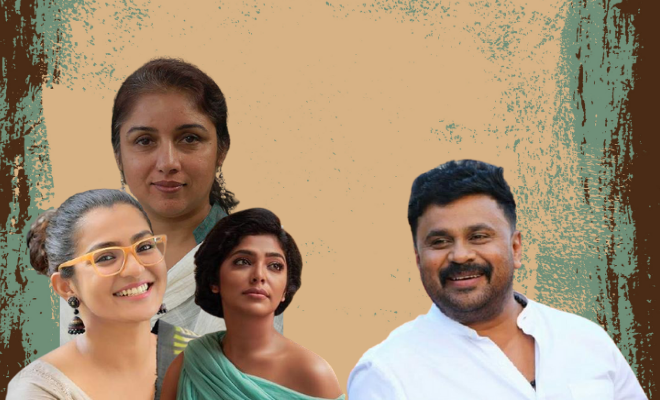 Actor Dileep Has Been Accused Of Sexually Assaulting An Actress. These Actresses Have Shown Support But Some Have Retracted Statements

In movies, especially those involving some intense court room drama, it is always shown how catching up to the criminal or the perpetrator isn’t where the story ends, but where it starts. It is in fact after you catch hold of your prime suspect, that the process of holding them guilty of their crime in a court of law begins, and just like in the movies, it is never all that simple. There is compromised trust, tampered evidence, missed facts and more often than not – altered testimonies of the prime witnesses that can instantly make or break a case. A curve ball that was recently thrown in the on-going investigation of an actress assault case of 2017 against Malayalam actor, Dileep.

For those who are unaware of the horrific incident that sent chills down the spine people who heard about it, it involved a famous actress from Malayalam film industry who was abducted and sexually assaulted in a moving vehicle on 17th February, 2017. Actor Dileep was accused for being the mastermind behind this case, with 10 other people accused with him for the same. It was also shared by the survivor, that she wasn’t just molested in the vehicle, but was also being filmed to later be blackmailed by it.

During the course of investigation, almost 136 witnesses were listed to be questioned. 4 from the list were actors from the industry itself, and soon after the case was filed, the actors had come up to admit that would further incriminate Dileep for his crimes. But, it seems like Dileep might be able to swing some votes in his favour. Despite the obvious ghastliness of the crime,  Edavela Babu and Bindu Panniker took back their own words in court, and now having followed suit in changing testimonies in court are Mr Siddique and actress Bhamaa.

The two had earlier, reportedly spoken about a fight that broke out between actor Dileep and the survivor during a practice rehearsal for an AMMA (Association of Malayalam Movie Artists) show, just prior to the crime. However during their inquiry in the court, the two refrained from mentioning this point, according to sources.

“It is certain, in any case, that ignorance, allied with power, is the most ferocious enemy justice can have. Neither love nor terror makes one blind: indifference makes one blind.” – James Baldwin #Avalkoppam #IStandByTheSurvivor #WCC @WCC_Cinema https://t.co/Ud2W4TPnd1

Also Read : This Politician Said Something Spectacularly Stupid About Sexual Assault But Refuses To Apologise. We’re Not Surprised

A survivor has been put through hoops of fire and constant trauma for over three years. We have seen her stand tall and fight for justice. It has a been plain torture. I’m in shock at how witnesses are turning hostile. #Avalkoppam #IStandByTheSurvivor pic.twitter.com/P5Q4I62kZr

Especially one whom you’d consider a friend. Heartbreaking. Nevertheless, I want to believe her fight for justice will triumph. Standing by her! #Avalkoppam #IStandByTheSurvivor pic.twitter.com/A8YFPJuyZY

Several stars from the south industry, including big names like  Revathy, Rima Kallingal, Parvathy, Remya among many others have decided to stand up with the victim, in her support, condemning all the faint hearted people who have chosen to change their statements against an actor who is being tried for a crime as terrible as kidnapping and sexual assault. Using a hashtag “Avalkoppam”, that translates into ‘with her’, that is now trending across social media, we see a movement taking form.

Parvathy wrote, “In the famous but not spoken much about these days, the Actress Assault case of 2017, Edavela Babu and Bindu Panniker pulled back on their own statements in court, well could not have expected much from them. And now it’s Mr Siddique and Bhamaa. I suppose one can understand why Mr Siddique did it but Bhamaa??? Having been a friend and confidant she too denies what she told the cops soon after the incident.”

Filmmaker Aashiq Abu also gave his two cents and wrote, “No wonder the old actor and heroine actress have changed. By taking a favourable stand for the cruelty that happened, these people are also becoming the favour of the crimes. Still the supporters will come together hidden and clear. They think that the law system and the public can always be fooled. Whatever the verdict of this case, will be with the victim until the doors of the final law and regulations are closed. #Only with her.”

Actress Remya went on to question Bhaama and Mr. Siddique’s betrayal not just to the one woman who was wronged here, but to the entire community of women who would have been failed if the man accused of such an heinous crime, walks free because of their lack of guts to stick to the truth. She wrote, “Truth hurts but betrayal? When some one you thought is fighting along with you suddenly changes color, it hurts. Deeply. I have heard about witnesses turning hostile in cases but when the survivor is your own how can you betray her? The fight is real and ultimately truth will triumph. For both the survivor and women at large, this fight will go on. #Avalkoppam”

The four witnesses that have now turned hostile could jeopardise the entire case against actor and assaulter Dileep, the gravity of which comes as a slap to our face. Despite the industry’s efforts in raising their voice and extending their support to the survivor, unless people understand the need to speak up and stick up for the truth, real change would never see the day of light. With justice being compromised here, the stakes are high but we are hopeful that with so many powerful women standing in solidarity for this cause, the perpetrator wouldn’t be allowed to walk free. Not this time, at least.

Also Read : Indian Model Paula Has Accused Filmmaker Sajid Khan Of Sexual Assault. Are We Going To Let Him Get Away Again?