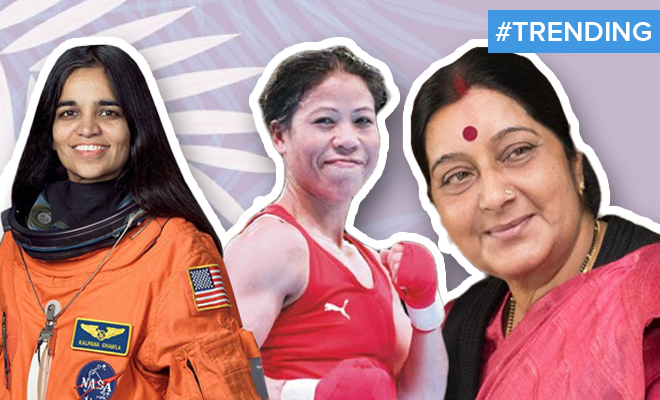 A Woman On Twitter Asks If Men Have Female Role Models. Men Say Yes, And List Out The Sheroes They Look Up To

I remember once we were was asked to write an essay on our role models in school and we had to read it class the next day. Honestly, I loved that session because I realised that a person’s role model says a lot about them. While some named world leaders, authors, their parents and teachers as their role models, the answers of some boys were drastically different. They cited cricketers and WWE wrestlers and a kid even said Hitler *eye roll*. Of course, we were kids and didn’t know much about the entrepreneurs and politicians and thus picked the people we did know about. Although, what was surprising (or not surprising) was that while a lot of girls had male role models, not even a single boy chose a female role model. They went for more, how do I put this, masculine figures to look up to.

This made me think whether boys have female role models at all? And if not, why the hell not? Years later, I got my answer, in a twitter thread! A woman, who probably had similar doubts as me, took to twitter and asked, “Do men get inspired by women?” Another tweet by someone else asked, “Do men have women, heroes?” The answers on these threads are simply amazing. Men said they absolutely have female role models and listed out the names of strong, successful women they look up to.

From Sania Mirza to Kalpana Chawla and Michelle Obama to Indira Nooyi, men named some really great women as their role models. The late Indian politician and the former Minister of External Affairs Sushma Swaraj was also a popular answer on the thread. Apart from these, men also shared how their mothers, grandmothers and teachers have helped them become what they are today and why they have been the ultimate role models for them throughout their lives.

Do men get inspired by women?

Do men have women heroes?

Also Read: A Study Reveals That Female Students Are More Likely To Choose A Field That Their Role Models Have Been Successful In. We Like Where This Is Going

A user listed out women who inspired him saying, “Yes. Who can forget Sushma Swaraj ji and more are MC Marykom, Kiran Bedi, Persis Khambata, Teejan Bai, Malini Awasthy and more are there.” Another user wrote, “Sushma Swaraj Ji. She had many qualities. I’ll talk about only one. Her spoken capabilities. Her speeches were insightful, informative yet captivating. Command on language. straight forward style of speaking yet didn’t insult anybody. Combination of culture and technology.”

Talking about the women in their lives, a user shared how he was really inspired by his grandmom. “I was inspired by my grandmother. She was illiterate but made sure all her sons and her daughter were educated. She even sold her jewellery to send money to my father, her youngest son to pay University fees when the times were tough. She thought a generation ahead,” he said.

There were some really interesting and insightful answers as well. A user commented, “Muthulakshmi Reddy, who was the first: Elected woman legislator in British India. A woman who got into an all men’s college, Maharajas College, Pudukottai. Set up the Adyar Cancer Institute Opened a hostel for Muslim girls & scholarships for Dalit girls.” This one’s my favourite since it was not an obvious or cliched one but really informative.

There were some who credited what they are today to their teachers who inspired them and pushed them to do better. A user wrote, “My female teacher saved my life in 10th grade. Hero. My wife consistently pushes and pulls me to do and be better. Hero. Michelle Obama is of the few remaining people who make me believe in America. Hero. One of the Vice Presidents of my company is a guiding light daily. Hero.” Another user wrote, “My hero is my 2nd Grade teacher. Everything I am today is because of her. Also several teachers of mine in medicine and Endocrinology. My Medicine professor Dr Minal Shashtri and my MD and DNB Endo senior Dr Roopal. On Twitter, @drtejallathia is my hero.”

There is no doubt, women are the backbone of every men without their direct or indirect support we can't get what we want to achieve.

I feel like more often than not, boys are “supposed” to like macho superheroes and boyish toys like cars and guns and eventually they fall down the rabbit hole of gender stereotypes. Plus, the male-dominated areas like sports and superhero leagues don’t really leave them a choice. It’s basic classical conditioning. It is only when they grow older and a get decent education, that they get a hang of these things and realise that gender is irrelevant when it comes to admiring someone’s success. But still, there’s a need to instil these gender-neutral thoughts in the mind of young boys so they don’t see women as the weaker sex or unworthy of looking up to.

A man can and should have a female role model, especially since we have so many strong women in top-shelf positions in different areas who are kicking ass. If you are a man, reading this, tell us who is your role model (I don’t think I need to put “female” before it at this point).

Also Read: People On Twitter Share Stories About Their English Teachers And How They Were Just Simply The Best. It’s So Relatable