A Woman Lawmaker From California Was Denied Vote Through Proxy, So She Did This. Don’t Mess With Women 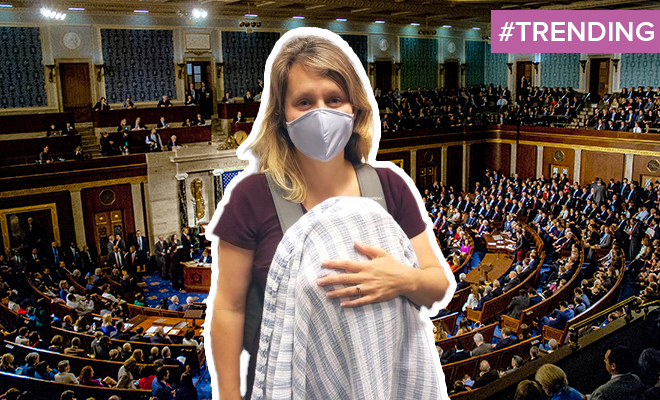 After years of being pressed down by the society and having made to live under the thumb of their male counterparts, you’d think that women would’ve learned to fall in line and play by the rules. Except, they’d be wrong. Much to their dismay and our glee, women, not despite such oppression, but because of it, have now come to learn and over time- master the art of playing by the very rules that were put into place to keep them down. Or at least California assembly woman is making giant leaps in that direction.

A new mother, Buffy Wicks had delivered her baby back in July earlier this year and was in the middle of feeding her one year old daughter, Elly, when the news about a certain bill on housing needing to be discussed on the senate floor came around. Enthused to drop her say into the matter, Buffy was all set for having her vote represented through a proxy, considering the service was made available to everyone during the pandemic, who found themselves at a higher risk of Covid-19. However, the fact that she had just delivered a baby, and was still in a stage where people allow for maternity leaves for childcare, apparently wasn’t enough as she was yet denied her right to vote by proxy.

Now at this point, while we’d be riled at the insensitivity extended towards a mother for having genuine concerns, Buffy Wicks decided to go another way, not letting the rules bring her spirit and what she wanted to stand for get an upper hand. She drove all the way to Sacramento from Oakland with her newborn child, to cast her vote on the critical bill. While doing that, she posted a picture online, and captioned it, “Yep, I’m here! (And so is Elly)”

Also Read : This Survey Proves That Sima Aunty Was Wrong. Women Would Rather Wait Than Compromise On Compatibility When Looking For A Match.

In another video of her on the senate floor, Buffy can be seen giving her two cents on the matter, all the while her daughter stuck to her chest, whom she was simultaneously coddling and cooing to. Painting the perfect picture of a modern day woman, who will never choose to shy away from responsibility, be it of her household, family or work. She said, “I was actually in the middle of feeding my daughter when this bill came up. And I ran down on the floor today because I strongly believe we need to pass this bill.” As her baby started fussing, Wicks added, “And Elly agrees that we absolutely need to pass this bill.” Concluding her speech she mentioned, “And I’m going to go finish feeding my daughter.”

Absolutely devastated about #SB1120. Our housing crisis requires us to act, and tonight we failed to do that.

But I promise you this: I will *always* show up for housing — no matter what. pic.twitter.com/I4n6X07CNp

Meanwhile, California Assembly Speaker Anthony Rendon, who was the one approving such votes by proxy is currently facing a lot of flak on social media for being one of the many people, ultimately pulling women down, as they continue to disrespect their potential as they juggle multiple roles as mother, a lawmaker and so much more.

Seems like her actions set the record for a lot of working moms straight, proving to the world that women would no longer be puppeteered around or bogged down with patriarchal notions, that have otherwise always worked against them. Wicks has shown that two can play at this game, and women, possibly better.

Also Read : A Woman Snarkily Tweeted About Virat Kohli’s Captaincy After Fatherhood And It’s A Glimpse Into Sexism Women Face In The Workplace