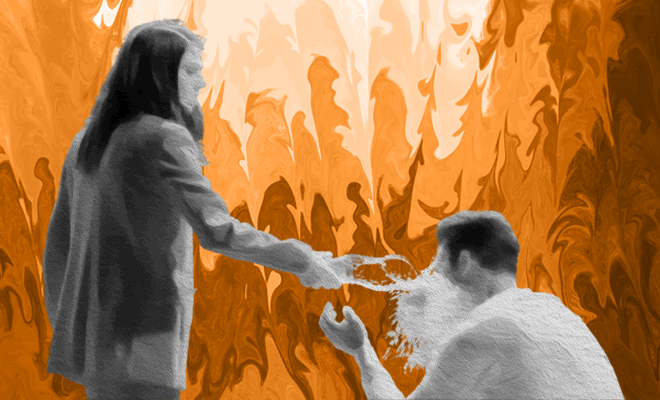 A Woman In Tripura Threw Acid On Her Ex Boyfriend After He Refused Her Marriage Proposal. This Is Not Okay

For the years that I have been working as a writer, writing out stories that I believe make a difference to society and most importantly help in moving a step closer towards the kind of equality that us feminists yearn and work hard for, I haven’t seen the needle move much. After spending so much time churning out content that empowers women, I may have developed a soft corner for our gender. And while for most part that extra care is well deserved, one thing I have realised as a staunch feminist is that I am not unaware to the dark side of a woman. She isn’t always the victim sometimes, she is the perpetrator. And in this case, an acid thrower.

We say this after coming across a rather shocking and distressing piece of news where a woman from Tripura threw acid on her boyfriend after he refused to marry her. Guess, men aren’t the only ones having trouble dealing with rejection.

As per the reports, the accused has been identified as one Binata Santhal, who was allegedly in a relationship with the victim for about 8 years before things between them went sour. Having known each other since school, the two were romantically involved with each other. Binata supposedly shifted to Pune after the victim, the 30-year-old man completed his graduation, and she started working as a maid.

#TripuraAcidAttack: 27-year-old woman sent to jail for attack on her boyfriend https://t.co/qHB93dLxHu

However, in March 2018, the man went back to Tripura, cutting all ties with her and ending the relationship. When Binata went back to Tripura, searching for him in their old village, she couldn’t find him and decided to move to Ranchi, where she worked at a health training centre. A while later, on occasion of a Durga Puja, the woman found the her ex-boyfriend at Belcherra village and proposed marriage.

A woman in #Agartala allegedly threw acid at her boyfriend after he refused to marry her. @Tripura_Police https://t.co/KLGJ5w2tWp

When the man refused her proposal, the woman, unable to control her rage and process the rejection, resorted to a barbaric means of throwing acid on the man’s face. The same man that she had spent 8 years in love with, and wanted to marry not seconds ago, had now become the biggest threat to her fragile mental state and ego, and so, the woman took her power back by ruining his life. In fact, she went on to share how it was how he had ignored her calls and cut off contact and that had enraged her to the point of taking such a drastic step.

Binata Santhal has now been sent to 14 days judicial custody following a complaint lodged by the brother of the victim, Soumen Santal. Meanwhile, the victim is admitted to a hospital in state capital Agartala under critical condition, having suffered injuries in his respiratory tract, nose and eyes.

Also Read : In UP, A Rape Accused’s Family Threw Acid On The Survivor To Intimidate Her Into Taking Her Complaint Back. We’re Failing Our Women Every Day!

GET HAUTERFLY IN YOUR INBOX!
Related ItemsFeaturedTrendingwoman threw acid on boyfriend's facetripura woman throws acid on ex boyfriend after he refuses for marriageacid attack victims menwoman in tripura throws acid on estranged boyfriend