A Woman In Bhopal Divorced Her Husband To Help Him Marry His Girlfriend. This Is Like Hum Dil De Chuke Sanam In Real Life 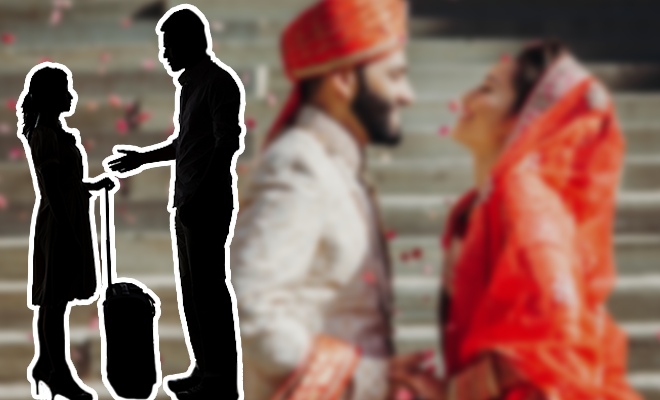 “If you love something set it free. If it comes back it’s yours. If not, it was never meant to be,” is something that’s often told to people suffering from a broken heart. But mostly this has done well only in theory. In reality, the thought of letting go of a person you love with is enough to want you to chain yourself to this person if that will get them to not leave. So this woman who divorced her husband so he could marry his girlfriend has us stumped.

One would also think, it is tough doing this is in a relationship as it is, but to imagine taking this advice in a marriage seems nearly impossible. Remember how much we cried in the movie Hum Dil De Chuke Sanam when Ajay Devgan helped Aishwarya Rai travel across the seas to find her love Salman Khan? Yeah, the whole thing was pretty tragic. And yet, this woman from Madhya Pradesh decided to set her husband free to help him marry his girlfriend.

After having spent 3 years in a marriage with a guy, this woman agreed to give her husband a divorce, all so she could help him get married to his girlfriend, whom he loved and wanted to spend his life with. I know what you’re thinking, ‘who helps out an unfaithful husband AND ensures he gets his happily ever after?’ But guess sometimes when you’re in love, you do what is best for the other person, and that is what this woman seems to have done too.

Bhopal: After 3 years of marriage, wife helps husband get married to his girlfriend.

"He wanted to be in marital relationship with both which isn't legally possible. But the wife is very mature, she divorced him & helped him marry his girlfriend," says lawyer.#MadhyaPradesh pic.twitter.com/hT5SKouMip

Also Read : A Family Court In UP Orders A Wife To Pay Rs 1000 As Monthly Allowance To Estranged Husband. We Are All For This Equality

Reports suggested that the man was in love with two women at the same time – his wife and his girlfriend, and since the wife knew that it is illegal to have two wives at the same time, she decided to step back from the complicated situation and wished the two well. The man’s lawyer said, “He wanted to be in a marital relationship with both which isn’t legally possible. But the wife is very mature, she divorced him & helped him marry his girlfriend.”

We still don’t know where the woman gathered the heart and the strengt to divorce the husband she was in love with so that he start a life with someone else, but for everyone who called true love a sacrifice, we believe this was it.

Netizens have also reacted to the news in mixed emotions, where some are lauding the woman for her agonising sacrifice, while others are dissing the guy for having put her in a tough position like this where she was made to decide on something that’s incredibly heartbreaking.

Also Read : A Newly Wed Wife Filed A Police Complaint Against Her Husband After Finding Out He Was Bald And Was Hiding It With A Wig