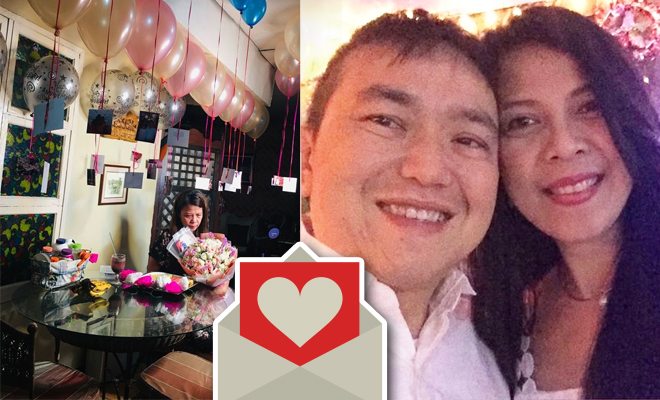 A Man Planned His Anniversary Celebration For His Wife Before He Passed Away. He Even Sent A Scheduled Email To His Daughter To Make It Happen.

This morning, I stumbled upon a story of love and pain – one that made my heart ache with mixed emotions. I felt overwhelmed by the magnitude of the love, effort, and commitment in it while making the cynical me believe that it can be eternal after all. As the story progressed, my heart sunk further into a vacuum and in the end, I sat there, with my face crumpling as I tried hard to hold back my tears. This story is a tear-jerker and it’s real. It’s not PS: I Love You, Kal Ho Na Ho or A Walk To Remember. But it’s a story whose strength lies in the fact that it’s real. Such love is not limited to the movies!

Alyssa Mendoza, a Manila-based woman received an email from her late father who had passed away 10 months ago due to chronic kidney disease. She was startled and she couldn’t muster up the courage to open it until two days later. “3 weeks ago I received a scheduled email from my dad. At first, I was scared to open it cos well who wouldn’t be scared to get and open an email from someone who passed away 10 months ago, plus it was 3:00 am and I was finishing requirements and I was the only one awake in our whole house. Two days after I saw the notification, I decided to open the e-mail and couldn’t believe what I was reading. My dad’s love for my mom IS definitely immeasurable,” Alyssa told Bored Panda.

Her father had written the email, keeping in mind both possibilities that he’d either be too sick to do much or would have passed away. He planned this so well and left sound instructions for his daughter so she makes it happen, even if the florist forgets to send the flowers across on a particular occasion even though he has already paid for everything. In fact, he carefully chose the flowers knowing which ones make her mother happy. “White roses are special to my parents because when my dad was courting her, my mom had two suitors. She told herself that whoever gives her white roses was “the one” and obviously it was my dad who gave her white roses,” Alyssa explained.

She followed all the instructions and made sure her dad’s wish was fulfilled and her mother could get the surprise the way he’d want. Alyssa recalled how she did the preparations late at night, “Our helper and I started setting up for mom’s surprise at 11:00 pm last night and finished at 5:30 am just in time for mom’s daily alarm (6 am). Even though I lacked sleep, the joy I saw in my mom’s face made everything worth it.”

Her father had left a letter too for her mom filled with more warmth and packed with love to make her smile even after his death. Her mom’s reaction? Of course, she was astounded and couldn’t stop her tears. “My mom cried because she misses the love of her life but I could see how happy everything made her because she knew that everything was planned by my dad,” Alyssa admired.

ALSO READ: This Couple Staring Into Each Other’s Eyes Through Protective Gear Is Just So Beautiful. We’re Not Crying, You Are!

How can one not be touched by a story so rare and pure? Where do we find love so strong? It’s so beautiful that even in sickness he selflessly thought of his wife and her happiness. In fact, he put so much effort into it that really, this man is someone we should all look up to. We admire people who achieved great heights but opening your heart to so much love when you’re going through something life-threatening requires strength too. “But even if they’re not physically together, even though he’s no longer here, he was still able to surprise and make my mom happy. Not even death could stop my dad from loving my mom and showing her how much she meant to him,” she concluded.

ALSO READ: High School Girl Married Her BF Who Has Just A Few Months To Live. This Is Such A Beautiful Love Story