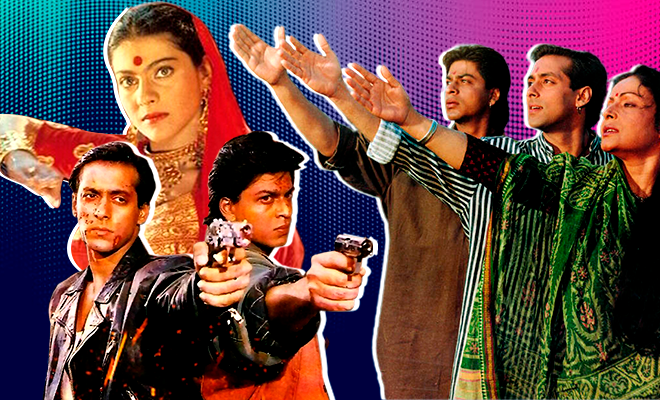 25 Years Of Karan Arjun: When Maa Ka Pyaar Defies Logic, Horses Are The Stars And Actresses Are Props

If Karan Arjun was a mood, it would be my post 10 pm mood when anything that involves using logic is shunned. I like to conserve my mental energy for work hours, you see. Logical reasoning? Why would you want that? I have watched mythological shows which are more realistic than Karan Arjun. Fuck that, some of Rangoli Chandel’s tweets have made more sense than this movie and she hasn’t set a high benchmark.

Why are we discussing this movie? Because it completed 25 years today and it’s amazing that we don’t make movies like this anymore. Of course, earlier we had greed, family drama, reincarnation and village daakus at the forefront and now we have sexism. But well, logic has been defied time and again in Bollywood. I was 3 when the movie released, so I literally only remember that the movie is about an overbearing mother with two overbearing sons and some really overbearing goons. And now that I decided to revisit the movie, I found it really amusing. This is a movie that you should watch when you’re drunk! Here are some of my thoughts about Karan Arjun.

If Karan Arjun can return, nothing is impossible

Durga’s sons Karan and Arjun get killed by a greedy Durjan terribly and she is somehow convinced that they will return. She prays to Goddess Kali and keeps repeating “mere Karan Arjun aayenge” and poof, they are reincarnated as Ajay and Vijay. Like seriously, what are the odds that their names fucking rhyme? And how did God listen to her prays in such an express manner? My Aadhar card took longer to arrive! What is this sorcery?

Before Karan Johar, there was Karan Arjun

When Karan Johar made K3G and gave it the tagline ‘It’s all about loving your family’, Karan Arjun was probably like you can’t beat me bitch! So Karan, Arjun and their mother had no life. Imagine if we start behaving like that with our moms. I am pretty sure my mom will think I am either dying or I am pregnant out of wedlock.

How many horses did they recruit?

Why does every other frame has horses? The reincarnated Arjun works with horses, makes love in front of horses, fights on horses…the horses as just like witnesses and at this point, they’ve seen some pretty horrific things. I think some of the horses had more screen space than Mamta Kulkarni did in the movie.

Salman looked cute before he became a raging bull

I don’t know at what point Salman stopped being cute and became perennially angry. But I found him cute when he was funny and had a shy demeanour. RIP cute version of Bhai.

Mamta Kulkarni was there just to chase Salman Khan and break into a dance randomly. Kajol was probably just there to sport a unibrow and be the damsel in distress. There are so many men in this movie, at some point it looks like the general compartment of a local train. But then again, it’s only recently that women started to get meaty roles and not be just a pretty accessory.

ALSO READ: Throwback Thursday: Cocktail Was Funny But It Promoted So Many Sexist Stereotypes, We Got Sick Of Counting