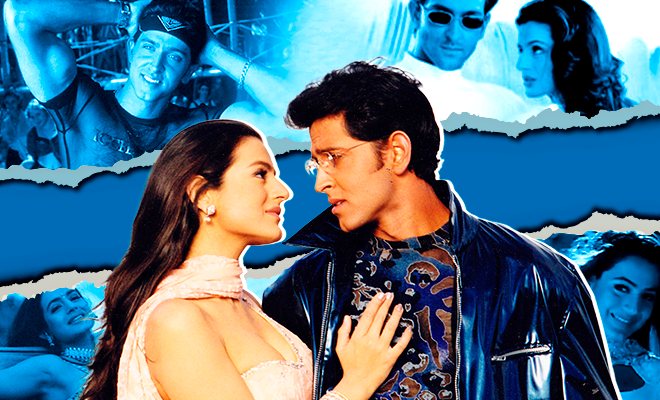 Anniversaries mean a lot of different things for different people. For some it is a landmark, for others it is just another reason to celebrate and for people like me, single and happily so, they are inconsequential. And the same is relevant in terms of Bollywood films marking their anniversaries too. Some come about as a reminder of just how brilliant a piece of cinema it was, while others take us back to wondering why we didn’t file for the refund of the ticket and popcorn. And while, movie anniversaries usually only draw our attention to the story, we do sometimes are also taken back to the cast and crew. As we we are doing today, since the iconic movie Kaho Na Pyaar Hai, celebrates 20 years today.

Also Read : 25 Years Of Karan Arjun: When Maa Ka Pyaar Defies Logic, Horses Are The Stars And Actresses Are Props

A movie that was the debut film for its lead protagonists – Hrithik Roshan and Ameesha Patel, and was blockbuster that shattered quite a few box office records. We were instantly thrown back to the time when we weren’t old enough to spell Hrithik’s name right, but were already dancing to Ek pal ka jeena at every family gathering. And it was while entertaining the thought of the movie for it’s double role twista, Hrithik’s not-so-smooth transition from a poor boy lover to a rich businessman, and the song and dance on a stranded boat, was when it hit me. While Hrithik has never really gone away from public memory – except we wished he had when he did Mohenjadaro – Ameesha Patel, we don’t even know what she’s upto.

And don’t get us wrong here, it wasn’t because she was any less of a star in that movie alongside Hrithik Roshan, but it was because she seems to have really stranded herself on a remote island, for she has almost disappeared from the industry in these 20 years. Kaho Na Pyaar Hai was a resounding hit on the box office and catapulted both the actors to the start of their stardom. In fact, Ameesha Patel gave another hit with her next movie – Gadar: Ek Prem Katha, but soon after drifted into oblivion.

Making appearances only on her own Instagram account, doing what looks like promotions, Ameesha Patel has been missing from the spotlight, considering we don’t remember the last time we saw her headlining a movie or grabbing a pivotal role in a script. Any script. Where as Hrithik Roshan on the other hand, as relevant as ever or even more, is still going strong as a household name and making most of us go weak in the knees.

And okay, we can’t ignore the fact that Hrithik emerged as a much more talented actor than Ameesha , but think about it. All the actresses that we would have seen in 2000s, making their mark with their brilliant work, from Karishma Kapoor to Preity Zinta, have all now been relegated to the sidelines. However, when it comes to the male actors, be it Anil Kapoor, Amitabh Bachchan, Akshay Kumar, or even Hrithik Roshan, all of them till date stand strong, and have even managed to get films where they play the hero.

Today, as Hrithik Roshan among other Bollywood male stars makes it big in the industry, actresses like Ameesha Patel and the likes of her, are getting replaced by newer and younger talent, something that male actors never have to worry about, for they are always given the opportunity to perform way longer than women. After all, it is a known fact that female actresses have a lower shelf life than their male counterparts. With misogyny and patriarchy running deep in the fabric of this industry, we aren’t surprised by seeing how quickly irrelevance comes to women than to men, but we are disappointed. However, with everything around changing up and in the right direction, maybe there’s hope?

Also Read : Dhoom 3 Completes Six Years Today. We Recall Just How Pointless The Movie Was, Even Back Then