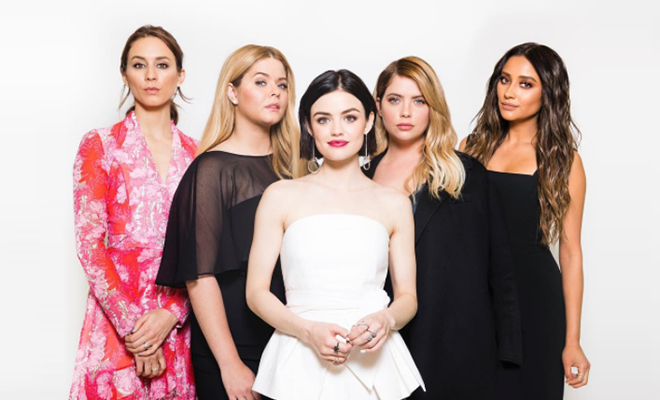 Two can keep a secret if one of them is dead — if you have been listening to this theme song for the past 7 years of your life, you’ve certainly been down the ‘A’ route.

If you no longer see red coats, black hoodies, and maybe your hot English teacher in the same way, then you know you’ve caught the PLL bug — like it or not. Pretty Little Liars has been keeping its audience on the edge of their seats for 7 years, 7 seasons, 157 episodes, and finally, as the series comes to an end this year, we can’t help but have mixed feelings.

Yes, no other show can fill the void the liars will leave us with — I mean, aren’t we going to miss those text message tones (let me just say, in this day and age, who the hell texts when there’s WhatsApp), but we cannot help but feel a little relieved ’cause we’ll finally know, who the f*** A is?!?!

Who is this person who has dedicated their lives to making these girls miserable — doesn’t he/she have a job?

Oh, and if it isn’t obvious — SPOILER ALERT!

First, Toby was a suspect and then Mona confessed; only for Charlotte to take over and Alison to be found alive; and what about the ‘Jenna Thing’, and Ezra knowing Alison before Aria? How can we even forget the twin theory, or Spencer’s real mom?

OMG 7 years, many hookups, a whole lot of murders, and thousands of fan theories later, we will get closure. FINALLY.

So as we countdown the episodes to the UBER FINALE, here are top 10 of the most WTF moments we’ve all had while watching PLL.

1. When Mona is revealed as A

After 2 whole seasons of torturing the girls, we finally find out who this A person is, and it’s none other than Mona Vanderwaal. At this point in the series, it is rather shocking — little did we know that it wasn’t the end of the anonymous tyrant.

2. When Maya’s body is found

Emily’s first girlfriend, Maya, goes MIA, only for Em to find out that she was brutally murdered later in the season. We can’t help but feel bad for Emily — I mean, she just finds out who A is, only to have a thousand more questions about her girl’s death.

Nate, who is supposed to be Maya’s cousin, turns out to be her stalker and a killer, kidnaps Paige and tries to kill Emily. We didn’t quite see that coming, did we? Trying to save them both, Caleb gets shot in the crossfires! But don’t worry, he survives to tell the tale, many seasons later!

4. When Mona was found dead

One of the biggest *GASP* moments of the series, Mona’s body is shown being stuffed into the trunk of a car! After being suspected dead for the longest time ever, she resurfaces (thankfully) and states that she was kidnapped to the dollhouse by A and that her murder was staged.

5. When Toby was on the A team

During a mid-season finale, Toby is revealed sporting a black hoodie, implying that he has been part of the A team along with Mona (you’d think she learnt her lesson the first time around). Although he is only doing it to find out who red-coat is, it is so heart-wrenching to see Spencer’s reaction once she finds out, later on. Considering she just swiped her V card with Toby, his betrayal is a tad mean.

Alison, the girl who is supposed to be dead, was apparently buried alive, and rescued and kept in hiding for years. It is later revealed that she was trying to find her tormentor before surfacing back home. However, the girls snooping lead her to come out of hiding before her time.

Once again, Aria’s snooping around leads her to pick up on clues that Ezra already knew Alison before they even met. In fact, the latter 2 were sort of seeing each other for a bit, until Ezra realised that Ali was way younger than she said she was.

This was many moments pumped into one. Initially, we find out that Jason DiLaurentis was Spencer’s half brother, then we find out that Jessica DiLaurentis had another child, Charlie (aka Charlotte, CeCe). CeCe Drake, who snakes her way into the girls’ lives, turns out to be A number 2 and Alison’s half-sister/cousin…yeah, shit gets complicated.

One of the most eerie moments of the show, the liars are kidnapped into an underground basement by CeCe, and are confined to scaled model versions of their own rooms. The ‘dollhouse’ is controlled by CeCe, who plays dress-up with them, including with the presumed dead Mona.

In the recent unveiling of events, it is revealed that Mary Drake, Jessica DiLaurentis’ sister, was Spencer’s birth mother, while her father is Mr Hastings (sheesh, he really sowed his seeds everywhere). After the medieval head chop of Noel Kahn, Mary Drake reveals the shocking news to Spencer!

And that’s all, folks! After trying to decode these various complicated plots and sub-plots, it’s making me wonder why the hell we were watching this in the first place! Oh well, as long as we get to know who A is…that’s all that matters! Loyal PLL fans FTW.

New mothers need to listen to what she has to say!