#Inspiration: This Woman Stood Up For Another Woman Who Was Being Harassed By A Pervert. Onlookers Must Not Be Silent 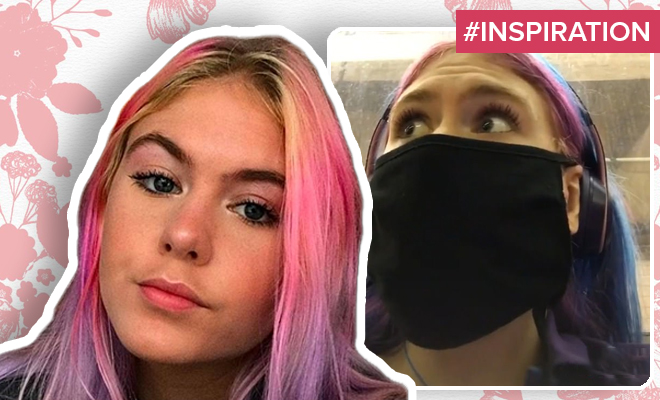 Years ago, I remember peacefully walking with the guy I was dating back then and just being in a jolly mood. That is when we came across a man slapping and hitting his partner on the footpath and nobody was stopping him. And I was so disturbed by the visual, we wanted it to stop. Which is when my boyfriend interrupted him and made a big scene out of it. I don’t remember in detail but the cops came and gave him a warning and all that. Another time, I was looking out from my window and suddenly a guy started hitting a woman he was with. Immediately, a couple of guys ran towards them to save her. Unfortunately, in both cases, the men and women were related, and eventually, they did leave together. However, when people rush in to help someone in need, that’s when your faith in the public remains intact. Why else do we prefer being in places that aren’t secluded? We feel a sense of safety when there are other people around because we trust the goodness in human beings and we hope that should we be attacked, people will help us. And yet, some people choose to ignore someone being harassed.

However, here’s a woman who did the exact opposite and put an abuser in his place. Caitlin Wilkinson, an art student in New York City, stood up for a woman on the subway when nobody else did. She called out a man who was intimidating the other woman by passing lewd remarks and telling her how he’d like to do her. Caitlin recorded a video of her yelling at that man and although you cannot see him, you can hear the sick things he was saying. She posted that video on TikTok and it went viral with lakhs of views.

In the video, you can hear the man telling Caitlin that she is way up in his business. Which is when Caitlin responded saying, “What am I supposed to do when you’re yelling at a random woman about your dick…you’re sexually harassing someone and I’m not gonna let you do it when it’s not right.” However, that man said she is just being a feminist as if that’s a bad thing to be. But Caitlin hit back saying, “If that’s what I have to be, bro, to tell you to stop bothering a human being.” She seemed visibly upset and concerned in the video.

Speaking of the incident, Caitlin told BuzzFeed that the woman looked uncomfortable as the man spoke obscenely to her. She apparently told him that she has a boyfriend but he didn’t care. Caitlin said he was “explicitly talking about how he was going to fuck her and what it would feel like for her.” That’s when she looked around and saw that they were the only women on the train. “I started looking around to see who else was on the cart, and we appeared to be the only two women on the train. There were three other men sitting somewhat near the situation. Nobody else on the train seemed bothered by what was happening. The man then stood up and began walking towards her, grabbing his dick and blatantly staring at her,” she told BuzzFeed.

Why didn’t those men bother to do anything about it? What is this onlooker mentality? “I think [this event] very obviously points to the fact that this is a very real and often thing that happens to almost every woman out there. In this society, we’ve been trained to mind our own business, and that catcalling and pushing boundaries is something women are just supposed to be used to. It doesn’t matter what you wear or what you’re doing, the majority of men still think they have the right to openly sexualize people however they please,” Caitlin expressed.

In fact, she said she could take a stand because she was inspired by other women who did so. “The only reason I was able to stand up to that man was that I’ve been inspired in the past by other women doing the same thing. Watching a woman find their voice and having the power to be who they want to be, unapologetically, is what inspires me daily. So, I just want this video to do the same for those who need inspiration. When you see something, and your gut is telling you it’s wrong, assess the risks of speaking up, and if it’s safe for yourself and the people involved for you to do so, then do it. If it’s not safe, try and get the person alone, and check up on them,” Caitlin explained.

Caitlin said that witnesses have to speak up so that such acts are called out and not normalised. She said, “Almost every woman in the world can tell you the countless times they’ve had experiences like these, how invasive and attacking it feels, and the common theme is no witnesses ever speak up to stop the behavior. In order to break the cycle, people have to be willing to call it out when they see it, and hopefully correct the behavior, or else these people will continue to think it’s acceptable.”

ALSO READ: #Inspiration: A Woman Sought Advice On Choosing Between A PhD And Marriage On A Facebook Group. The Comments Prove That Women Choose Education

People poured a lot of love and admiration in the comments. Revealing how surprised she is by the response, Caitlin said, “The majority of responses come from women, telling me I’m brave for what I did and how proud they are of me, which is wild. Honestly, whenever I read the comments, I just feel like I’m looking at somebody else’s video, most of them are so kind.” Caitlin is truly a queen and I hope people feel inspired to not be mere onlookers when someone needs help!

ALSO READ: 27-Years-Old Vanshika Goenka Is Helping Women Find Jobs In The Pandemic With Her Online Career Community “Kool Kanya.” How Empowering This Is!

We hope this works out well.