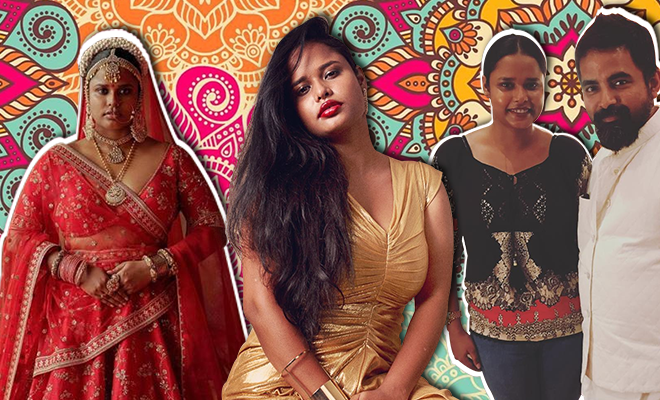 Varshita Thatavarthi Is A Model Who Didn’t Get Work For Being Dusky And Curvy. Till She Got Her Break With Sabysachi

Just last week, Sabyasachi released his latest bridal campaign on Instagram and it is beautiful. The new winter bridal collection featured gorgeous models representing different body types. From petite to curvy, the models looked resplendent in the new ‘Charbagh‘ collection and we were very impressed. One model, in particular, got the biggest cheers from us and it was 25-year old Varshita Thatavarthi. Her curvy frame on a major Indian bridal campaign was very refreshing to see!

Varshita spoke up about her experience being a Sabya muse with a fashion publication The Voice Of Fashion and the revelations have got us shook. Varshita got very real about body discrimination in the modelling industry and revealed, “I find it annoying that models are expected to be size 2 when an average Indian woman is size 16. So who exactly is the fashion industry representing? I find it repulsive when people address me as a plus-size model because it goes to show that people like to categorise women who have fuller bodies. It is difficult to cope in an industry that has been conditioned to believe that anything above size 2 is an aberration. I was rejected for five years because I had a fuller body and dusky skin. No agency in India wanted to represent me. The industry notoriously promotes body discrimination”, she elaborated.

Her Foray Into Being In the Public Eye

Born in Visakhapatnam, Andhra Pradesh, and raised in Delhi, Varshita decided to try her hand in modelling and acting after college. She revealed, “I wanted to be part of Mani Ratnam’s films. I thought I’d stand a better chance if I learnt Tamil and lived in the same city. I also felt if other filmmakers constantly rejected me for the way I looked, filmmakers like him might find something in me to work with since he’s known for launching unconventional looking girls in the film industry. It never happened though, but fortunately I met Sabya sir”, she divulged.

Her Run-in With Sabyasachi

Varshita has the classic ‘model spotting’ story with this one. She revealed how she had a run-in with Sabya himself at one of his jewellery exhibitions. “Sabya sir told me that I was very beautiful. I was thrilled. I thought if he thinks I’m beautiful, I must be beautiful,” she says. Two months later in June, his team got in touch with her and asked her to visit Kolkata for a trial shoot. “I was flown to Kolkata, where I met sir (Sabyasachi) and did the bridal shoot (which was later posted on Women’s Day)”, Varshita said.

Her Struggles With Body Issues

Before finding a cause with Sabya’s campaign, Varshita struggled to get work in the industry as a curvy woman. She tried losing weight to fit into the “acceptable” body type. She confessed, “But I wasn’t happy then and it probably showed on my body. I still didn’t manage to get any work. But I’m much happier and healthier now”. We love her confidence and message of accepting your body type, cheers!

Varshita also revealed, “Post my campaign with Sabyasachi, I have been flooded with messages from women across the world thanking me. And now I want to work with all the major fashion and beauty brands to raise awareness about body positivity. I want every woman out there to look at my picture and feel secure about her shape and skin”. Love!

Sabyasachi Gets Hate For Featuring Models With Cleavage. How Are Breasts Against Indian Culture?

Mumbai Girl Naomi Janumala Is Hanging Out With Rihanna And Starring In Her Fenty Campaign. We Dig it!