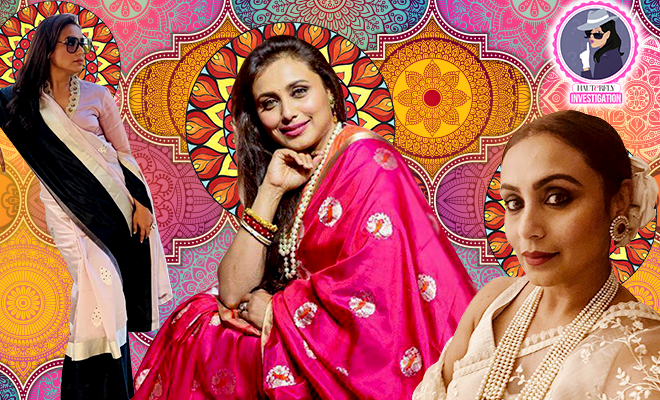 Hauterfly Investigates Rani Mukerji’s Self-Styling Game In the Age Of Instagram. She’s Got A Few Favourites

Bollywood has seen a major shift in the way actresses are working and making their presence felt in the industry. From a steady rise in women-centric films  (we are thrilled!) and them being both critical and commercial hits to actresses finally talking about the wage gap, the new generation of actresses have changed the game. They have also used the explosive popularity of Instagram to their advantage and made celebrity styling into a proper career option. Before social media was so big, actresses used stylists for red carpet events and award shows, you know, where they will be clicked and talked about in the newspapers the next day. All that, and more has changed and now there is not a single new release that doesn’t have an elaborate promotional junket attached to it. This trend has made celebrity fashion more accessible to people and considering how we have some of the most talented stylists working today, we love the spectacle and glamour of being a working actress today. But there is one talented actress who has still not warmed up to the whole thing because Rani Mukerji is a self-stylist.

The actress was famously been quoted in an interview last year, saying “It’s the easiest to be an actress in today’s day because the actors are pampered so much — there are ten people in their teams roaming with the actors everywhere! We never used to have that. I feel uncomfortable with that. In fact, I keep telling people from my team to not flock around me because I am not used to it. We have just been doing things ourselves. Today, there is so much help that the actresses get. From make-up artists, stylists and physical trainers, security, to managers, it’s an entire bunch of people telling you what you have to say. Actors are pampered a lot, but back in the day, we used to do our work and go back home”.

Rani is famous for being hands-on  and wanting to do her own thing. From helping out with her own makeup to picking her looks herself, she might be the only actress who hasn’t hired a glam team to do her bidding for her. We did, however, pick on some details that define her close personal style, and they are all rooted in how we dress…simply because we liked it!

Her Love For Sabyasachi

Rani has donned many Sabyasachi looks over the years, most recently, for her Mardaani 2 promotions. She has favoured the quintessential Sabya saree for a high-profile wedding. This habit can be attributed to the friendship she has maintained with the designer, long before we even knew anything about fashion. A source close to them had once revealed, “As we all know, Sabyasachi has forayed into jewellery and his collections are wowing the world. The designer had thoughtfully kept away the first-ever piece of jewellery designed by him – super-exclusive Polki earrings with South Sea pearls -, especially for Rani. He had created the earring keeping Rani’s personality and her charm in mind. He wished her all the best for Hichki while giving the gift. Rani was naturally emotional when she received this from Sabya”. Now that is a whole other level of a class act we don’t see a lot of.

ALSO READ: Dear Bollywood, Bralette Pantsuits Are Sexy And All But The Average Girl Can’t Possibly Wear Them

As a 90s kid, Rani Mukerji is one of my many style icons growing up. I wanted to be her in Kuch Kuch Hota Hai and fell in love with sheer sarees when she sashayed in them on screen in Saathiya. The effortless charm of carrying a garment on screen comes with impeccable personal taste and Rani’s obsession for gorgeous sarees from the label Raw Mango is proof of one. The label is her go-to for festive and promotional wear, the many Benarasi brocade numbers for her Kolkata leg of Mardaani 2 promotions being a whole mood for stunning sarees!

Her Love For The Labels

Even though Rani likes to keep things simple, she seems to have allowed herself some fashion indulgences. The woman literally walks around head-to-toe in high fashion labels, even while doing chores. We’ve seen her sport Gucci, LV, Dior and many more. We do wish that they were styled better though. The only time we crave for her to have a stylist is to style these luxury pieces!

While Rani loves to show off her labels, the concept of an “airport look” is completely ridiculous to her. In an interview back in 2017, she confessed “I understand the pressure that actors go through today because they are constantly judged. They are constantly judged even when they are going on a flight. Earlier, when you had to go to the airport, you prefer comfortable clothes especially after the security systems became so strict, people wanted to wear slippers and go but today you cannot imagine anyone wearing slippers and going on their flight because then people will say Look at her or him, they are wearing slippers. Everybody is getting judged. There are stylists who dress you up for the airport and I find it hilarious.”

It is very fascinating to see Rani do her own thing in the age of Instagram. While we wonder how long she can keep it up, it is also a lesson in not losing your originality when you are constantly in the limelight. Some of the younger girls can really take a note or two from her!

ALSO READ: Mardaani 2’s Trailer Is The Most Disturbing Yet Hard-Hitting Thing You’ll See Today. And You Must.