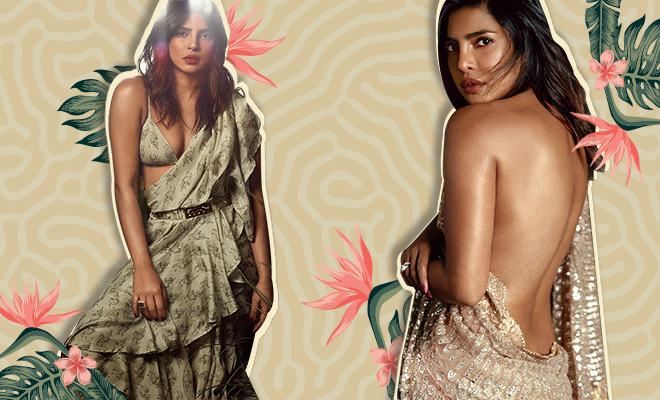 Priyanka Chopra Ke Choli Ke Peeche Is A Lot Of Drama. Why Are People Offended By A Missing Blouse?

I am Bengali and have grown up watching my grandmthers and great aunts go about their daily lives in a beautiful taant saree, sans the blouse. It was so normal, so usual for us, that no one even batted an eyelid. The blouse wasn’t missing, it simply wasn’t to be worn. There was nothing vulgar or sexual about this, the saree was draped beautifully but it wasn’t revealing in the least. That is why the image of Priyanka Chopra Jonas on the cover of a major international fashion magazine in the same look was exceedingly exciting to me. It is bold, it is unapologetic and PeeCee owned it! She looks like a glowy goddess all set to conquer the world.

ALSO READ: Priyanka Chopra Sizzles On Magazine Covers, Says She Wants To Change The World. Such A Rockstar!

Priyanka posed for the July 2019 issue of Instyle magazine in a gorgeous Tarun Tahiliani saree. PeeCee, however, decided to skip the blouse because why not, it’s her body and magazine cover, it is HER CHOICE. This was possibly an editorial call, or a styling one, either way, we are on board.

A large segment of the fashion and entertainment industry were all praise for her efforts to shine a light on desi designers. It was hunky dory, till it wasn’t. But then, self-professed ‘culture ke rakhwale‘ entered the foray and began spewing their ignorance. Calling the look “vulgar” and “shameful”, the actress was slut-shamed for this particular styling. Here’s the thing, a saree without a blouse is not new, it has been a part of our culture all along. From Zeenat Aman on screen in Satyam Shivam Sundaram to actual Konkani women in real life, this is not new for women in our country. However, this picture offended a lot of people because, well, we don’t know.

Designer Tarun Tahiliani defended the choice by saying, “There’s nothing vulgar about it. In fact, not using a choli makes it a global statement. The transition from alluring Indian beauty to this modern goddess for a mainstream fashion cover only speaks of her [Priyanka] versatility. She is truly a modern Indian icon”.

Priyanka was also trolled for another look where she is in a pretty Sbaya saree and a bralette blouse. “This is just a bra with the material wrapped around waist (sic).”, a user commented. Haven’t we all seen the bralette blouse on the screen like a million times already? Or on the red carpet or any promotional event. How is it offensive now?

Priyanka has been personally credited with the choice of showcasing Indian designers for the shoot. She hoped to present an artistic take on the classic style. “My problem is when it comes to Indian fashion, there are always these shiny, sequinned, over-the-top Christmas-tree outfits.”, she said. “Those are not the sarees I wear. I grew up with my mother wearing sarees to the hospital, as a doctor. She’d wear these beautiful ones made of French chiffon, with a bindi over here. And the nape of her neck would smell like Dior’s Poison. That, to me, was a modern woman. And that’s what I want to show the world.”, she revealed.

We personally love the fact that they put a woman in saree on a cover of a big fashion magazine. It is a step forward for inclusivity in fashion. Let’s not taint it with ignorance, shall we?