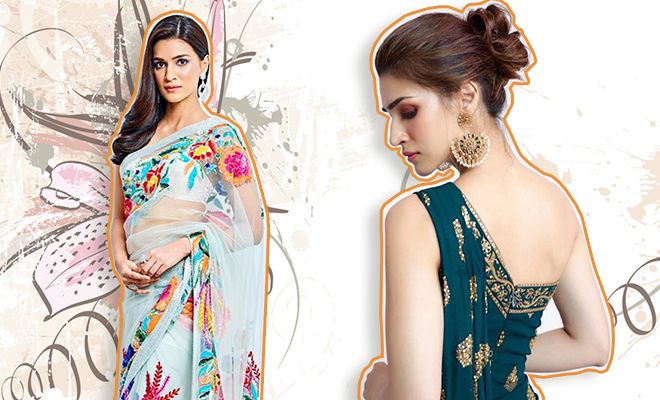 Kriti Sanon Says She Feels Sexiest In A Saree, And We Can’t Disagree At All!

Actress Kriti Sanon is busy with her upcoming cop-comedy film, Arjun Patiala. The trailer of the film received tons of praise and we know it will definitely be a stand out film. Kriti Sanon, Diljit Dosanjh and Varun Sharma will be seen in comic roles and the trailer itself left us in splits! On Tuesday, Arjun Patiala just released their new song, Main Deewana Tera and the song is definitely going to be the next party anthem. Kriti looked stunning in the song, wearing a yellow saree with a blue sequined blouse, and we couldn’t get enough.

The actress can rock any outfit and there is no doubt that she has a body to kill for. But according to Kriti, she feels nothing can make her look sexier than a saree and we think so too!

The Lukka Chuppi actress wrote,”Nothing feels sexier than a saree!! ? Heard Main Deewana Tera yet?? Link in BIO!! #ArjunPatiala @maddockfilms @tseries.official @rohitjugraj.” Well, no one can deny that either! Kriti Sanon will be seen playing the role of a journalist in her most awaited film, Arjun Patiala. We are looking forward to see the chemistry between the trio in the must-watch film.

While we are waiting for the release of the film, which will tickle your funny bone, here are some of Kriti Sanon’s sexiest saree looks.

Which of Kriti’s saree looks do you like the most?