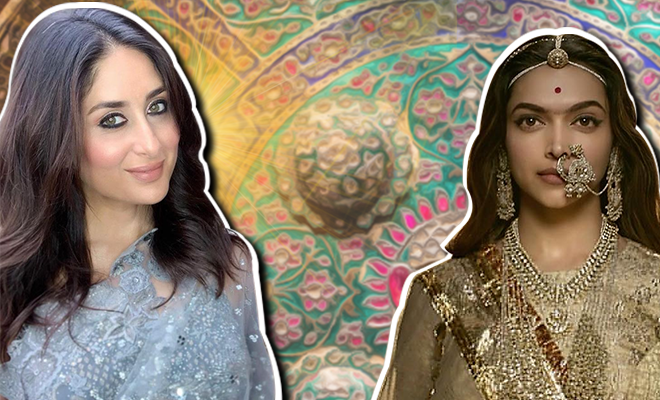 It is not unheard of that multiple actors step into the shoes of a popular character. With Kareena Kapoor Khan’s new Khush magazine spread, there is a role we are now itching to see her play. The actress Nawabi charm and diva-like approach to a vintage bride is a look she never got but deserved. The UK-based bridal publication went with the styling of fashion house Rimple & Harpreet Narula for Bebo. They are also the genius creators behind the elaborate costumes we saw on Deepika Padukone in the 2018 epic period drama Padmaavat.

Kareena looks absolutely resplendent in this ‘royalty’ themed shoot. The actress was styled in elaborate outfits, bringing out her in old world and regal charm, making her look like a maharani from a bygone era.

We totally crushing on the vintage aesthetic of shoot! The garments in their rustic hues combined with Bebo’s tanned and bronzed makeup is fabulous. The outfits seem to be carefully chosen to represent every kind of bride…the ones in feminine lehengas and the ones in a sheer saree, they are all in there!

The feature was shot in the award winning restaurant Paradise Kensal Green, in the west of London. The place looks like it’s from another time, much like Kareena perfectly embodying the old world vibe.  The many looks styled on Kareena are part of a special collection curated by the designers. It is heavy on motifs that were inspired by cultures all over the world. We couldn’t help but draw the parallels of opulent textile, heritage jewellery (‘Kundan’ being one) and womanly silhouettes between Kareena and Deepika’s look from the movie!

For Sanjay Leela Bhansali’s magnum opus, the couturiers delved into extensive research as well. They revealed, “The extensive use of colors in Rajput attire has connotations associated with culture, religion and climate of the province with each colour having a deep rooted meaning that was used to convey emotions, seasons, customs and ceremonial occasions. Kesariya (saffron) and other shades of yellow are extensively used in the attire of both men and women and have since time immemorial been regarded as auspicious colours. Traditionally, the color was prepared using saffron leaves and was hence used mostly in the garments of the Rajput aristocracy, given the expensive value of the raw material. The colour was used in their wedding robes and was also associated with the brave warriors who died fighting on the battlefield.”, they elaborated.

It is true that a character on screen brought alive through the costumes. The creations by Rimple & Harpreet Narula on both Kareena and Deepika seem to tied with one common thread…a close attention to detail. Whether it is the ruffled lace sleeve on Bebo’s plunge neck blouse or the many hours of handwork that went into Deepika’s court looks in Padmaavat, the artist’s work is what shines the brightest!

Check out the rest of catalog of looks done on Kareena for the feature and some BTS monents, below!

Pssst…ever wondered if Bebo was a fan of Tik Tok? This silly moment with her fashion stylist behind the shoot will clear all doubts!