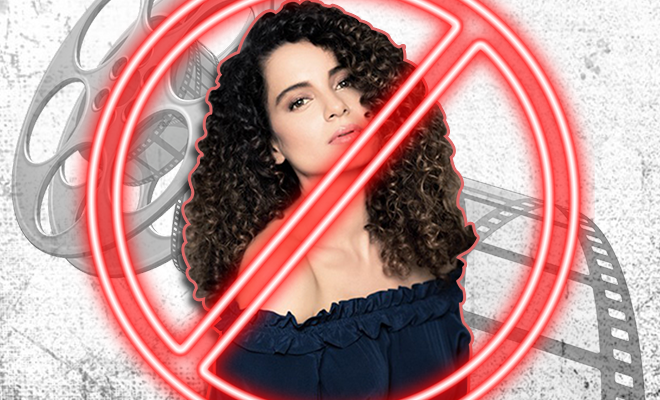 Kangana Ranaut Gets Boycotted For A Spat With A Journalist. We Feel Like There’s More To This Story

It’s been a while since I’ve been writing professionally for a while now and the world of journalism has embraced me. Or has it? I won’t lie, it is a rather complex industry. Our work revolves around what is trending, and it is rare that it’s not Bollywood. From so many movies now dropping in and a new “star” appearing on the horizon every day, it’s clear that there are going to be favourites. And alarge part of our job is to cover them. It’s tricky, this covering them business. Because while you can get uninhibited access to stars, it could also involve a lot of drama. And it is exactly something of this sort that unfolded recently at a press conference involving Kangana Rananut.

The team of the upcoming movie Judgemental Hai Kya was out promoting their film, and during once such promotional event, the lead actress for the movie, Kanagana Ranaut got into a heated argument with a PTI Journalist, Justin Rao. The argument started with Kangana Ranaut refusing to even letting Justin complete his question, because get this, he reviewed her previous movie- Manikarnika in bad light. However,we must admit that this is where the clip starts and we may have entirely missed the bit before it. She said, “You were bashing Manikarnika. Have I done anything wrong by making a film on nationalism? You called me a jingoistic woman who is making a film on nationalism” and ended up accusing the journalist for running a smear campaign against her. Yes, this was pretty  immature, her reasons and actions proved that the actress doesn’t take well to any sort of criticism, professional or constructive.

Entertainment Journalists' Guild of India boycotts Kangana Ranaut, decides to "not give her any media coverage" over an incident where she accused a journalist of running a "smear campaign" against her at a song launch event of movie 'Judgementall Hai Kya'. pic.twitter.com/ysOOV5KYrE

And while during such conferences and promotional events, the journalists do have to ensure celebrities’ tantrums, this time the tables seemed to have turned on the Manikarnika actress. Justin wasn’t the only one who felt wronged at the hands of the actress, an entire flock of journalists that were present raised their voice against her. Journalists are always strongly opinionated and are rightfully entitled to sharing their reviews and opinions as they seem fit.

This incident, soon caught many people’s attention, ultimately leading the Entertainment Journalists’ Guild of India to boycott the actress from further media coverage. There was also an open letter that was circulated, addressed to the team for the movie Judgemental Hai Kya, that said, “We, the members of Entertainment Journalists Guild of India (EJGI), demand a written a public statement from you, Balaji Films, and Ms. Ranaut, condemning the incident and in particular Ms Rananut’s behaviour. We are here to discuss if you can support our cause and how we can support your film ‘Judgementall Hai Kya’, in return. You have always been supportive to righteous causes and we expect you to stand by us in this matter.”

Just another star being unhappy with a journalist for doing his job. They all want cheerleaders. In the name of being candid KG is bashing the guy in front of all and cameras. Demeaning the work.@JustinJRao you did very well.https://t.co/l7OBZoCrxa

Great to see journos standing up to #FarziNationalists like #Kangana.
Questioning them or flop #Manikarnika makes you question Nationalism??
Not only did @JustinJRao stand his ground – he shut the MC trying to silence him.
Kudos to @ektaravikapoor for allowing journo to finish. pic.twitter.com/Vuf7ZbAXj9

#KanganaRanaut and @Rangoli_A , kudos to the journalist @JustinJRao who dared to ask you valid questions and exposed your bullying and hypocrisy. Its time for the public to see your dual face and how success went on to your head. pic.twitter.com/dVTSfVzgxN

They further wrote, “We, as a guild, have collectively decided to boycott Ms. Ranaut and not give her any media coverage. Rest assured, we will not let this matter affect ‘Judgementall Hai Kya’ in any manner and will be supportive of your film and other cast members, barring Ms Ranaut.” And after the kind of things that went down, we think Kangana Ranaut should’ve seen it coming.

It is one thing to stand strongly beside the work you did and what you believe in, but to take out personal animosity on a professional front was not expected from the unabashed actress, Kangana Ranaut. And while there is still a statement or a response pending from her side, Balaji Telefilms has already issued a statement on the matter saying, “A lot is being reported about the debate that ensued between our film JudgeMentall Hai Kya‘s actor and journalist Justin Rao. Unfortunately, the event took an unpleasant turn. While the people involved in it fairly held their own perspectives but because it happened at the event of our film, we, as the producers, would like to apologize and express regret for this untoward incident.”

And right when the issue was starting to simmer down or even before we or the journalists could absorb that apology, Kangana’s sister Rangoli Chandel, again gate-crashed the conversation she had no business swooping in on and wrote a rather eloquent message addressing all the journalists. By this time, our eyes have lost their eyeballs, we’ve rolled them so hard, and just hoping that Kangana’s reaction is not even close to her sister’s prediction for it.