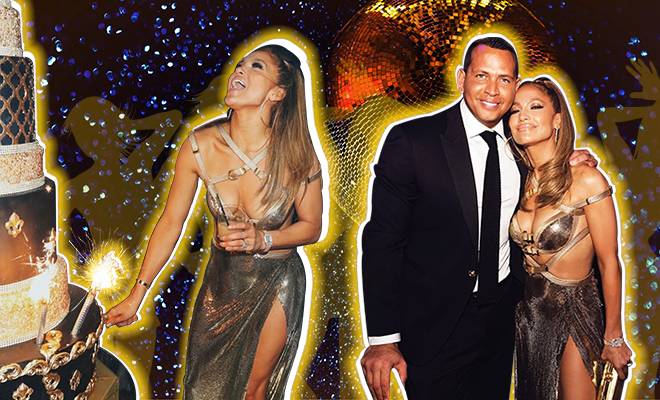 Let’s do a rundown of women who DEFINITELY hold the secret to the fountain of youth! On our shores it will be the effervescent Tabu, the graceful Madhuri Dixit and the ridiculously beautiful Rekha, to name a few. As for the women of the world, there is one boss-lady who has consistently enjoyed being of top of her game. For the 90s kids, it’s the pop star who made us grab our BFFs and come up with countless living-room-dance-routines…Jennifer Lopez!

This ultimate diva has been a constant source of inspiration for women who want to be the best at what they do. She celebrated her 50th birthday just last night. Do a double take. Yes, 50. If I could look like that 50…no wait, how do I look like that at 50?

And by the looks of it, the nightclub that hosted her bash seems to have suffered from major structural damage…from just the energy in the room!

But for our tender hearts, it was her golden bondage-inspired Versace dress that made us do a double-take (and then many more..) at her Instagram stories. It’s not the luxury price tag of over 10 lakh (whoa!) or the fact that this slinky sheer dress is too sexy to handle! It is what the dress represents. The custom golden look on J.Lo, which is an update of the FW/19 black number, has numerous inspirations. Most importantly, it is reminiscent of the iconic custom dress founder Giovanni Versace hand made for his sister, now CEO, Donatella Versace, way back in 1992…

Other than the fact that 90s is now a time of immense nostalgia and completely different fashion, this dress broke grounds on how fashion saw female designers or women in general. It was also a shift to not see Donatella as just a sister, but an equal stakeholder in one of the biggest fashion houses in the world. The dress picked inspiration from fetish fashion, bondages and eroticism. It was also designed to look like gladiator armours. Historically only worn by men, a woman wearing a gladiator dress is the ultimate power move in our book!

We are not surprised that Lopez will pick such an iconic design from the house of Versace for her big day. J.Lo oozes power and ambition. What better way to showcase that than an iconic label and design? The 50-year old has had a prolific career, the rules of which she wrote herself. If there’s anyone who deserves a gladiator dress, it’s Jenny From The Block!

Now that we are done with talking about her outfit,  let J.Lo teach you how to bring in a birthday in style!