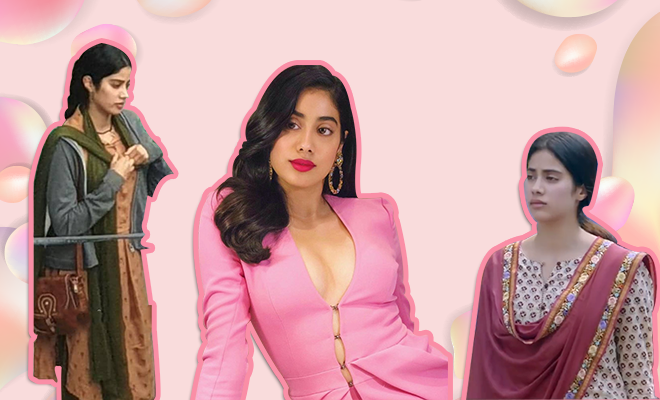 Janhvi Kapoor, Your Dedication To Your Roles Is Cool But Can We See You In Something Glamorous On Screen Now?

Janhvi Kapoor seems to be on a quest to minimise the wardrobe and makeup budget of any movie she’s in! The actress has a tendency to seek out stripped down movie roles and her recent film Rooh-Afza has pushed the envelope quite far. This is indeed an interesting contradiction because in reality, the actress is soon becoming one of the major style stars for the millennial generation.

Janhvi’s style is unique for such a young actress in the industry. While there have been a few missteps, the actress usually turns out in well put-together ensembles!

Hr beauty looks are quite interesting to ponder on as well. She seems to be a fan of recreating classic looks from yesteryear actresses. She is clearly a fan of decking out, which makes us wonder about her penchant to choose movie roles which are a total contradiction.

Janhvi’s look in Rooh-Afza looks authentic and raw. The horror comedy will see their actors in their most de-glam selves, which leaves no room for elaborate costumes and makeup. According to the film’s producer, Dinesh Vijan, “For the female lead, we needed someone who could portray two contrasting personalities with ease, and Janhvi stood out. She really connected with the script. Her talent is still raw, but she is excited about being moulded. The script is young, refreshing and totally crazy, and she is exactly that.”, he said.

A still from the movie shows that she can get this look down pat. The muted tone outfit with that makeup which looks natural, we can tell that she knows how to work this.

Janhvi’s previous, and debut, role in Dhadak, also saw her put down the mascara and let her unfiltered acting chops show. The actress seems committed to picking roles which do not hide behind glitz and glamour, we think that is quite impressive and bold for such a young actress! But also, we would like this actress pick out something more fun and relaxed, one that will let her real personality shine through.