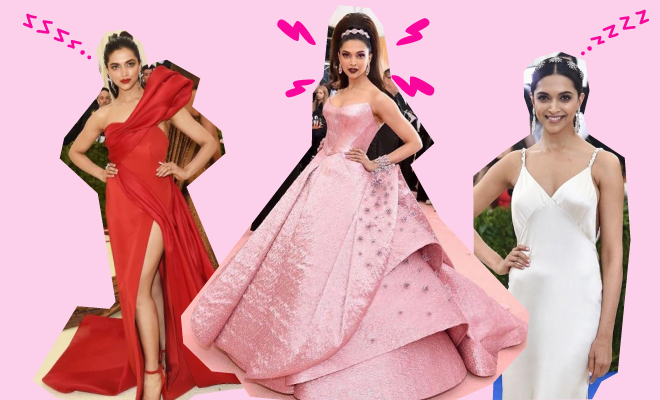 Deepika Padukone And Her Series Of Uninspiring, Boring And *Pakao* Outfits At The Met Gala

If you were to ever pin down Deepika’s style to a few adjectives, it would be classic, sexy and possibly, safe. You will see her stick to a few tried and tested silhouettes, outfits that flatter and hug her curves and you can’t fault her for it. It looks great on her. She knows what works and she uses that to her advantage. And we’re all for it.

It can be great for appearances and film promotions. When she has to represent a brand or project a certain image, it works. When she has to be in character, depending on her role in a movie, that’s absolutely acceptable. In fact, most of the time, Deepika steps out in outfits that absolutely smash it out of the park.

Then why is it that when she goes to a global platform like the Met Gala or the Cannes Film Festival that her outfits while pretty, are absolutely off brief? Case in point, her Zac Posen pink number at the Met Gala 2019. It’s pretty, yes. It’s Barbie-like, yes. But is it based on the theme where taking a risk was intrinsic? Nope. In fact, Deepika’s outfits compared to what the others have done is practically a snooze fest.

The Met Gala’s theme of camp was the chance to experiment, to dial up the drama and show up in something outrageous. Why Deepika and Shaleena would go with something so safe and so average, it borders on boring, is beyond us. The only thing that was exciting about the blush pink gown was the hair which was BIG.

But this isn’t the first time Deepika has been cautious. In 2017, at the Met, she turned up in a white Tommy Hilfiger outfit where she could be confused for a bride, or someone entirely out of place (which she was!).  Why she came dressed like this shall forever be a mystery, but we dismissed this, at that point, as a one off. This was the same year that Priyanka wore the outfit that went on to become history, so…

But in 2018, when she turned up in a fiery red Prabal Gurung outfit, we knew that Deepika wasn’t getting the memo. While the outfit was great, for the Met, it wasn’t nothing to write home about. In fact, it was so forgettable, we turned up a blank when we racked our brains for what she wore back then.

While Deepika is our poster girl for being beautiful and stylish, when it comes to walking the red carpet, she certainly needs to up her game. We think she should take risks. We’re sure she would own it!