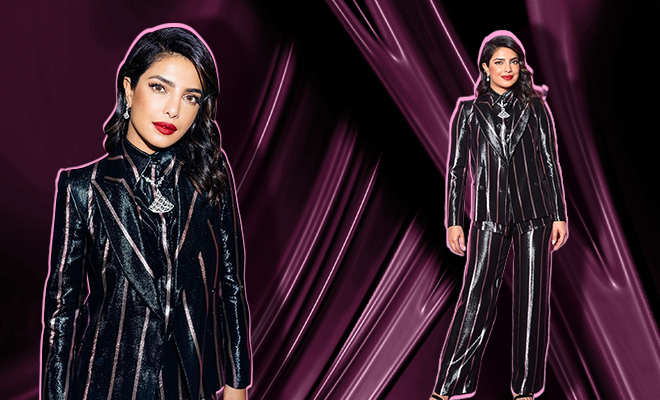 All The Sneaky Details From Priyanka Chopra’s Alberta Ferretti Pantsuit Look. We Love That Strong Lip

While Bollywood’s finest were busy dodging the rain on IIFA night, Priyanka Chopra Joans was on a whole other red carpet serving up looks! The actress was a guest of Bvlgari at the Milan Fashion Week, celebrating Vogue Japan’s 20th anniversary. PeeCee showed up as her usual fabulous self, looking dapper in a metallic pantsuit from Alberta Ferretti. As always, PeeCee has managed to leave little breadcrumbs, delicious details behind for fashion enthusiasts to find. And where does it lead, to fascinating details about her ensemble that are a joy to find!

Priyanka took a step away from her signature bodacious look and opted for a more masculine cut in her suit. She paired the three-piece suit with a Bvlgari high tied necklace and diamond earrings.

Before we get into the details, here’s a fun fact: Priyanka has remained a fan favourite to be cast as the next Catwoman in the DC extended universe. There are literally fan arts and petitions out there to get PeeCee to don the iconic catsuit. Having said that, we think Priyanka herself is putting that energy out in the universe because the suit…is made up of the same fabric as Julie Newmar’s Catwoman from the 1960s Batman series. Called lurex, the fabric is made from synthetic film, onto which a metallic aluminium, silver, or gold layer has been vaporised. This adds the shiny quality to the suit. We have Priyanka already channeling the widely popular comic character.

We are also loving the extended shirt of the suit. Breaking the blazer etiquette the shirt hangs lower than the hem of the jacket, adding character to the look. We are definitely trying this for our pantsuits next!

This next detail will prove how committed Priyanka and Mimi are to creating looks according to the occasion! Adding a sneaky Italian twist to her makeup, PeeCee paid and an ode to the classic beauties of the country. Her makeup artist Vincent Oquendo said, “I wanted to play with texture. I wanted to go with a super matte red lip.” He achieved this feat by enthusiastically powdering her crimson lipstick. He highlighted the f*ck out of those cheekbones though! “I kept her skin really fresh to give it that otherworldly glow”, he elaborated. Smart!

On the work front, Priyanka Chopra’s The Sky Is Pink has garnered rave reviews at the Toronto International Film Festival. The actress is back in the country promoting the film locally and we can’t wait to see her bang on promotional fashion. Meanwhile, let’s take a look at the cast of TSIP enchanting TIFF audiences with their charm and wit!

Don’t Know What Red Or Nude Will Suit You? A Makeup Artist Tells You How To Pick The Perfect Lipstick!