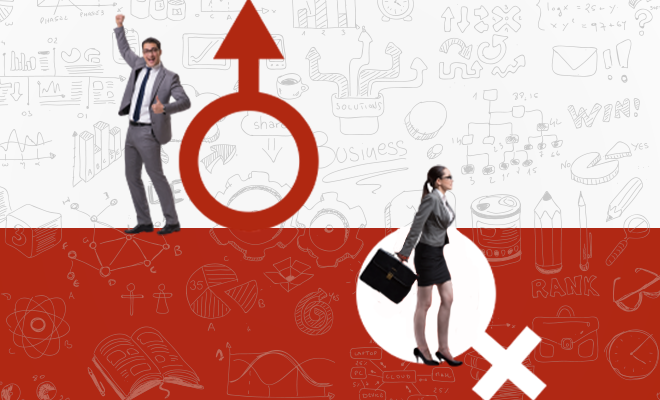 Survey Indicates Women In Finance Have To Ask For Promotion, Men Get Them Without Asking. Why Are We Not Surprised?

Let me point out one of the most common features you’ll find in most Indian households. If a man wants a glass of water, all he has to do is ask for it. That’s irrespective of his age, how free or occupied he is, and how close or far away from the water he is. Of course, he can always get up and fetch it himself. But for the most part, asking is all it takes. As for the women, they usually go and get one for themselves. What’s more, she’ll drink her glass, and on her way back, fetch one for the man too even when he hasn’t asked for it, just in case he’s thirsty. That’s the level of ease that being a man can get ya. Is it surprising then, that in the professional field too, men tend to get things served up to them, but women have to slog and pretty much spell it out that they want something to eventually get it? Believe it, because a recent survey indicates that while women in the finance sector jobs have to ask for a promotion, men get is without having to utter a ‘P’.

A new study conducted in Australia highlighted the institutional gender bias rampant in the finance sector. Although, we won’t be surprised to find that it extends to other corporate and industrial sectors as well. Some 2000 finance industry professionals were surveyed for this study, conducted by Ardea Investment Management and Australian National University in collaboration with industry experts. And it was found that 76% of men were, at least once in their career, offered a promotion without them asking for it. Whereas this transpired only for 57% of women in the field.

According to Bronwen Whiting, a senior lecturer in Applied Statistics at the Australian National University, this study provides “evidence of that culture that things come to men without asking.”

As if we needed any more evidence to that effect. Sigh.

Also Read: Sheryl Sandberg, COO Of Facebook, Advises Young Women To Not Do Their Boyfriend’s Laundry. And Here’s Why

The workplace is quite the battleground for the sexes, and inequality there has always been rampant. Whether it is the wage gap or the gross misunderstanding of the differences between the genders, which often leads to women needing to overstretch themselves to prove they are as good at their jobs as men are.

Take period leaves, for example. There are several factions of the female workforce that are vehemently opposed to period leaves because they find it anti-feminist and patronising. Underlying this argument is the fear that if they address their biological differences, it would automatically become a weakness when pitted against men. In fact, according to data collected by CNBC and SurveyMonkey, 34% of women with under-18 aged kids say they are “very concerned” about taking advantage of flexible work arrangements because it might prevent them from achieving their goals.

A similar travesty occurs then when companies decide who should get promoted to higher positions. And it’s usually not women. The reasons range from an inherent lack of faith in a woman’s capabilities to the belief that her society-assigned gender role will get in the way of her ambition. If the choice is between a male employee whose working would’t be much affected by household responsibilities or who won’t take period leaves and a female employee who will take those leaves, might miss work due to family commitments and even avail a maternity leave, guess which employee will be chosen to get promoted?

In a 2018 report by Visier, a data company, it was highlighted that for the very reasons mentioned above, older women are more likely to get promoted than their male counterparts. It could be because by that age, usually, it is assumed that demands of childcare have decreased, and women can focus more on their work roles.

This Sydney-based research isn’t the only one that highlights this gender bias, which is as often conscious as it is subconscious. In 2019, Lean In and McKinsey & Company reported in their ‘Women In The Workplace’ report that for every 100 men promoted and hired to a managerial position, only 72 women were promoted and hired for the same role.

The Australian study also found instances where women asked fort salary hikes and promotions as often as the men did. And when that happened, this difference in promotion rates was not found. Now you’d say, great then that solves it. Women should just up and ask for promotions instead of waiting around for the employers to hand it to them. What’s the big deal, right?

Sure, the woman could ASK for the promotion. But the moment she has to do that, she has to also prove herself quantitatively with all that she has done in the past. As Lean In co-founder and CEO Rachel Thomas said, “Men are typically hired based on potential and what we believe they can do, while women are typically hired and promoted based on what they’ve already accomplished.”

The same principles apply for salary hike. Ardea’s head of research, Laura Ryan, pointed out “One of the arguments put forward as to why women are paid less is that we are too agreeable. Looks like we are being assertive, but if we are not we definitely miss out. Gender is a strongly significant factor in determining salary.”

The short of it? Push harder, every step of the way. Be more assertive and aggressive. Because aggression is a masculine trait. And while men don’t need to keep their aggression on at all times, by the privilege of being men, women do to prove themselves.

Guess what? The pandemic just made it all worse.

A software company called Qualtrics and theBoardlist conducted a study in August 2020, focusing on gender parity in boardrooms. The sample size comprised 1051 salaried American employees. It was found that 34% of men who were working remotely, with kids at home, received promotions as compared to 9% of women who were working in a similar remote situation. Furthermore, 26% of such male employees said they received a salary hike, while only 13% women could say the same.

I mean, of course, this isn’t surprising again, is it? The soft commerce and service industries being hit harder by the pandemic, the lay-offs likely hit women more strongly than men. But even in sectors like finance and industrial work, female employees had more likely quit their jobs due to being overburdened by household responsibilities that the staying home brought on. From childrearing to domestic chores, juggling it all with the demands of a job (that they were constantly reminded they were so lucky to have during a recession), a lot of women were bogged down with the Double Burden Syndrome.

Also Read: Study Says Women Who Work From Home Suffer From ‘Double Burden Syndrome’ Where Deadlines And Domestic Duties Are Both Their Responsibility

This is likely to have affected their output and performance, making them less valuable employees than their male counterparts. Many women quit their service sector jobs to pursue entrepreneurship, which might be a good thing in the long run. However, there were mostly women who quit high-paying jobs that expected more from them, and downshifted their jobs to ones that let them manage domestic work as well and paid just enough to run their household. What’s more, companies under the guise of downsizing for efficiency or paying slashes salaries, have also managed to ‘get rid of’ female employees. If that isn’t a massive hit to their finally viable lofty career ambitions, I don’t know what is.

What’s worse though is that, as Stacy Francis, president and CEO of Francis Financial of New York, told CNBC, “It is a backwards move for women and it’s not just from a career perspective. It is also from a financial perspective.”

Women who work aren’t just working towards securing their present with financial independence. They’re making moves to secure their future as well, with savings, investments and a sizeable corpus for their retirement. What the pandemic lay-offs have then done is struck hard at their retirement fund. So once again, women will be forced to depend on their spouses or children to support them.

The age old struggle of Equality vs Equity

It’s so easy to proclaim that we’re striving for equality, without understand that without equity there can be no balance. While equality is all about giving everyone the same headstart and opportunities, equity is about fairness and giving people the opportunities according to their strengths and weakness. And thus, bringing people on the same level.

Most companies hire female employees as a show of solidarity with gender equality. But when it comes to acknowledging the inherent differences between men and women, and giving both male and female employees opportunities to grow in accordance with those differences, they fail miserably.

The biggest reason why women do not get as actively promoted as men is the subconscious gender bias that we all carry in ourselves. We don’t want to be called out on it, so we completely shut our eyes to it and pretend that it will go away. Instead, if we just acknowledged it, and worked towards giving men and women customised opportunities according to their capabilities, it would be so much simpler.

As Whiting said, “It can’t all be on women to act differently to fix it.” We must all collectively work towards uplifting women to a level where we can finally say, oh yes, women are equal. to men. And then, then we give them equal opportunities and see who deserve the promotion best.

Hey Men, I’m Not Your ‘Dear’ Just Because I’m A Woman. As Faye D’Souza Said, Be Professional