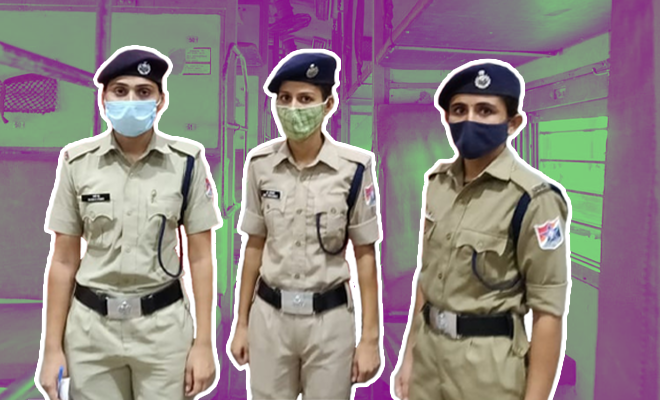 By now, it’s pretty much established that women aren’t safe anywhere. We feel unsafe whether we are in a secluded parking lot, a crowded street or a moving train crammed with thousands of people. I have travelled by train alone only once and during that overnight journey, I finally realised why my parents never allowed me to travel alone at night in a public transport.

There has been a spurt in crimes against women travellers and groping, misbehaving and leering in trains has become so common, the women have grown thick-skinned. But obviously, I am not just going to sit at home or buy a helicopter for myself to commute to places (I am not Kim Kardashian). What I want as a woman is for our public transports to be safer. At least, the Railway Protection Force (RPF) at Hubballi division of South Western Railway is attempting to do that.

The Indian Railways has launched an initiative to create a safe space for women in trains and ensure that women travellers feel safer. The initiative called ‘Meri Saheli’ has a team of women RPF personnels aboard who interact with the women travellers, especially those travelling alone and brief them about the precautions to be taken as a traveller to ensure safety and the RPF Security Helpline No. 182, GRP Security Helpline No. 1512 in case they find themselves in a dicey situation. This is a great move.

Accommodation details of women passengers( esp of those traveling alone) collected by lady RPF teams of @rpfsrly , passed on to RPF officials on duty at stations enroute, ensuring their safety throughout journey pic.twitter.com/7gl7h0KBit

Also Read: Government Launches An SOS Safety App For Women. But Where Does That Leave Women Who Don’t Own Smartphones?

The campaign was flagged off on 26 October 2020 and a team of young female RPF staff was appointed to assist and counsel women passengers from originating station to the destination station. The berth number and journey details of women travelling alone would also be recorded by the staff to ensure maximum security. The staff would visit all coaches, lady coaches and passenger coaches, to interact with all women aboard. Plus, at the destination station, feedback on the railway security would also be taken from the passengers.

The statement by the national transporter said, “The platform duty RPF personnel at the stopping stations en-route keep unobtrusive watch over the coaches concerned and berths and if the need arises, interact with the women passengers.” “ It further adds, “RPF teams at the destination collect the feedback from the identified lady passengers. The feedback is then analysed and corrective action, if any, is taken. If some distress call comes from a train covered under the ‘Meri Saheli’ initiative, the disposal of the call is monitored at the level of senior officers.”

This comes at a time when festive season is around and there is usually an upsurge in the number of travellers in trains. Women who travel alone have no option than to carry safety tools in bags and paper spray handy, contacts on speed dial and a panic button app on phone. But let’s be real. That is never enough to make us feel safer and the fear of being attacked or molested is always there. We live in times where we can’t even completely trust a male police staff, because let’s face it there have been cases where protectors have turned predators. It’s a disturbing fact. Having a women staff onboard does help a great extent and the title of the initiative ‘Meri Saheli’ sits apt here.

Indian Railways has launched “Meri Saheli” initiative for focused action on security of women with an objective to provide safety & security to lady passengers travelling by trains for their entire journey.https://t.co/BxMPUwlJvV pic.twitter.com/8EDzHFhBRH

It was started as a pilot project in September this year in South Eastern Railway but later extended to all zones. This security service in railways should be adopted by all stations and trains across nation, especially where crimes against women in public transport are rampant. Every woman has or will experience some kind of sexual harassment in a public transport and that’s the reason why women are scared to travel solo, especially at night.

Studies show that women are 10% more likely to feel unsafe in trains than men. While the fear of men would mostly be his luggage getting stolen and him getting robbed, the fear of a woman is always a man. Initiatives like these can help make travelling safer for us. It’s about time we get to travel safely without the fear of being attacked by a pervert lurking at all times.