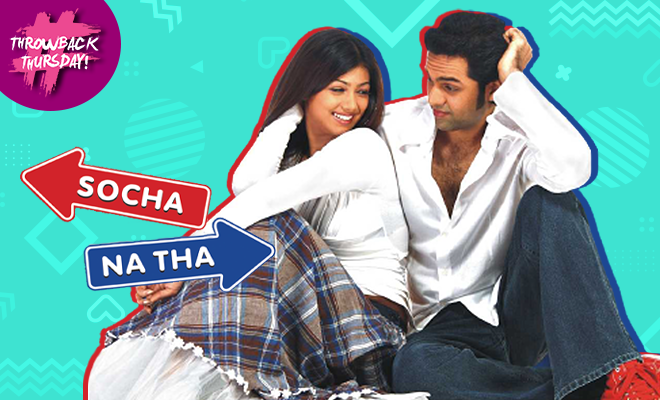 What is loyalty? Is it something that comes naturally or is it something that you have to work on? For me, it is an amalgamation of both. When you are in a long-term relationship, the novelty wears off, and soon, that mindless passion is replaced by mature, peaceful love. And yet, as humans we are attracted to newness and spice, which often comes in the form of new connections. Abhay Deol and Ayesha Takia starrer Socha Na Tha is a movie that explores complicated human emotions and relationships.

In movies like these, I really wonder how easy it is to call a newfound attraction love and discard a solid-something you had with someone for years. Socha Na Tha is about a guy, Viren (Abhay Deol), who seems very sure of what he wants, until he is not. He is like the more annoying version of millennials, or did I take it a bit too far? You know it was probably the time where youngsters were still tasting freedom but not confidently so. They still had to portray a completely different image at home because families don’t evolve as easily.

Viren was like that kid who found freedom and two candies and couldn’t pick one. Just for the sake of it, and to please his conservative family, he agrees to meet a girl, Aditi (Ayesha Takia) in an arranged marriage setup. They hit it off well but in a platonic way, or so the dumbfucks believe. They mutually agree that he will reject her the very same night but that ends up creating a war between the two families, especially because Viren was caught holding Aditi’s hand.

Amidst all this chaos, Viren is trying really hard to propose marriage to his girlfriend of three years, Karen. Now the filmmakers really tried hard to show that Karen is slightly bitchy and cold but she was just a confident, independent woman who knew her worth. Plus, they were together for three years. The way she would behave with him would obviously be with more authority than a girl he met days ago.

Yet, Viren’s ego is brushed only by Aditi’s “easy-going” nature. And just because he felt no obligation towards her, he could share things with her. Well, whose fault is it if Viren’s communication skills with Karen were poor and he often choses dishonesty instead of saying the truth? What is the guarantee that when Aditi becomes his wife, he will not be dishonest with her?

Coming to the loyalty bit in Socha Na Tha, I just feel you need to know your boundaries when you are in a relationship. Back then, people had no understanding of emotional infidelity and believed they are doing something wrong only if they had sex. But what business does Viren leaving his girlfriend alone in the room all night and going with a random girl to explore the hills? Like really, imagine your boyfriend doing that.

The thing is, he was putting all that effort and time into bonding with someone else. In Goa, Viren is dancing with Aditi while his girlfriend Karen is completely forgotten. Partners are not like clothes that you get a new dress and you discard an old one. Of course, there will be attraction and excitement. But it depends on you to not act on it. If he hadn’t spent so much time with Aditi, they would not have bonded.

Just as in Socha Na Tha, even in the movie Hasee Toh Phasee, this man leaves his girlfriend of seven years for another woman. I don’t understand why you can’t just respect boundaries and draw the line for how much involvement you can have with another woman.

Of course, Viren breaks Karen’s heart and she still chooses to forgive him. In fact, all throughout, she was still trying to work things out with him. And this was a woman desired by so many men and definitely out of Viren’s league. Yet, she chose him and she chose to be loyal to him.

Apart from this angle, the movie explored the generation gap between parents and youngsters. Sometimes, elders can get overpowering with restrictions, but thankfully, even our parents have evolved since then.

Even when it comes to arranged marriages, Socha Na Tha’s portrayal of it will take you back to the reason why people hated it. Aditi had to doll up, be unusually coy, and serve. She almost didn’t have the right to say no to the guy and only the guy could reject the girl. Thankfully, today arranged marriages in modern families aren’t like this. Women and men have little interference from their families and both have the right to reject.

ALSO READ: Throwback Thursday: Fashion Is Juicy But Full Of Stereotypes And Sexism

I understand, back then, it would have been a bold move to show what youngsters really want. But sometimes, we don’t know what we want. And it’s okay to get confused, but a little honesty and consideration can save people from getting hurt. In Socha Na Tha, I loved Viren and Aditi’s connection. But Viren, what you did to Karen was wrong.

ALSO READ: Throwback Thursday: Kya Kehna’s Take On Pre-Marital Sex And Out Of Wedlock Pregnancy Is Relevant Even Today