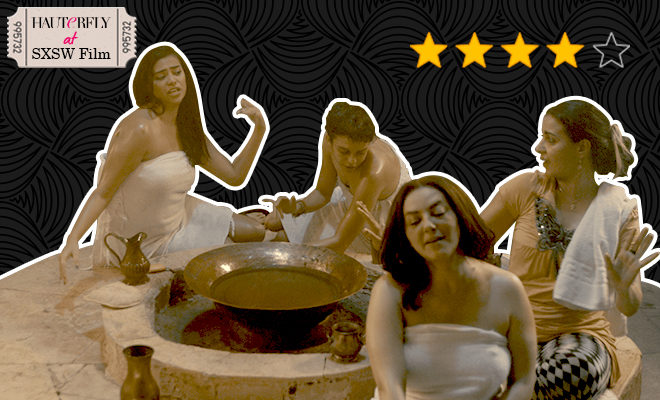 There are some films that you already know are going to be a hard watch but you know you cannot ignore them. Trapped, by Manal Khaled and written by Rasha Azab, was one such film I came across when scanning the SXSW Film Festival 2021 lineup. The film is set during the January 25th Revolution in Egypt, in 2011, when the people of Egypt revolted against years of oppression and inequality. Trapped focuses on the stories of seven women during the first few days of the revolution, which are inspired by true events, some of which were experienced by the writer and director of the film.

The cast includes Coroline Khalil, Reem Hegab, Osama Abo El Ata, Ne’ma Mohsen, Mona Mokhtar, and Sara’a Jebel. The cinematography is by Zbigniew Rybczynski and the film is edited by Rania Montase. The film was the only Arab entry at the SXSW Film Festival.

Trapped is the story of women smack in the middle of civil unrest, but trapped because of their gender more than their political views

The film has multiple stories, which are only connected by the scenes of unrest and the background conversations, noises, and news reports from radio and television, all happening amidst the revolution on the streets of Egypt. We meet the first woman, a rebel, who enters a mobile repair store in the middle of the night, seeking refuge from the crowd outside and the cops patrolling, trying to round up any revolutionaries and teach them a lesson. In another story, a middle-aged woman is separated from her college-student son, while they’re both on the run from the police they pissed off while protesting. And in the final story, we meet two women, one a tight, seemingly prude divorcee and another an out-and-out short hair sporting, androgynous-dressing, cigarette smoking rebel, as they’re both caught and dragged by the cops into a bathhouse (hammam), doubling up as a prison.

In each of the stories, these women meet both, oppressors and allies. But how do they figure out that these people are allies is a kind of a slow procedure. They’re hesitant at first, almost rigidly untrusting, because as women, our first instinct is to not trust anyone. How could we, after all that we’ve seen? We hear how the policemen talk about these women protesters, and I am sure it is the same across the globe—“slut”, “whore,” “characterless,” “needs a man to show her her place….”

However, eventually, through a prolonged conversation (not always in words), they find a way to trust a little, and let their guard down. You might think it’s almost poetic and nice, how they’ve managed to find this one moment of peace, friendship, or compassion amidst such a tense situation. You think, “Oh, they’re going to be okay.”

But then, it hits you, it really is not over, is it? It’s not okay. These women are trapped, not just in enclosed, almost claustrophobic places but in a claustrophobic existence. Even if, by some miracle they manage to escape this entrapment, they’ll just be going out into a society that wants to punish them, bind them because of their womanhood. Their government, against which they are rebelling, might also get overthrown. But what about the mindset of the people they have to live with? They’re still the bars that build the cage in which these women are trapped.

Also Read: Women Rip Misogyny A New One With #RippedJeansTwitter After Uttarakhand CM’s Remark. We Call That Sending A Message!

Trapped is more about showing than telling, which is mostly effective but not always

The summary of Trapped states, “Seven women are trapped in enclosed, stifling spaces. The streets are erupting; homes, shops and alleyways lie anxiously in wait. Communications are shut down, answers offered only through TV screens. Our characters attempt to escape their current confines, perhaps desperately, perhaps half-heartedly. In the end, they are all forced to adapt, caught up in their own individual, extraordinary battles.”

For the most part, Trapped is effective in making you, the audience, feel the entrapment experienced by these women. One woman is in a closed storeroom. A young girl is locked in by her mother, while the stranger she starts talking to through the door is locked in the building by cops who wanted to teach her a lesson. Two women revolutionaries are imprisoned in a bathhouse, but little do they know, the woman running the bathhouse, her sole female employee, and her customer, they’re all imprisoned from pursuing their own hopes, dreams, interests and independence in some way or the other.

I love how the makers have also shown physical escape paths or hatches in their settings, to indicate that there is a small window that they can seize to escape their fate. But often, the fear of the unknown or perhaps the knowledge of what might lie beyond that escape is what holds these women back from escaping their cages.

The silent moments are the most poignant and impactful, unless you count the final scene where the women in the bathhouse are bonding over a shared song. However, there were times, particularly the transitions between the stories, that felt a little vague and in the beginning, left me confused as to what might be happening. Not everyone might get the subtle nuance of that transition.

Verdict: Trapped is a grim ode to women’s struggle for liberation, but it ought to make you angry

I watched Trapped at a time when I had just returned to the world of online dating. And maybe it was my charged up brain, still reeling from the impact of the film, but reading ’Apolitical’ in the dating bios of men’s profiles irked me a lot. Look at the world around you and tell me again, how can you choose to remain untouched, unperturbed by what’s happening! Especially as a man, which instantly accords you with a layer of protection, and the privilege of your voice being heard! Watching Manal Khaled’s Trapped brought to further prominence the role that women play and have been playing for eons now, in political and cultural revolutions. And mind you, it is fucking hard. Because we’re carrying the crushing weight of patriarchy on our backs while we fight for these causes.

In fact, yes, Trapped ought to make you angry. Just looks at these women, being called ‘liberandus’ and ‘whores’ and ‘sluts’, assaulted and trolled, their mind and body broken, and still showing up. And you know what, they might just end up liberating minds and thoughts and entire nations. But what about their freedom? Who’s going to break the shackles of misogyny and patriarchal oppression that bring them down and keep them trapped?

This review is part of our Hauterfly At SXSW coverage.