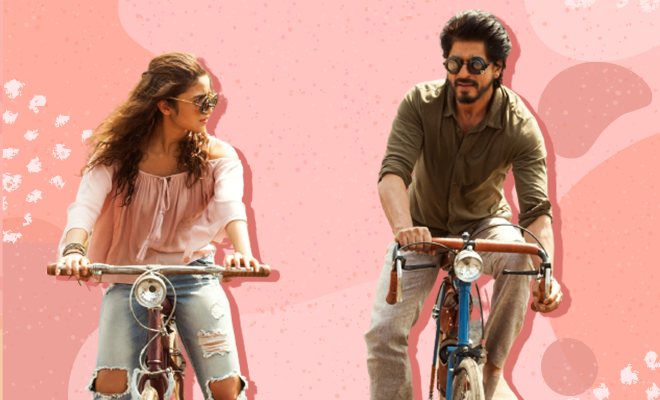 There’s something about Shah Rukh Khan, isn’t it? It took me a while to grasp it myself. Is it his dimples? Or that ready wit that is born of being well read and attentive to the things around him? Why are no women immune to his charm when he spreads his arms and beckons you to come “Aur paas…? You like him when he is humble and you love him despite his frequent vanity. And even when he keeps delivering movies that don’t exactly live up to his title of the Baadshah of Bollywood, you still want to give him another chance. The magnetism of SRK transcends age, geographical boundaries and even time. You could watch DDLJ and fall in love with the cute Raj just as easily as you could watch Raees and drool over the sexy, kohl-rimmed stare he’d fix you with. He has a way of making you feel through the screen that he is only talking to you. It may be his birthday today, but for us, his fans, SRK is the gift that keeps on giving.

Don’t know when my passion became my purpose and then turned into my profession. Thank u all for so many years of allowing me to entertain you. More than my professionalism I believe my passionalism will see me through many more years of service to all of you. 28 years and counting… and thank u @gaurikhan for capturing this moment.

But today, I thought that I, a die-hard SRK loyalist, would ask for something more from my King, as he turns 54 and gets ready to emerge out of his self-imposed acting sabbatical. We’re all waiting to see what movies and what kind of characters he plans to take on next. Luckily, in Bollywood, if you’re man you do get the pick of the lot. Will he dabble into OTT as an actor now? Could we see him in another period drama? Will he do more voice acting? Can SRK still romance on screen convincingly?

I have a request. You see, Bollywood has only just gotten close to cracking the female ally in its movies. And to have one of the Khans step into those shoes would be absolutely spiffy. If you ask me, I would stake my bets hands down on birthday boy Shah Rukh Khan.

Now I know, you’ll wonder on what basis do I get to make these demands. It’s not like SRK’s into the whole social message brand of cinema like an Akshay Kumar or an Ayushmann Khurrana. Nor is he a very vocal advocate for feminist causes as such. I mean, it may have come up in an interview or two, and yes, he has always been the perfect gentleman when he talks about his female costars and the women in his life. But wouldn’t it be hard for him to relinquish the limelight that he completely owns and let his female costar shine (like in that Lux ad)? I get it, this could feel like a total out-of-the-blue proposition. And yet, hear me out.

I’ve often heard people say that the Khans’ territories are rather divided. Aamir Khan is the thinking man’s actor or something like that. Salman Khan is the bhaijaan of the masses, and doesn’t bode too well for the intellectuals. Saif Ali Khan, I believe, has transcended this basic comparison and evolved with the times, and he now belongs to all of us. Which leaves SRK, who seems to be living off of this enduring thrall he has cast on us 90s kids, occasionally helped by his performances in movies like Dear Zindagi or Raees, or a rewatch of Swades, Chak De! India and Baadshah. They remind us that SRK can be so much more.

Also Read: Swara Bhasker Agrees Raj In DDLJ Was Problematic, But Insists We Need To “Learn And Change.” Right You Are, Señorita!

If you keep aside his obvious earlier successes, some of Shah Rukh Khan’s best films in the past two decades have been movies with a strong female presence—Chak De! India, Om Shanti Om, Dear Zindagi, Rab Ne Bana Di Jodi, Swades…. One of the biggest reasons why the new lot of filmmakers are not chasing big actors for their movies is because they know that a superstar could overshadow the script. None more than an SRK would. But the beauty of these above-mentioned movies has been the utter lack of this expected overshadowing. We knew this was Shah Rukh, and we detected the same charm and dynamism he’s dripping in every movie. And yet, he was rooted firmly into his character, without overshadowing his leading ladies, and he gave us performances that we would remember. It felt like the right balance of massy and intellectual.

SRK might not have been the quintessential female ally we see now, say in a Pankaj Tripathi or a Kumud Mishra. But the message he was trying to send was delivered to a much larger audience because of his stardom. And right now, that penetration of the messaging into the remote corners of the country is much needed.

Come to think of it, it would almost be a natural progression for Shah Rukh Khan to step into the shoes of a female ally on screen. It’s just this vibe he gives off, you know? When he talks about women… like he could bring the perfect mix of feminism and chivalry to you without sounding too pompous, preachy or ‘token’ about it. I’ve always thought that SRK’s comic timing is rather incredible (Have you seen his AIB episode?) and not enough has been done to showcase his real-life wit on screen. Imagine channelling all of that wit and sarcasm, the knowledge and savviness that he has, and superstardom to drive home the point of women empowerment. I think it would be quite the combo.

This thought has been swirling in my mind ever since I realised how much Shah Rukh Khan appeals to people. On random days, I’ve opened Instagram to find my girl and guy friends alike posting how much they miss SRK, and aching for a rewatch of Main Hoon Na or Kal Ho Na Ho. I noticed an upswing in these mentions when this one video dropped, of SRK’s interview at Davos in 2018, and I saw people talking about it. It wasn’t all positive. In fact, you could call it the most diplomatic speech ever. It would give you the impression that Shah Rukh Khan was acknowledging all the problems like unequal pay and gender disparity that existed in Bollywood and was endorsing women who accepted it all and “did not crib,” knowing that their male costar was taking all the credit for the success.

“I don’t spend time in the company of men.” Shah Rukh Khan on how women have shaped his life…

I was one of many Shah Rukh Khan fangirls who, despite our love for the man, called out the lack of a clear stance here. You cannot go on to say that you think women are wonderful creatures, and you love having been raised by and surrounded by the most strong, incredible women, and then say that you admire their tolerance. Especially not at a time when this very tolerance is breaking all over the world, and erupting into a movement that demands women to get angry and speak up. If you think your female costar is all that, you better take a pay cut and make sure she gets her dues, not just when the title credits role and you get her name to appear before yours. That’s token feminism, and we’ve got enough of that, don’t we?

You’d think this video would make me like him less, or discourage the idea that we need Shah Rukh Khan to play more characters that are female allies on screen. On the contrary, I think the perfect way for SRK to finally make a difference for and pay tribute to all the amazing women he is talking about is to take up roles that advocate for women. He has the star power, his own production house, and the clout to bring together projects that can tell women’s stories with all the flair and without budget caps. If he stars in them, that’s even better because people will flock to the theatres to watch him. Even if one or two films tank, would it matter? It hasn’t so far, has it? Zero flunked and we still love SRK. Besides, I have a feeling it might just click.

Nobody can deny that SRK has a way with the ladies both on and off screen. It’s inexplicable, but just the way he looks at them, like he’s watching some secret of the cosmos unfold and he is mesmerised by the incredible creatures that women are…. Imagine selling that same viewpoint with a message, I mean, the man has managed to made Bollywood-endorsed sexist tropes look good. The Rahuls and Rajs that he has been playing were okay in the 90s. But as Swara Bhasker had pointed out on Twitter, Raj was flawed and we could all learn and do better. It’s a perfect way for SRK to transition into the Bollywood of today.

I’d love to see Shah Rukh Khan play a professor leading an all-woman Money Heist. Maybe a This Is Us version, where SRK steps into Milo Ventimiglia or Sterling K. Brown’s shoes, playing a wonderful husband who shares the load and a doting father who rallies for his little girls.

Or OMG! A Schitt’s Creek version of Mohan Bhargava, who has to move to a remote Indian town after losing his riches, and becomes this reluctant but passionate crusader for women’s equality in rural India. See SRK could sell that, and he could do it with style and wit. I’d watch it.

So, dear Shah Rukh Khan, happy birthday, my King. I hope you consider this proposition and show us what you’ve got. Sincerely, a señorita who has hope that humare bade-bade desh mein this chhoti chhoti baat gets amplified via you.