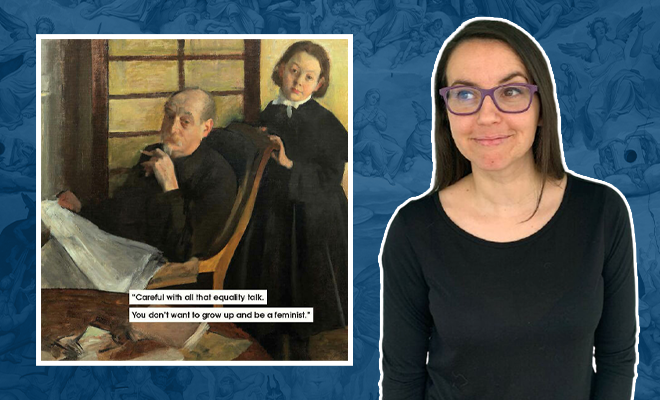 You know while a majority of men don’t offer me much to envy, I really am jealous of the unity they share. Criticise one category of men and all will jump in to say how not all men are like that. I get surprised rather…if everyone just disowns this category and claims that it is not the majority – how come there are so many bad ones? Are they like cockroaches that you believe don’t exist in your house? And yet if you go to your kitchen in the middle of the night, there is a whole party out there. Because comedy writer Nicole Tersigni’s art around toxic men has gone viral possibly since it touched the internet!

Her inspiration came from her own frustrating experiences with men who missed no opportunity to mansplain. “I was fed up with the way men regularly explain my own jokes to me, so I decided to make a quick joke about it,” Tersigni told Bored Panda. “I did an image search for ‘woman surrounded by men’ because that’s how that moment feels sometimes, and one of the results was a beautiful painting of a woman holding her bare boob with men crowded around her. I paired it with the caption ‘maybe if I take my tit out, they’ll stop explaining my own joke to me.’ And it eventually turned into a thread with similar classic paintings and modern captions, and people really connected with it,” she added. She titled it Men To Avoid In Art and Life.

The Adventures of Mr. Ed and Captain Moose Knuckle

Her art became so popular – because of the number of women that could relate to it – that it’s now a book! Literary agent Rachel Sussman contacted Nicole Tersigni and the book went on sale in August and got sold out within 48 hours!

Explaining how it’s done (so the mansplainers can back off now), Tersigni wrote, “The paintings come first, and I write the joke around them,” Tersigni explained. “I think the funniest jokes take details from what’s happening in the painting, so I like to start there and see what I think is happening based on their faces or the scenery,” she added.

But seriously, as I scrolled through her art I noticed how all these paintings have women staring blankly. Like I would have the face when I really want to ask the neighborhood aunty to mind her own business but I have to be courteous instead. Or when a man is speaking such bullshit that it’s either a ‘straight face’ look or ‘punch his face’ one.

And the rope is actually overcooked spaghetti. Good luck!

So it made me wonder, and I wish there was a way to find out – were all these women just swallowing their pride and smiling? You know like that video in which the wife slaps her fast asleep husband hard and then when he wakes up, comforts him? I believe back then women didn’t have the choice to be sarcastic and speak their minds. I bet they looked at each other’s expressions and immediately got it! They would probably then gather and gulp down some wine and talk about how foolish the men are to mansplain them! And it’s not just the mansplainers. She takes a dig at men who have too many opinions on what a woman should or shouldn’t do and basically attack our autonomy.

Nicole Tersigni affirms, “You’d be surprised at how many classic paintings have women directing blank looks at men.” She added how so many women could connect, “I’ve had so many people sharing their own stories and experiences with me, and telling me how thankful they are for the book…It’s nice to be able to laugh together about something that’s normally very frustrating.”

I have mentioned in a previous article how this guy used to mansplain to me. He once told me about this “organization called the United Nations” and I was so surprised. My jaw dropped several floors down and I just didn’t know how can someone think an educated person doesn’t know of its existence? Forget current affairs, it was there in our Civics books!

Recently, this well-intentioned guy refused to accept my directions when I was assigned to handle the maps. I kept telling him to take a U-turn and he kept going straight because he thought he is better at navigating maps. But believe me, nobody can navigate using maps better than a geographically challenged individual, that is, me! I gave up because I knew the time will do its job and it did when we reached a dead end and he had to take a u-turn.

And going by the paintings, this is not a new phenomenon! Men have been wanting to seem smarter since forever. They want to be fixing their women, teaching them, and holding higher intelligence. It’s an ego boost that they seem to be confusing with oxygen. But can someone let them know that it’s really not that vital for their survival and they can let it go?

ALSO READ: Can We Talk About The New ‘Men Will Be Men’ Ads? Because They’re Actually Sexist AF

You weren’t “Friend Zoned”, she just thought you were her friend. #MenToAvoid

I am glad at least we can have a laugh about it and call men out for being that way. Given how I wear my feelings on my face, I bet I wouldn’t have been able to hide displeasure. For women who swallowed their pride back then, while we have evolved, the men still haven’t – in case, they needed an update! Meanwhile, we have Nicole Tersigni’s series to laugh over the tragedies while it also helps wake people to reality!