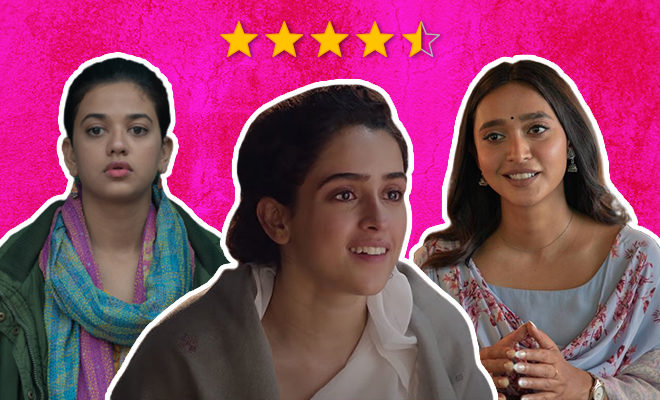 Usually when a new film or series trailer drops, we at Hauterfly discuss and write about what we thought of it, what we liked or disliked, and what are expectations from the film or series are. For Pagglait, I did the same, and I had a feeling that it would follow in the footsteps of another film about how our Indian society handles grief, Ramprasad Ki Tehrvi. Heck, even the house they’ve shown in the film bears an unmissable resemblance to the one in Seema Pahwa’s film. However, writer and director Umesh Bist managed to surprise me with all the directions his film went into, and where it finally made its final stand. A Netflix original, Paggalit stars Sanya Malhotra, alongside a bevy of talented actors—Ashutosh Rana, Sheeba Chaddha, Raghubir Yadav, Natasha Rastogi, Rajesh Tailang, Shruti Sharma, Jameel Khan, Meghna Malik, Ananya Khare, Yamini Singh, Bhupesh Pandya, Chetan Sharma, Aasif Khan, Nakul Roshan Sahdev, Ashlesha Thakur, Sachin Chaudhary and Saroj Singh, with special appearances by Sayani Gupta and Sharib Hashmi.

The film is set in Lucknow. Sandhya (Sanya Malhotra) has been married only five months before her husband Astik’s demise. As the relatives and mourners begin arriving, including her own parents and her friend Nazia, Sandhya is expected to be a sobbing mess. Only, she isn’t. She is claustrophobic, hungry and just wants a bottle of Pepsi. And an explanation for why her waterworks aren’t starting. Others think she’s crazy. But we know it’s because she barely even knows what kind of a person her husband was.

Sandhya’s mother and BFF are worried about her. Meanwhile, Astik’s parents, struggling with the worst kind of loss a parent can go through, have not one spare minute to cry because there are rituals to do, arrangements to be made, and vendors to be paid. Not to mention, there are distant relatives whose egos have to be pampered, and a colossal pressure mounting about their survival, now that the sole earning member of the family is gone. Their second son, who preformed the last rites, has been made to shave his head and live like an ascetic for the mourning period of 13 days.

As the situation languishingly unfolds, Sandhya discovering a secret about her husband and becoming the beneficiary of his INR 50 lakh insurance policy puts her on an eye-opening path of self discovery and awakening.

Also Read: 5 Thoughts We Had About The Pagglait Trailer: Here For Sanya Malhotra, Farting Dadi And ‘Crazy’ Wise Women!

Pagglait tackles major themes of death, grief and awakening as deftly as it does the mundane realities of life that goes on

When they say the deceased’s soul is present in the house for 13 days, it is an allegory about how the grief of their passing is potent for those two weeks. And when they finally perform the puja on the 13th day, the soul is said to have departed, which is how we cajole our own mind to find peace that they are “in a better place now”, perhaps ready to be reborn into another body.

Running parallel to her husband’s afterlife journey is Sandhya’s journey of self-discovery. She goes from being a young widow who feels no grief, to learning about her husband more in those few days than she did in the five months they were married. She grows from feeling indifferent to feeling curious to getting mad at him for his transgressions towards her, and finally, during a ritual on the 11th day, she finally forgives him.

What’s brilliant about Pagglait is that we never know who Astik, the character whose death is the framing device of this entire film, really is. No photos to put a face to him, no flashbacks to show you his life. Nothing. We discover things about him only through the eyes of the people who knew him—a responsible son, good at his job, meticulously organised, a romantic on text. And in that respect, we’re no different than Sandhya. And it’s why her journey resonates with us so much. Both of us missed on really knowing a person, and now it is too late. It also presents us with a choice of how we would like to remember this person as.

Pagglait also deals with the inconsequential realities of our daily routines that never stop, even though it feels like life has stopped because we lost a loved one. Sandhya is constantly hungry, even when she is finally crying. The chain-smoking brother and alcoholic chacha can’t keep away from their vices. The sisters-in-law cannot stop their gossiping and taunting, nor can the pompous son-in-law quit showing off his Shakespeare knowledge. Even the doorbell has to keep ringing with an item song. And the bed-ridden matriarch’s daily routine of food, physio exercises and digestive issues also go on. There are bills to be tallied, errands to be run, worries about home loan repayment, and the deceased, who up until a few days ago was a living-breathing beloved person is now reduced to an urn of ashes, and needs a receipt for identification.

Death is as much a beginning as it can be an end. And life indeed does go on, no matter how close you were to the person who has passed. In fact, in every religion or community, there are set rituals and customs to be performed that are designed in a way to bring people together and engage in activities that both distract them from unbearable pain of loss as well as help them deal with it.

But Pagglait makes you question if, in today’s superficial world, these traditions still have a therapeutic effect? Like, sure, maybe sharing your pain with your extended family is helpful.  But this is also a time when people are vulnerable and it is sickening to see outsiders take advantage of the situation for their own gain, or to impose their own superiority. Maybe funerals are better off being intimate then? Maybe these customs force people to conform to certain acceptable expressions of grief. And anything other than that is deemed crazy.

The film indeed surprised me with Sandhya’s arc. The trailer had me thinking she’ll pull a Rani à la Queen or something. But instead I love how they let Sandhya remain the second-most ambiguous character (after Astik), let us and the other characters make assumptions about what she’d do now that she was single and rich, and then shatter all of those assumptions because she chose to do something heartwarming. It was a very refreshing take. That being said, I dock half a point because, one, I thought something felt inadequate in the moment of her epic self-actualisation. It was a bit subtle for my taste. And two, I wish there was more for Sharib Hashmi and Rajesh Tailang to do.

And that serves to make some very important points about how the society needs to change how it thinks about its women. For starters, arranged marriages need to evolve and shouldn’t pressure men and women to get married to total strangers for the sake of their families. And educating women and making them financially independent is crucial, so that they never have to be dependent on men for their life, in any way, as proved by Sayani Gupta’s brief role.

No, women don’t need to express grief in ‘expected’ ways only—crying loudly, beating their chest, breaking their bangles and wearing white all the time. No, women are bechari, not if you educate them and let them make their own decisions instead of smothering them. And yes, a woman can be in an unhappy marriage but doesn’t always have to hate or have a strained relationship with her in-laws. I loved Sandhya’s bond with the Grandma-who-farts (that’s what I am going to call her and she is one of my favourite characters in the film!). And I like how her own parents are stifling and calculating while her in-laws, despite being traditional and the same generation as her parents, are far more liberal where it really matters.

Also Read: SXSW “I’m Fine (Thanks For Asking)” Review: A Heartwarming Film About Skating Through The Pandemic On Hope

I love how Pagglait looks, feels, and definitely the way it sounds

I like that Pagglait feels subtle and gentle, and doesn’t seem to be in a rush to tell its story. And I’ve seen this kind of cinematography in most films that deal with such funeral settings. It’s almost like gently breezing thought the life of these characters in such delicate times. I loved the house of Sayani Gupta’s character, more so because it was so open and airy compared to Sandhya’s (Sanya Malhotra) room, which was truly claustrophobic and so very unsure of who the person living their was.

This is also the debut of Arijit Singh, the music composer, and I think he does a great job at elevating the narrative with his music. The Pagglait title track by Raftaar is pretty good too.

Sanya Malhotra reigns in her unmatched quirkiness, ably supported by the rest of cast

I like watching Sanya Malhotra on screen. She always seems to crackle with this quirky energy like you don’t know what she’s going to do next. And that works so well with her character Sandhya. She delivers those simple lines laden with profound revelations brilliantly.

Films around the macabre make for a good flex of dark comedy. And when you’ve got such an ensemble cast, that humour becomes a cakewalk. While Ashutosh Rana and Sheeba Chaddha play their heart wrenching parts well, the others, from Raghubir Yadav, to Aasif Khan, Yamini Singh, Jameel Khan and Chetan Sharma do a fine job of delivering the humour.

As I mentioned before, Pagglait implores us to change our mindset but doesn’t necessarily try to present solutions or solve everything for us. It doesn’t preach a better way, or make any particular character a bad person or any particular tradition a social evil. It merely says that death can serve as an eye opener, but maybe we don’t always have to wait for things to get that serious before taking control of our lives.

And finally, it is a major call for death of conformation—to society’s notions for women, for expressing grief and for familial dynamics that are too claustrophobic. What happens if you don’t conform to society’s expectations? They’ll call you crazy? Well, let them. You do you, boo.

Pagglait is one of those easy-to-watch and digest films with good performances that will leave your heart touched and all warm, and your thoughts awakened to new possibilities. You’d be crazy to miss it.

Pagglait is streaming on Netflix.