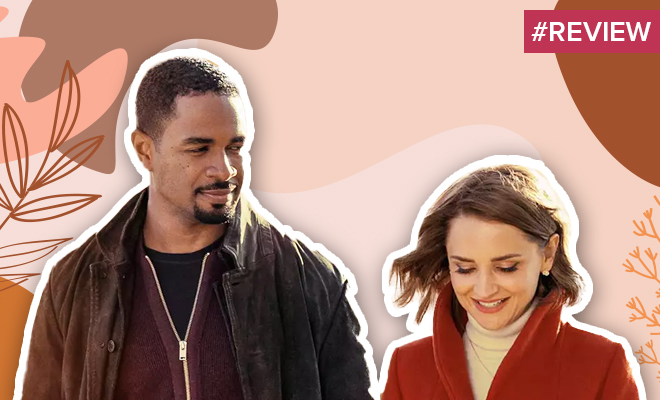 Love, Guaranteed: Online Dating May Suck But Can We Stop Showing Charming Women As Rare?

We all have those days when we want to simply watch a light, easy and average movie that can play on TV while you are engrossed in a flirting text session with your latest match. Or after a hectic day, all you want to do is sit on the couch in your comfiest PJs watching a movie that doesn’t really require you to utilise too much mental space. Netflix’s Love, Guaranteed is that movie. There is literally no struggle in the film, except trying to find answers to some mind-boggling questions. Why did he spend so much money on dates? Does he live in psychoville? Who are these unrealistically nice people? How many surgeries do you need to become as hot as Nick’s ex-fiancee? Of course, I couldn’t find answers to any of these but well, life goes on.

The reason I decided to watch Love, Guaranteed yesterday is that a) I was sick and needed something chill and b) I was curious about their take on online dating. It did satisfy my purpose but will I watch it ever again? Nope. The story revolves around Susan (Rachael Leigh Cook) and her client Nick’s (Damon Wayans Jr.) love story, that they didn’t expect to happen but literally everyone else saw it coming. Susan is a civil litigations lawyer who is so kind and charitable, it has made her poor. She drives around in a broken car, picks up trash and throws it in the bin, and has no time to be slutty whatsoever. Nick is a guy who wants to sue a dating site Love, Guaranteed because he found no love in there, even after going on a little less than 1000 dates.

Nick Evans keeps a record of every girl he went on a date with through the app and even names them which sounds like the titles of Friends’ episodes, as pointed out by Susan. He goes on dates over breakfast, lunch and dinner – almost like he is in a hurry to get to the 1000-mark. I would say he sounds like a dodgy guy and Susan finds that he is actually an upstanding member of the society. He does voluntary PT in a rehab for the old, treats his dates well, and is the poster boy for honesty. Clearly, there is nothing wrong with this God-sent, charming and rich guy. Or so are we forced to believe.

Is online dating actually that bad?

Yes, modern dating trends are alarming and I don’t understand how pathetic you have to be to actually ghost someone. How do you keep a date hanging at a restaurant alone without even having the courtesy to cancel? But if you tell me that a guy met with 1000 women and all of them were major disasters, I won’t buy that. What town do you live in and how is the population so fucked up? Is there a pandemic we are not aware of?

I have tried online dating myself and I met some really cool (and hot!) guys there. We got along well, the dates were fun and they were sharp, intelligent funny peeps. I understand most people turn to online dating to find quickies in their areas or just to ward off loneliness after a bad breakup. Almost everyone has the same story – how they broke up a while ago and they just don’t want anything serious. And yet, there have been stories of people who found love. Nick’s stance was so cynical that you will not find love on an app. It’s possible. And if not, you can always find good sex. An online dating app isn’t a party where all creeps go to feel normal.

This is low-key sexist

While we are all like aww, look at him giving her a mind-blowing kiss on the forehead, can we really talk about how this movie reinforces female competition? Like you don’t have to pull down a thousand women to show one woman in a good light. You don’t have to show a nice, sensible, kind woman to be a rare phenomenon. She nailed a meeting as a total girl boss and Nick goes like woah, I haven’t seen any woman like that before. Are you kidding me? Most women I know are really cool, independent and sassy. Susan is not an exception. Is it that hard to believe that women can be funny, ambitious and…normal? I would not be impressed with a guy who thinks I am a rarity.

So there was nothing wrong with Nick?

Bill Jones, Love, Guaranteed’s lawyer says in defense of the app that it guarantees love to those seeking it, genuinely. Of course, they shut him down with something that was all fluff. That was the only argument that made sense. Lawyers around the globe will be super offended with this courtroom drama that looks too easy, even for fiction. My point here is that was he really seeking love? It is impossible to find love if you’re treating women like the clothing section of an e-commerce portal. I am sorry but you got to invest yourself in a person and if you are talking to so many people at one go, it is highly unlikely. Fear of intimacy? Yes!

It is so unrealistic and predictable

Firstly, why are women going gaga over this Nick guy? Okay, he has these sweet sad eyes and a pleasant sense of humour but let’s not get distracted by that. It’s so easy – winning the lawsuit, Nick overcoming his fear of intimacy, etc. And their biggest challenge was to hide their romantic connection? Seriously? On top of that, it is so predictable, for a moment I thought I was gaining psychic abilities. I could tell each and every twist (if you can call those that) in the story, including the ending.

ALSO READ: I Tried Dating Apps And Realised They Are Full Of Commitment Phobic And Emotionally Damaged Men

It is inclusive but at what cost

Love, Guaranteed showed diversity in its cast and characters. You will see several black characters and there’s even a Mrs Kapoor on phone. We also have Susan’s accountant, a homosexual man and it’s great. I am glad that this movie scores high on representation and diversity but what’s with the stereotyping? A gay man doesn’t have to be all cheeky and sound like the fashion editor of an entertainment magazine when he actually works at a law firm. I guess we can’t have it all.

This is like someone gave you a class 4 math problem to solve. But then again, sometimes, we do like to do simpler, dumber things – especially when things around us get overwhelming. Consider this movie that and we are good.

ALSO READ:This “Self-Married” Woman Returned To Her Ex-Fiance. Confused? Here’s Decoding Sologamy And Being “Self-Partnered” For You